The wedding of Prince Harry and Meghan Markle — or, if you prefer, of the Duke and Duchess of Sussex — was a collision between the United Kingdom and the United States, a geopolitical tango in which a particular sort of American ethos definitively took the lead. For those who’ve surmised that Meghan may meaningfully change the public face of Britain’s monarchy, Saturday’s wedding seemed to provide ample evidence. For the many millions watching worldwide, it bore the imprints of a guiding sensibility that was passionate, globally engaged and — relative to the rest of the royals — downright breezy.

This became clear in the moments before Meghan even entered the chapel. Prince Harry, evidently a nervous groom, transmitted anxiety through the screen. Other members of the royal family seemed even less at ease, seemingly because of an odd paradox: Their pleasant remove from contemporary digital life has made them vastly less comfortable on camera than most of their subjects. Her motorcade may have arrived with down-to-the-minute British punctuality, but Meghan strode out with an un-royal sort of confidence. In a simple and clean dress and one bit of ornate finery — a tiara whose encrusted jewels set off her Drybar-chic messy bun — she held a pose outside the chapel for a long moment as her train was being arranged, and used the time to wave to members of the assembled crowd with a mood less of noblesse oblige than of amiable openness.

Perhaps it’s her training as an actress that made her seem vastly more comfortable than anyone else in the room, at least at first. With a slightly arch smile that never faded, Meghan seemed better suited to be the center of attention than the family whose members are born to be seen. In her company, Harry, too, seemed to relax; the game of psychoanalyzing royals based solely on body language and snippets of attempted lip-reading got vastly more fun.

As things got underway, though, Meghan’s ease seemed to come from the fact that the ceremony reflected her and her new husband’s sensibilities and their decisions — especially at a style of wedding that’s usually hemmed in by tradition. Meghan’s pathbreaking status as a biracial American bride in a royal wedding echoed through the proceedings: Surely this was the first wedding in Windsor family history to feature a black American bishop declaiming at some length about the power of love. Rev. Michael Curry’s address was political — not in the way many sermons are outside of royal weddings, but in a way that cannot possibly be made palatably bland for all audiences. He spoke with fervor and with volume about love, and the ways in which it might extend beyond individual couples and toward greater justice and respect among all humanity.

That it wasn’t made up of platitudes felt like a provocation; its engagement with the world around us, citing both the mixed blessing of social media and the experience of American slaves, made it clear. The sermon shook viewers at home out of complacency, and seemed on television to rattle various royals. (Everyone will have their favorite cutaway; mine was to Kate Middleton, Meghan’s sister-in-law and the bride at a far more staid royal wedding, glancing briefly but significantly at Camilla, Duchess of Cornwall.) It was followed by a gospel choir singing an arrangement of the soul classic “Stand by Me.” Previous royal weddings had been ones at which the world was meant to look in awe; this was a wedding to which the world had been invited. That it didn’t seem to play in the room is precisely the point.

A bride can say little at her wedding except her vows. But Meghan expressed a confident readiness to exist on the world stage as the closest thing to one’s own person as a member of the royal family can be. And in choices made as part of a couple, Meghan made clear that her corner of the monarchy will be one marked by engagement and pursuit of justice and charity. It may not be easy: She joins a family that has spent the years since World War II in skittish retreat from the world marked by momentary attempts at engagement.

To be sure, the Queen and her retinue have learned a good deal about the moods of its subjects since its mishandling of Princess Diana, whose charitable impulses and whose emotional openness they never understood in life and whose sterling reputation they failed to reckon with, at first, in death. But the modern royal has, before Meghan, looked more like Prince William or Kate — a figure who seems less fussily old-fashioned than their ancestors but who still avoids politics or, really, any topic of interest at all. They let the Windsor legacy do the talking. Meghan has already put that legacy to work in intriguing ways, proving adept at working within, and beyond, traditional venues and strictures. When a sermon about what love really means when it comes to how we live in society happens at a royal wedding, it redounds around a world that’s ready to hear it.

Many royals shun the spotlight, given all the headaches that come with it. Meghan, shrewd in her choices and earnest in her passions, lets her light shine, to quote the gospel song that played as guests exited. Within the bounds of royal tradition, Meghan has already squeezed in a wedding that reflected meaningful thought and concern for the world. One wonders what she’ll be able to accomplish with the tools at her disposal now that she’s a member of the family. 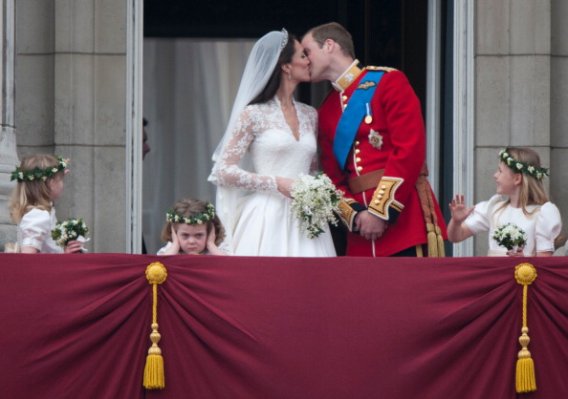 People Really Want to Know Where the Hilariously Grumpy Girl From Prince William and Kate Middleton's Wedding Is
Next Up: Editor's Pick