By Jennifer Calfas and Jamie Ducharme

The suspect in the Santa Fe High School shooting who police arrested Friday used his father’s guns to carry out the attack that killed 10 people and injured 10 others, authorities said.

The suspect was identified by authorities as 17-year-old Dimitrios Pagourtzis, a student at the Santa Fe, Texas, school. He was booked in the Galveston County Jail and is being held on capital murder with no bond, according to the county sheriff department. One to two other people were questioned by police about the shooting, Texas Gov. Greg Abbott said.

The suspect kept notes in his journal, computer and phone that indicated that he wanted to commit a shooting — and commit suicide, Abbott said. But, Abbott added, Pagourtzis ended up turning himself in to authorities. The suspect admitted to the shooting, according to a probable cause affidavit.

There were no clear red flags about the suspect as there were with other suspects in school shootings, Abbott said, and the suspect had no police record. Abbott did, however, point to a T-shirt the suspect shared an image of on social media that read “Born to Kill.” Texas Lt. Gov. Dan Patrick also told Fox News that the shooting suspect “does not appear…to have had any issues with the school.”

Representatives from the Houston branch of the FBI and local law enforcement officials did not respond immediately to a request for comment from TIME. The Santa Fe Independent School District asked anyone with information on the suspect or the shooting to reach out.

Santa Fe High School was fully evacuated Friday amid the horrific incident — which is the 22nd school shooting this year, according to estimates from CNN. Two Santa Fe Independent School District resource officers were at the school at the time of the shooting and confronted the suspect. Bombs were found on campus and elsewhere; police are working to find any more explosives in the area. School officials told residents to call 911 if they found any suspicious items.

Here’s what we know about the suspect in the Santa Fe High School shooting.

Who is the suspect in the Santa Fe High School shooting?

Pagourtzis was a student at Santa Fe High School and played junior varsity football. He also participated in his local Greek Orthodox church, according to the AP, and danced in an annual festival for the church last fall.

“He is a quiet boy,” Father Stelios Sitaras of Assumption of the Virgin Mary Greek Orthodox Church in Galveston, Texas, told the AP. “You would never think he would do anything like this.”

KHOU, a Houston-based television station, reported his social media profile included a photo of a T-shirt Abbott referred to, as well as images of a coat with Nazi symbols.

What kinds of guns did the Santa Fe shooting suspect use?

The suspect used a shotgun and a .38-caliber revolver, Abbott said. Texas Sen. John Cornyn said the shotgun had a shortened barrel, the legality of which is under investigation, the AP reports. Cornyn also said authorities found homemade explosive devices, including pipe bombs and pressure cooker bombs, in Pagourtzis’ car.

Where did the Santa Fe shooting suspect get his guns?

The suspect used his father’s guns to carry out the attack, Abbott said. He did not legally purchase or own the firearms himself, and it is unclear if the father knew his son had taken them from him.

“If you’re a parent and you own guns, lock your guns safely away,” Patrick said in a press conference after the attack.

Are there any other suspects in the Santa Fe High School shooting?

One or two other people of interested were questioned by police, Abbott said. The first was at the scene of the crime and had “suspicious reactions” to it, and the other may have “certain information” relevant to the attack, the governor said.

As for the bombs found by police, Abbott said “there’s no reason to suspect any person any other than the shooter made those devices.” 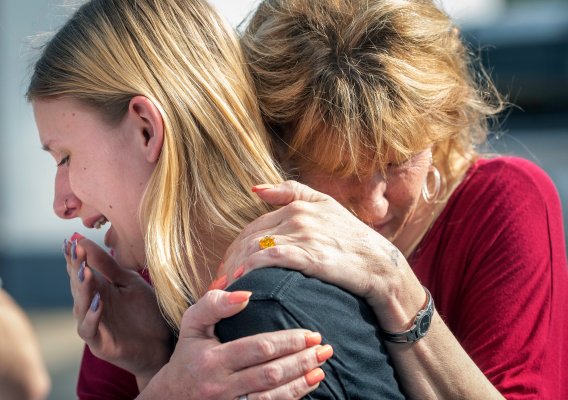 10 Killed in Texas School Shooting
Next Up: Editor's Pick