After months of anticipation, Prince Harry and Meghan Markle officially tied the knot in front of around 600 guests at St. George’s Chapel on Saturday. During the ceremony, The Kingdom Choir performed a rendition of “Stand By Me.”

The hit 1961 blues ballad wasn’t the only song performed at the wedding, but The Kingdom Choir’s “Stand By Me” performance was probably the most significant.

Originally performed by American singer-songwriter Ben E. King, and written by King, Jerry Leiber, and Mike Stoller, the chart-topping track has been covered by more than 400 artists, ranging from Otis Redding to John Lennon to Tracy Chapman. In fact, according to the music licensing company BMI, it was the fourth most widely recorded song of the 20th century.

In 2015, just one month before King’s death, “Stand By Me” was deemed “culturally, historically, or aesthetically significant” enough to be inducted into the Library of Congress’ National Recording Registry. “I think this is one of the greatest moments of my life,” King told CBS News at the time.

A song about enduring love, “Stand By Me” is, of course, a popular wedding tune. But for many, its lyrics also pack a deep political message. When “Stand By Me” first rose to popularity during the civil rights movement, it was used as a rallying cry for solidarity amongst people of color.

Markle, whose mother is black and father is white, may not be the first biracial royal. However, according to Anna Whitelock, a royal expert and director of the London Centre for Public History and Heritage, Markle’s marriage to Prince Harry represents a more inclusive royal family.

Considering the history behind “Stand By Me,” the predominantly black Kingdom Choir performing the song at Markle’s wedding to Prince Harry seems to be symbolic of this transition. 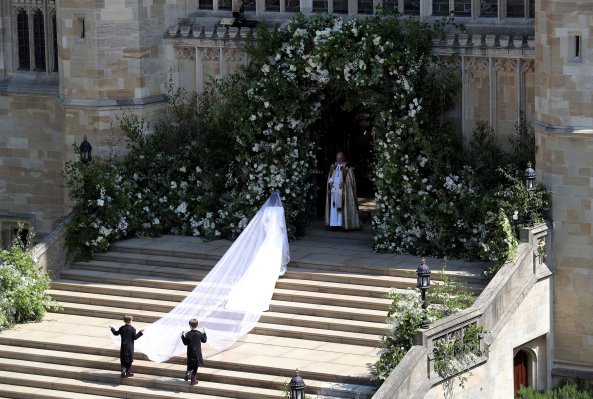 Every Detail About Meghan Markle's Givenchy Royal Wedding Dress
Next Up: Editor's Pick