The U.S. and Australia Had Mass Shootings One Week Apart. There Was a Crucial Difference in How They Responded

Greg Zanis lines up crosses he built in front of Santa Fe High School on May 21, 2018 in Santa Fe, Texas.
Scott Olson/Getty Images
Ideas
By Belinda Luscombe
Luscombe is an editor-at-large at TIME and the author of Marriageology: The Art and Science of Staying Together.

On May 11, a West Australian farmer shot and killed his wife, daughter and four grandchildren, then called the police to report it. He shot himself before they arrived. Mass shootings are extremely rare in Australia, which regulates firearms heavily; this was the nation’s first incident in which a gun was used to kill more than five people in 22 years.

A week later, a 17-year-old student at Santa Fe high school in Texas opened fire on his classmates, killing 10 people, including a teacher and a foreign-exchange student, before he was apprehended and disarmed by school safety officers. It was the 22nd shooting in an American school this year.

The reactions to the two incidents could not be more different.

Most Australians of all political stripes, including gun owners, accept the core tenets of its firearms legislation and gun buyback program, which was instituted by a conservative government in 1996 after a gunman killed 35 people in a cafe in Tasmania. At the time, it was the worst such event in history; it has since been surpassed many times over, including in Las Vegas and Orlando. This does not mean Australians no longer like shooting. The country punches well above its weight in Olympic medals for the sport. It also does not mean Australians have excessive belief in their leaders; only 45% of them said they trusted their government in a 2017 OECD survey.

So, after the West Australian shootings, the national discussion did not center on whether gun laws should be stricter or looser. Guns are permissible but heavily licensed in Australia. Farmers are generally allowed certain weapons to protect their crops and livestock, but the guns have to be locked up and ammunition must be stored separately. Very few credible proposals were put forward to further restrict their access.

The focus instead was squarely on what made the apparently well-liked farmworker Peter Miles break. Was he an ordinary person whose mental health had been compromised by depression or the drugs he was taking for it? Or should he be held in disrepute as another perpetrator of domestic violence? (Most of the victims of multiple shootings in Australia since 1996 have been members of the same family either in a murder-suicide or a dispute with neighbors.)

In stark contrast, the reactions to the mass shooting at a high school in Santa Fe were all over the place. The Lieutenant Governor of Texas, Dan Patrick, variously laid blame for school shootings with school design (too many doors), violent video games, a culture that devalued life, unarmed teachers and irresponsible gun-owners; the Texas Police Chief Art Acevedo pleaded with people to stop saying guns weren’t the problem, while a Santa Fe student, Monica Bracknell insisted that in fact guns weren’t the problem.

Oliver North, the newly installed president of the NRA, opined that school shootings were brought on by the over-consumption of psychiatric drugs like Ritalin, and of violent movies. “We are trying like the dickens to treat the symptoms, not the disease,” he said. Others have laid the blame on toxic masculinity and bullying.

Meanwhile, Kelly Clarkson, a Texan, channeled many people’s frustrations when as host of the Billboard Music Awards on May 20, she called for a moment of action rather than a moment of silence. In that vein, Texas Governor Greg Abbott says he will convene a series of round-table discussions on school shootings and has spoken up (again) in favor of stronger background checks and more metal detectors at schools. MSNBC host Hugh Hewitt offered a fashion solution: a ban on students wearing overcoats.

In other words, every time there’s a shooting in America, each person brings out his or her favorite ax and warms up the grinding wheel, irrespective of the circumstances that led to the event. Gun violence is a handy symptom for any societal ill that one faction would like to see taken more seriously: the real problem is not guns — it’s men or drugs or sin or technology or mental illness or adolescence. Instead of taking action, those in leadership busy themselves playing whack-a-mole with root causes that do not line up with their views of the world.

Here is an advantage of addressing the availability of guns: it’s a variable that can be controlled. Once there are sufficient safeguards in place to create a bottleneck through which guns can be obtained only with planning and forethought and patience, and are then required to be stored in sensible ways, other problems are thrown into relief and can be dealt with in an orderly fashion. To channel Oliver North: once you treat the most obvious and distressing symptom, then you can begin to rule out a whole bunch of potential theories on what the real disease is.

If the Santa Fe shooter lived in a country in which guns had to be kept in a secured safe with ammunition locked up elsewhere, for example, there’s a much better chance that he would have had to get past an adult who loved him and could have diverted him from his tragic course. In fact, Lt. Gov. Patrick pleaded with parents to secure their weapons. Texas has a “negligent storage law,” but it only covers cases in which children younger than 17 can get access to weapons, even though the mental condition that leads to murderous intent has no age limit.

As the horrible familicide in West Australia has proved, well-thought-out firearms legislation does not prevent every single mass shooting. But it can make teasing out the reasons why a person might use a gun to kill a little easier to discern, and for solutions to that problem to come at a much lower cost of life. 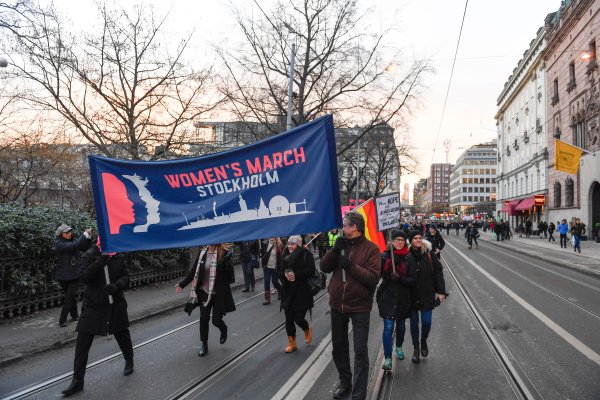 Sweden’s New Sexual Consent Law Is a Huge Victory for Women
Next Up: Editor's Pick