By Suyin Haynes and Siobhan Morrin

The guest list for Prince Harry and Meghan Markle’s hotly anticipated royal wedding Saturday may be tightly under wraps, but some world leaders have let slip on their plans to congratulate the newest royal couple.

While Harry and Meghan’s wedding at Windsor Castle will not host as many international leaders or political figures as the 2011 nuptials of Prince William and Kate Middleton, dignitaries from French president Emmanuel Macron to President Donald Trump have revealed what they plan to present as wedding gifts to the pair.

In their planning and preparation for the big day, Harry and Meghan are breaking from tradition in a variety of ways. The gift list is no exception; the couple asked for donations to seven charities of their choice instead of traditional presents. Kensington Palace confirmed via Twitter last month that while the couple do not have any official ties to the charities they have chosen, they represent a range of issues that the couple are passionate about, ranging from sport for social change to the Armed Forces.

Despite that request, gifts are still on their way. Here are some of the presents international figures plan to give the couple in celebration of their royal matrimony.

The Prince and Princess of Lesotho

Prince Seeiso and Princess Mabereng of Lesotho are two of the few known world leaders that will be in attendance on May 19. Prince Seeiso and Prince Harry met during Harry’s travels in the Southern African country in 2004, and two years later, the pair founded Sentebale, a charity providing support for vulnerable children living with HIV in the region.

The Prince and Princess will be presenting Harry and Meghan with custom Wonderbags as a wedding gift on Saturday on Saturday. A non-electric, portable slow cooker, the Wonderbag was invented in South Africa and has helped women and children across the continent and beyond to address critical fuel shortages, combat deforestation, and free up time to gain education or employment. Harry and Meghan will also receive an open invitation to visit Lesotho to see the Wonderbags at work in local communities—a thoughtful gift ,given Meghan’s activism and humanitarian work committed to empowering women and girls.

With a nod to the slick and suave (and fictional) British spy James Bond, French President Emmanuel Macron has selected a 007-themed gift from luxury fashion brand S.T. Dupont to give to the couple as they tie the royal knot. (Macron, who is not invited, says he plans to watch the ceremony on TV.) A “purveyor to the world’s greatest names,” the French brand can add Prince Harry and Meghan Markle’s names to that list. They will receive a bespoke pen and a heritage lighter.

It’s not the first time S.T. Dupont has created a gift for a British royal wedding. In 1947, then French president Vincent Auriol presented a bespoke travel case to the future Queen Elizabeth in celebration of her marriage to Prince Philip, a tradition that was revived by former President Nicholas Sarkozy, who gifted the Duke and Duchess of Cambridge a travel case for their wedding in 2011.

Although President Trump and First Lady Melania Trump are not invited to the wedding, they will still be honoring Harry and Meghan’s wedding gift wishes. White House Spokesperson Lindsay Walters confirmed Thursday that the Trumps will be making donation to one of the seven charities chosen by the royal couple in lieu of a gift.

New Zealand’s Prime Minister Jacinda Ardern announced that the government will make a charitable donation to celebrate Harry and Meghan’s nuptials. She told reporters that the official donation of NZD 5,000 would go to Pillars, a charity in the country that supports the children of prisoners, and which is celebrating its 30th anniversary on the weekend of the royal wedding. Though the charity is not on the list of seven picked by the pair, Ardern told reporters that the couple were happy that the wedding would be acknowledged by the donation. “The couple are both very interested in initiatives that support vulnerable children and young people,” she said.

According to Australian media, the country’s prime minister has promised two gifts for Harry and Meghan’s big day. The first, larger gift, will be a charitable donation of an unspecified amount—and the second Turnbull said he would not reveal till the wedding day, saying only that it was “very Australian and appeals to their interests.”

Though the country’s official gift may remain a secret, one of Australia’s regional governments has chosen to make its own offering to celebrate the couple’s big day. The government of New South Wales has named two koalas at Taronga Zoo, near Sydney, after Harry and Meghan, and the region’s leader, Premier Gladys Berejiklian told local media that the couple could visit them next time they visited Australia.

Canada’s Prime Minister Justin Trudeau announced that the Canadian government will donate $50,000 to the youth sports-focused charity Jumpstart. Trudeau’s office released the statement an hour after Harry and Meghan’s ceremony on Saturday morning. “Today, Canadians joined in celebration as Prince Harry and Meghan Markle married,” the release read. “To celebrate their union, Canada will donate $50,000 to Jumpstart, a Canadian charity dedicated to making play and sports more accessible to children from disadvantaged backgrounds. Since 2005, Jumpstart has helped more than 1.6 million children of all abilities get out on the field and be part of a team.”

Trudeau closed with best wishes for the couple. “A lifetime of happiness, and all the best as they start this new chapter together. We look forward to welcoming them on a future visit to Canada,” he wrote. 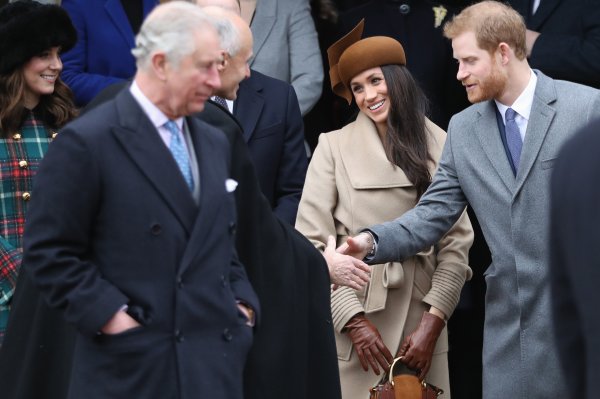 Meghan Markle Should Walk Down the Aisle Alone and Not Pass From One 'Owner' to Another
Next Up: Editor's Pick