Jay Aubrey Jones finds it all amusing (and a bit confusing). The 64-year-old actor-singer was in the middle of working a temp job at a financial institution in New York City on Thursday when TIME spoke to him about his viral recording of the word “laurel.”

“Well, I found out yesterday,” the Atlantic City native said with the crisp enunciation of a trained professional, “and I thought, well, it couldn’t be that huge. Then I heard the recording again online and I realized what a brouhaha this whole thing was — and it just amused me no end.”

To some people, Jones’ baritone utterance of the word “laurel” sounds like a higher-pitched voice saying “yanny,” a phenomenon that has become the latest obsession of meme-consumers everywhere, as they turn to friends and neighbors to ask, “Well, what do you hear?” People have different answers, in short, because of the complexities in how the human brain processes sound.

Jones, who has appeared on Broadway and television, says that he has often done temp jobs between his bouts on stage, which range from working as an understudy in Cats to playing a “comically passive-aggressive priest” on the Michael J. Fox Show. He was in the midst of a temp job at JPMorgan Chase about a decade ago when a colleague asked if he’d be willing to take part in a project being done by Vocabulary.com, which is where this all began.

That site, a reference used by word hounds and educators that helps teach people new words, was in the midst of producing recordings for a vast array of words in standard English, about 200,000 in total. The team, explains Chief Technology Officer Marc Tinkler, wanted the speakers who worked on those recordings to be familiar with the pronunciations of the International Phonetic Alphabet, something that many singers are taught as they learn to vocalize operas and such in foreign tongues. So in 2007, they started looking for six to eight trained vocalists to work on a project that lasted about six months.

Jones learned what is known as IPA while studying drama at Syracuse University, he said, “And it has stood me in good stead lo’ these many decades.” So he did an audition with Vocabulary.com and was soon hired to utter words in front of microphone, one of which was “laurel.“

“I recorded my batch of words,” he said, “and I thought that was that.” In total, he recorded some 36,000, according to Vocabulary.com.

The recording wound its way onto the internet 11 years later through a student who was using Vocabulary.com to study words earlier this month and was struck by the bizarre experience of hearing “yanny” when she clicked on the audio for a word meaning “a wreath worn on the head, usually as a symbol of victory.” So she recorded the recording and posted it on social media to see what others heard.

The speaker himself says that he is, largely, on Team Laurel. “More often than not, I hear ‘laurel,’” Jones said. “I can hear a slight trace of ‘yanny.'”

When asked what he makes of the brouhaha about the recording, he says he simply doesn’t know. “That’s what makes me laugh about this,” he said, “I’m intrigued and I wish I could sit people down and ask: ‘Why, with all the things that are going on in the world right now?'”

Tinkler, the Vocabulary.com executive who has also found his company at the middle of a cultural frenzy, has a few ideas. “It’s mind-bending,” he said, noting that he heard “yanny” when his colleagues alerted him to the sensation this week.

While we may all be familiar with optical illusions, an auditory illusion is a more novel experience, one that suggests much bigger, almost existential, questions: Are we all experiencing sound the same way? Are our brains being selective in ways we aren’t aware of, giving different people different versions of reality? “When you’re standing next to someone who is listening to the exact same recording as you and they’re hearing something totally different,” he said, “that’s the thing that makes it so astounding.” Lookups for the “laurel” entry on their site have been spiking for days.

He also notes that, while this might seem like a superficial thing to focus on, the Great Laurel-or-Yanny Debate of 2018 is also an educational moment, driving people to learn about how sound works and perhaps broaden their vocabulary. “Our feeling is anything that gets people talking about words or learning words is going to be good,” Tinkler said.

For his part, Jones is continuing about his business. He broke off multiple times during the call to attend to tasks related to his temp job and is preparing for a performance with the Oratorio Society of Queens this weekend. When asked if his training in pronunciation has served him well over his 42-year career, he said it has. “I think the great thing about this business is the ability to communicate,” said Jones, “and I’ve always been taught about the necessity of good clear speech, even as far back as when I was a small child.”

Correction: The original version of this article misstated the role that Jay Aubrey Jones played on the Michael J. Fox Show. He played a priest, not a judge. 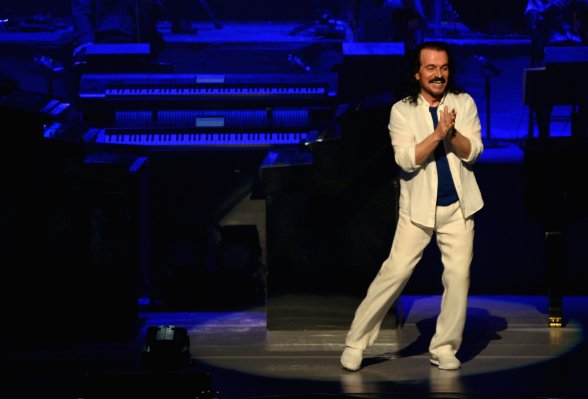 Thank Goodness Yanni Is Stepping In on the Raging Viral 'Yanny' Vs. 'Laurel' Debate
Next Up: Editor's Pick