There are Ryan Reynolds fans. There are Deadpool fans. And then there’s this red carpet reporter, whose adoration of the smart-mouthed anti-superhero goes way, way back. In fact, Reynolds himself was so impressed by the reporter’s fandom that he popped the question in the middle of the interview.

“I’ve been a Deadpool fan since I was a little kid,” prefaces the IGN reporter as he gets the chance to chat with Deadpool 2 star Reynolds on the carpet. “Here’s my fifth grade English book report. Can you take a look at that? I got a B- on that.”

Reynolds is, understandably, overwhelmed and amazed by the reporter’s dedication to the character — especially since such a young age. (Deadpool is not exactly a PG-rated personality, to say the least.)

“Max, you did a book report on Deadpool in the fifth grade. Will you marry me?” Reynolds finally asks. (Blake Lively who?) Unfortunately, Reynolds does not drop to one knee to deliver the proposal, but it certainly comes across as heartfelt. And while the reporter manages to admit that he’s actually spoken for already, Reynolds quickly waves away that excuse with a workaround.

“Great, well we’ll move to a state that allows it,” he offers.

Reynolds is currently doing the rounds to promote the Deadpool sequel, which hits theaters May 18 and co-stars Josh Brolin as time-traveling baddie Cable. 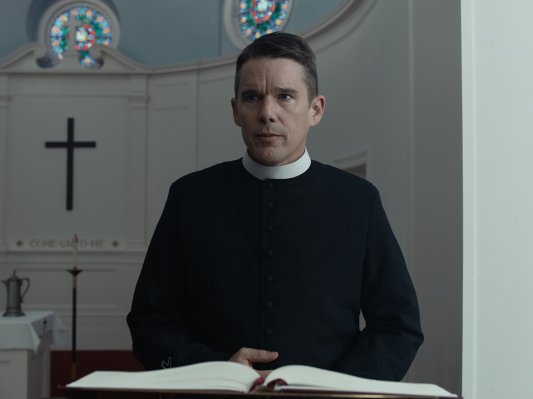 Ethan Hawke Endures an Existential Crisis Worth Watching in First Reformed
Next Up: Editor's Pick