Meghan Markle's Father Didn't Walk Her Down the Aisle. That Choice Has More History Behind It Than You May Think

Meghan Markle leaves the Cliveden House Hotel, for her wedding at St George's Chapel at Windsor Castle to Prince Harry, May 19, 2018.
Darren Staples—Reuters
By Lily Rothman

In some ways, it was a last-minute thing: It was only Friday that Kensington Palace announced that Prince Charles would walk his new daughter-in-law Meghan Markle down the aisle at her wedding to his son, Prince Harry. Her own father Thomas Markle had backed out—with his health suggested as the reason for his absence—earlier in the week.

But while Markle’s decision to begin the walk down the aisle alone and to leave out any wording about “giving away” the bride was hailed by some as a feminist innovation, her walk without her father actually has years of tradition behind it.

Though the Church of England wedding ceremony is based on centuries-old services, the bride’s progress to the groom has happened in any number of ways, and pretty much any choice made by Markle or any other bride could be seen as keeping with an element of tradition.

In fact, in early Christian weddings in England the aisle wasn’t really involved much at all.

As Sally Dixon-Smith has written for the BBC’s History Extra, in Medieval Europe a wedding could happen pretty much anywhere, with or without a church. The Church began to encourage the involvement of a priest in marriage in the 13th century, before the Church of England split from Roman Catholicism. The decision to move the wedding to the physical space of the church was (along with the requirement of a dowry and the issuing of public banns) an attempt to safeguard against the clandestine, informal weddings that young people had previously been able to stage with or without their parents.

But during that early time, historian Susan Mobley has written, the blessing provided by a priest was thought to be (though some scholars disagree) given at the door of the building rather than at the altar—in a literal interpretation of the instruction to marry in the presence of the church. It was during the Reformation in the 16th century, she explains, that the marriage ceremony was moved inside the church.

It was only after moving the location of the exchange of vows that the walk down the aisle became a bigger deal.

So who would walk with the bride, if anyone?

One early clue comes from the 1549 Book of Common Prayer, from which Church of England ceremonies are still derived. In that text, this question shows up: “Who geveth this woman to be maried to this man?” The minister, the instructions continue, receives the woman “at her father or frendes handes,” then offers her hand to the groom. In other words, her father might “give” her, but a friend would do the trick too.

This 16th century change to the English marriage rite wasn’t the first time that the father got involved. In Britain, as in many places, women had long been considered essentially the property of men, first their fathers and then their husbands. The phrase “give away” suggests a lot about the woman’s role in this exchange from one man to another. In early Anglo-Saxon society, the father’s control of a child, and the husband’s control of a wife, was “absolute,” Sir James Henry Ramsay wrote in his 19th century book The Foundations of England. It was permitted to sell one’s child and, though authority over a son ended when he became an adult, that wasn’t true for a daughter.

But Ramsey explained that, in that early period, a wedding had two key components, the betrothal—the actual wedding part—and the “giving-away.” The pledge of consent to marry was the formal ceremony, and it was followed by the transfer of the bride into the custody of the groom.

But in the centuries just before the English Reformation, the father wasn’t expected to give the bride away; his role “was complete with the negotiations between the families at the time of betrothal,” according to George Monger’s Marriage Customs of the World. Normally, a brother or some other friend, often the equivalent of the best man, would bring her to the church and transfer her to her husband. Though the father might hang around for other reasons—historian Susan Waggoner recently told Brides.com that the father’s presence was a good way to keep a groom from reneging on an arranged marriage—walking her down the aisle wasn’t his job.

Monger notes in the 1700s and 1800s, when English weddings tended to take place in the middle of the day, fathers from families that were not in the upper classes would not have been expected to attend the wedding at all; they were expected to be at work.

And it wasn’t just the working classes where the father wasn’t involved in the walk. Monger also provides many examples (including Charlotte Brontë) of women being given away by some other relative, sometimes a woman, when her father objected or was not available. In 1858 Queen Victoria—who set many of today’s most enduring wedding traditions—was walked down the aisle by her uncle at her wedding, which took place after her father died, and she herself walked two of her daughters down the aisle, after their father died.

Given all this history in which the bride was not walked down the aisle by her father, how has this tradition become so common?

In 2010, the Crown Princess of Sweden upset some of her countrymen— including the head of the Swedish church—by choosing to have her father the King escort her down the aisle, rather than following the more typically Swedish tradition of walking down the aisle with her groom, seen by many as a better representation of equality within the marriage. In explaining her choice, some historians pointed to a perhaps surprising source of the idea: American movies.

Such a catalyst wouldn’t be that surprising. Movies have been credited with helping make supposedly age-old traditions seem like the norm, including those associated with a wedding.

In fact, history is full of a much more diverse set of options when it comes to how to do a wedding “correctly,” and these days that diversity is returning. As a quick glance at any wedding website will show, many brides are choosing to have both parents or neither walk them down to aisle, either to avoid the implications of being given away like their father’s property, to reflect a more complicated family situation, or to honor the influence of both parents. 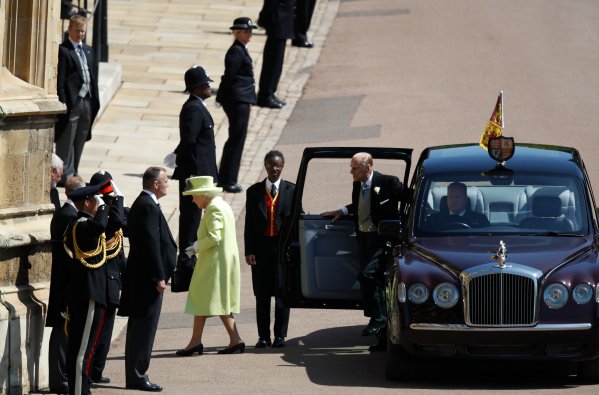 Why Queen Elizabeth Wore Bright Colors to the Royal Wedding
Next Up: Editor's Pick