A third official engagement photo of Prince Harry and actor Meghan Markle taken at Frogmore Estate in Windsor, released by Kensington Palace on Dec. 21, 2017.
Alexi Lubomirski/REX—Shutterstock
By Olivia B. Waxman

After Prince Harry and actor Meghan Markle tie the knot at St. George’s Chapel at Windsor Castle on Saturday, they have a busy day planned: the wedding reception, hosted by Prince Charles, will be held later that evening at Frogmore House, and more than 200 guests are expected to be in attendance.

Royals-watchers may remember the location because the couple took engagement photos there — but history buffs might know about it for a different reason.

In some ways, Frogmore can be seen as both a fitting and awkward choice for the wedding reception.

On the one hand, the venue choice continues a nearly 300-year tradition of British royals going to the estate and gardens for joyful occasions. King George III purchased the land in 1792 as a country retreat for Queen Charlotte (who, coincidentally, some experts believe was biracial, as Markle is). Later remodeled by architect James Wyatt, it got its name for the plethora of frogs in the low-lying marsh areas. The decorating over the years showcases how royal residents added their own personal touches over the years, from Queen Charlotte’s floral-patterned furniture to Queen Mary’s so-called “Black Museum” room with her collection of black mâché furniture.

Elizabeth the Queen Mother, the mother of Queen Elizabeth II, spent part of her honeymoon there with King George VI in 1923, when they were known as the Duke and Duchess of York.

But, on the other hand, Frogmore is also literally a place of rest: On the west side of the gardens, there is a mausoleum that houses the remains of Britain’s second longest-reigning monarch Queen Victoria — who is credited with popularizing white wedding dresses — and her husband Prince Albert. West of Frogmore House is a separate mausoleum on a wooded mound, which houses the remains of Victoria’s mother, the Duchess of Kent.

It is thought that Queen Victoria, after inheriting the estate from Princess Augusta in the early 1840s, had her meddling mother live in Frogmore to keep her at a distance.

In addition to representing Victoria and Albert’s devotion to one another, the mausoleums appear to have been built for practical reasons. Royals had historically been buried in Westminster Abbey, but “Westminster Abbey got full,” as Robert Lacey, a historian and expert on the British Royal Family who has consulted on Netflix’s The Crown and who recently appeared on British streaming service Britbox’s WED Talks series on the upcoming royal wedding. The Royal Vault that George III ordered built underneath St. George’s Chapel, where the wedding ceremony will take place, accommodated some of the overflow.

“When [Markle] walks down the aisle on Saturday,” Lacey says, “she’ll be walking over the remains, or very close to the remains, of the last king of North America, that’s George III.”

Like many of the royal residents of Frogmore who came before her, Victoria found that this modern house and its surrounding gardens uplifted her when she became a widow after Albert’s death in 1861. Though based in Windsor Castle, she regularly ventured the convenient half-mile distance to Frogmore, and would attend a memorial service held every year on the day of his death until the day she died in 1901. She even had the interior of the Aberdeen granite structure decorated with paintings and sculpture in the style of her husband’s favorite artist, the Renaissance painter Rafael.

“She spent more and more time there during her widowhood, sort of to get away from it all,” says Lacey.

But Lacey points out that there’s some awkwardness with the royal family and Frogmore, too, as some of the “outcasts” of the group are laid to rest there too.

Just south of Victoria’s and Albert’s mausoleum is the Frogmore Royal Burial Ground, where members of the royal family have been buried since the ground was consecrated in 1928. The individuals buried there include the only other American divorcée to join the royal family before Megan Markle, The Duchess of Windsor Wallis Simpson, and her husband The Duke of Windsor, formerly known Edward VIII, who abdicated to marry her.

“When the royal family went there and saw Wallis Simpson buried in the ground, there was a great sigh of relief — so I can’t imagine that [Saturday’s wedding guests] will be going to the burial ground,” says Lacey. “You just wonder whether all of these relatives on Saturday night are aware that the tomb of this so-called wicked woman is so close to where they’re celebrating.” 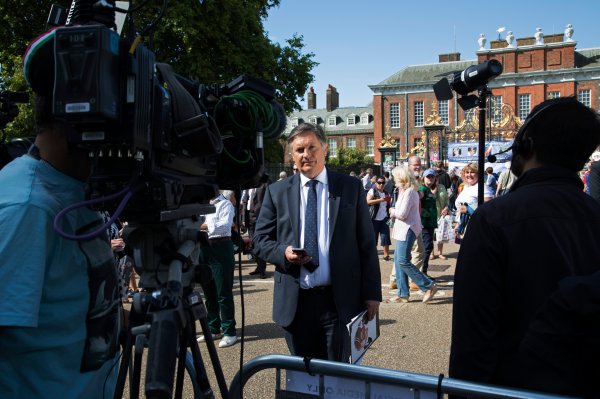