Commuters wait for train service to be restored after a severe thunderstorm downed trees that caused power outages resulting in several Metro-North lines being suspended at Grand Central Terminal on May 15, 2018 in New York City.
Eduardo Munoz Alvarez—;Getty Images
By Mahita Gajanan

Severe weather, including severe thunderstorms, high winds, and massive hail is hitting the Northeast and other parts of the U.S., causing power outages and travel delays for Monday night commuters. The stormy, wet weather is expected throughout the eastern part of the country over the next few days, according to the National Weather Service (NWS).

The NWS warned of flash flooding and other severe weather, as the strong thunderstorms are expected to continue throughout the week, including across the central part of the country.

But the storms have already wreaked havoc among travelers. Commuters waiting to board Metro North trains at Grand Central Terminal were left to crowd inside the train station after the Metropolitan Transportation Authority suspended service along the lines, following power outages.

AccuWeather reports that more than 500,000 people were left without power in New York, Connecticut, Pennsylvania and New Jersey on Tuesday afternoon.

The Weather Channel reports wind gusts can get as fast as 80 miles per hour, and that some tornadoes are expected. In parts of New York, including areas around the Catskill Mountains and mid-Hudson Valley, hail the size of baseballs thundered down, according to the Weather Channel. 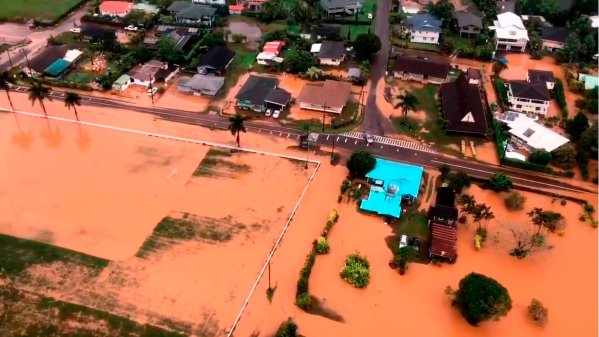