Meghan Markle Says Her Father Will Not Attend the Royal Wedding

Meghan Markle’s father, Thomas Markle, will not walk his daughter down the aisle during her royal wedding to Prince Harry at Windsor Castle on Saturday, Kensington Palace has confirmed.

In a statement, Markle suggested her father’s health was to blame for his absence. “Sadly, my father will not be attending the wedding,” she wrote. “I have always cared for my father and hope he can be given the space he needs to focus on his health.”

The statement comes days after a report said Thomas Markle would not attend the wedding amid heart problems and news that he had staged photo shoots. Meghan Markle’s half-sister, Samantha Markle, who said she has not spoken to Meghan in years, told the British morning show Good Morning Britain on Tuesday that her father sold photos of himself because he “can’t go anywhere without being followed” by the press.

On Wednesday, Samantha Markle, told the Australia show Sunrise that her father was prepping for imminent surgery for his heart issues, and added that he hoped to attend the wedding. Earlier in the week, a report surfaced that Markle’s father, who currently lives in Mexico, had suffered a recent heart attack. Soon after, Kensington Palace released a a statement asking for “understanding and respect” during the “deeply personal moment” for Markle and Prince Harry.

“This is a deeply personal moment for Ms. Markle in the days before her wedding,” the statement said. “She and Prince Harry ask again for understanding and respect to be extended to Mr. Markle in this difficult situation.”

Markle’s mother, Doria Ragland, is still expected to participate in the wedding as planned, which includes introductions to the royal family and the Queen. She and Thomas Markle have been divorced since Meghan was six years old. The rest of Meghan’s half-siblings were not invited to the wedding. 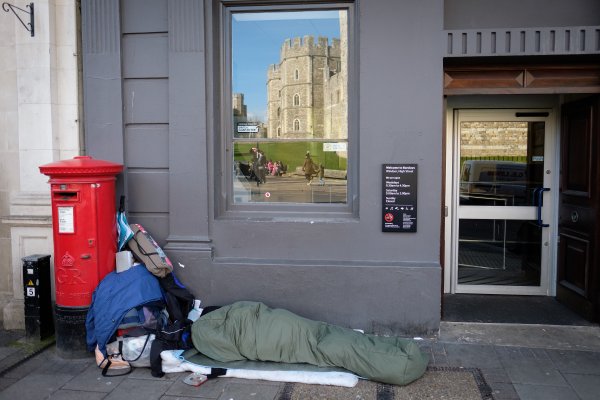 Police in Windsor Are Seizing Homeless People’s Belongings Before the Royal Wedding
Next Up: Editor's Pick