Leave it to Emilia Clarke — also known as Daenerys of House Targaryen, Khaleesi of the Great Grass Sea, Breaker of Chains, Mother of Dragons and, perhaps now, Queen of Red Carpet Shenanigans — to brighten up the 2018 Cannes Film Festival carpet with her joyful presence. While walking the crimson carpet for a screening of Solo: A Star Wars Story with fellow movie stars Alden Ehrenreich as the young Solo, Donald Glover as Lando Calrissian, Phoebe Waller-Bridge and Thandie Newton, it was impossible to miss Clarke’s buoyant smile.

The British Game of Thrones actress plays supporting character Qi’ra in the Star Wars origin story for popular character Han Solo, but she’s clearly stealing the show during this promo tour. (Well, so did Chewbacca — understandably so.) We just want to know: what jokes is Glover telling? Is Waller-Bridge secretly tapping her on the shoulder in between takes? Are the photographers this time around amazing comedians?

Or maybe fellow giggly attendee Alden Ehrenreich is the secret to her great mood?

US actor Alden Ehrenreich (L), British actress Emilia Clarke and US director Ron Howard arrive on May 15, 2018 for the screening of the film "Solo : A Star Wars Story."
ANNE-CHRISTINE POUJOULAT—AFP/Getty Images

Perhaps she’s just pleased that the film is finally seeing the light of day — and, so far, receiving a positive response from audiences despite the late-stage director switch-up. Solo: A Star Wars Story is out in theaters May 25. As for the final season of Game of Thrones, which Clarke is currently filming, we’ll have to wait until next year to see what happens with Daenerys Targaryen. 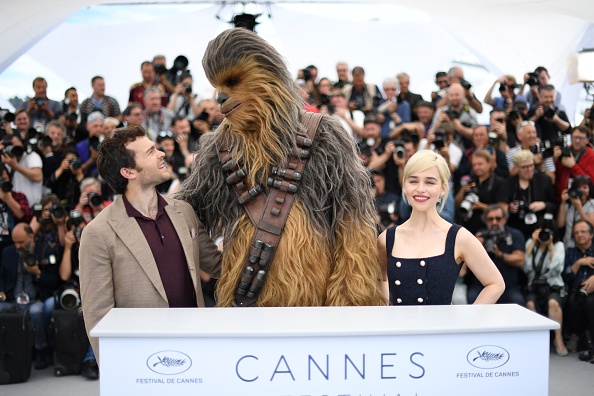 Chewbacca Is Living His Best Life at Cannes With the Solo: A Star Wars Story Cast
Next Up: Editor's Pick