Cannes Review: Spike Lee's BlackKklansman Is the Movie We Need Now—And It's Funny, Too

Director Spike Lee and actor Adam Driver, right, arrive for the screening of "BlacKkKlansman" at the Cannes Film Festival in southern France on May 14, 2018.
Anne-Christine Poujoulat—AFP/Getty Images
By Stephanie Zacharek

Though it’s an honor to have a film chosen for the competition slate at the Cannes Film Festival, we also live in an age where the positioning of films for Oscar season has practically become a blood sport. Almost any filmmaker would jump at the chance to show a film in Cannes. But the reality, more and more often, is that even if a movie is ready in time for the world’s biggest festival—and even if that festival wants it—a film’s producers might prefer to hold it for one of the early-fall festivals, like Telluride, Venice or Toronto. That shortens the time between a film’s premiere and that golden flash of a moment when the Academy, and every one else, starts thinking about the Oscars. Heaven forfend any of us should have to reach back as far as May to recall a movie or a performance we thought was terrific.

If you’re one of those Oscar prognosticator types, amateur or pro, I’m telling you right now to put a pin in Spike Lee’s BlacKkKlansman, playing here in competition. In the end, it might not be the movie that wins; but it’s one that deserves to win. Lee has made great movies (25th Hour), bold, memorable, topical ones (Do the Right Thing, Malcolm X) and a few you’ve probably forgotten (Da Sweet Blood of Jesus, Miracle at St. Anna). He’s prolific, and he’ll try something a little different every time. That fearlessness, as opposed to clinging to one definitive style or way of saying things, makes him one of America’s most valuable filmmakers. He always has a lot to say, but he keeps growing as a craftsman, too.

BlacKkKlansman is based on the true story of Ron Stallworth, a black Colorado Springs police officer who went undercover in the late 1970s to infiltrate the Ku Klux Klan. Lee recognizes the nutso potential of that premise and runs with it: Stallworth’s story is so wild you can barely believe it—but certainly not wilder than the virulent resurgence of white supremacy in this country, so extreme it goes beyond the reach of satire. BlacKkKlansman is both hilarious and exquisitely direct, and had it been made before November 2016, you might call Lee’s approach a little alarmist. But if anything, he’s restrained. This is an angry film as well as a hugely entertaining one, and Lee has complete control over its shifting tone, minute by minute.

Stallworth is played by John David Washington, who makes it wholly believable that a black cop could randomly pick up a newspaper, see a recruitment ad for the KKK, and just decide to dial up the local chapter: He poses as a white guy, obviously, unleasing a tirade against black people (though he uses another word) and Jews. His spew of hatred delights the guy on the other end of the line, Walter Beachway (Ryan Eggold), who invites Stallworth to come on down to meet some of the guys. Stallworth can’t go himself, obviously. So he enlists fellow cop Flip Zimmerman (Adam Driver) to go in his stead, though he continues to deal with Beachway and other members of “the organization” by phone. Eventually—remarkably—he reaches David Duke himself, the “National Director” of said “organization.” No one in it will actually use the “K” word—the group is striving to become a legitimate government force—but everybody sure seems to dig the robes and hoods and burning of crosses.

Duke is played, with reptile-dry, businesslike charm, by Topher Grace, but all of the performances here are terrific: Washingon and Driver play off one another with prickly breeziness and a kind of mutually protective bonhomie. At one point Stallworth sends Zimmerman, who’s wearing a wire, into a meeting with a KKK hothead; when the yokel starts setting Zimmerman up for a “Jew lie-detector test,” which Stallworth knows Zimmerman will fail, he springs to action. The sequence is half funny, half horrifying, underscoring the risks of dealing with angry, ignorant white folk who also happen to have guns.

Lee’s point is clear: If hate groups were dangerous and insidious in the 1970s, they’re much more so now, especially considering the momentum they’ve gained during the Trump administration. (And don’t think Lee fails to take a few well-aimed shots at that.) But what’s most remarkable about BlacKkKlansman is how inclusive it is. There’s another cop on the force, played by Frederick Weller, who’s a racist asshole. But the movie takes care to show that he’s an exception, not the norm. Lee points fingers only at the people who really deserve it. He doesn’t have time or energy to waste on anyone else.

Shot by Chayse Irvin (whose credits include Beyonce’s Lemonade), BlacKkKlansman is gorgeous to look at: A sequence in which Stallworth strides through an open field after a Klan target practice, collecting the empty shells, builds to one of the most chilling and poetic shots I’m sure I’ll see all year. And Terence Blanchard’s superb score has 70s R&B in its bones and symphonic drama in its heart. Lee has pulled out all the stops with this one—he knows how high the stakes are. The movie’s penultimate image is a photo of Heather Heyer, the woman killed last August in Charlottesville, Va., when a car plowed into a group of counter-protestors at a white-supremacist rally. The image caps the movie’s central idea: Racism isn’t just black people’s fight, it’s everyone’s fight. (BlackKlansman’s American release date, Aug. 10, coincides with the one-year anniversary of the Charlottesville riots.) The movie’s final shot, which I won’t give away, affirms how dire the circumstances are. To be heartbroken by your country, you have to love it in the first place. BlacKkKlansman is Lee’s anguished message of love.

The festival still has three days to go, but my time here is drawing to a close. Because there’s always too much to say and not enough time in which to say it, here are a few notable pictures to watch for: Christophe Honoré’s touching, bittersweet ’90s gay romance Sorry Angel; Lukas Dhont’s Girl, about a teenager’s drive to become a professional ballerina, even as she rushes toward another, even more painful transition; Alejandro Fadel’s grisly but weirdly poetic parable Murder Me, Monster; Hiokazu Kore-Eda’s delicate and wrenching family drama Shoplifters; and last but not least, Pope Francis: A Man of His Word, Wim Wenders’ impassioned, stirringly direct portrait of the man who represents our planet’s—and our world’s—best hope for the future. Please, oh please, let’s not mess it up. 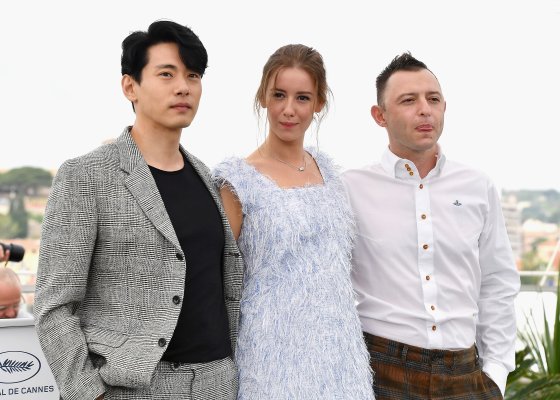