Demian Barrios has barely slept since Hawaii’s Kilauea volcano started erupting on May 3.

The lifelong volcano enthusiast, who describes himself as a “lava chaser,” has been running after every open fissure along the erupting volcano every day for the last 11 days. As a new fissure broke open and spewed rocks into the air on Sunday, Barrios, a professional photographer, was live streaming the action from the ground — including what he called “lava bombs” half the size of Volkswagen Beetle cars dropping to the ground around him.

“It’s really something that makes me feel alive,” Barrios, 37, tells TIME about lava chasing. “There’s an overwhelming sense of power and respect and love that you feel standing there being able to see that. It’s almost addictive.”

Barrios has been tracking volcanoes since moving to Hawaii’s Big Island in 1999. The practice has turned into far more than a hobby — in fact, Barrios says, his partner often jokes that he is having an affair with Pele, the volcanic fire goddess from Hawaiian mythology.

The Kilauea eruptions mark a historic turn from what Barrios typically experiences in his journeys to volcanoes — while most Hawaiians are accustomed to lava flows, they tend to be “repetitive,” he says.

Current eruptions from the Kilauea volcano have lasted nearly two weeks, destroyed dozens of homes and forced thousands of residents to evacuate. The most comparable eruption occurred in 1955 when a volcano erupted in Puna for three months, covering nearly 4,000 acres with lava, officials say.

It’s unclear when the lava spewing will end. But Barrios says he has to get out there to document what’s happening because a similar event may not happen again in his lifetime.

“This is bigger than Hawaii. It’s not something you can come back to later,” he says. “Already so many people have been affected — by doing this and having someone here on the ground, it becomes all of our experience.”

Of course, chasing after erupting volcanoes can be dangerous, especially for amateurs. Officials have strongly warned against approaching the active volcanic area, as lava and rocks continue to emerge from fissures, saying the volcano is unlikely to be deadly unless people visit the areas near the fissures. Hawaii’s Volcano National Park closed on Friday due to the risk of rock and ash fall at the volcano’s summit.

While eager onlookers might not encounter hot lava to the skin, the sulfur dioxide levels in the air near the volcano have grown deadly since Kilauea’s major eruption. As of May 9, sulfur dioxide levels measured above 100 parts per million — high enough that people living near the volcano had to evacuate, according to Elizabeth Tram, a professor of medicine and respiratory health at the University of Hawaii’s John A. Burns School of Medicine.

And while most volcanic eruptions yield strong sulfur smells, Barrios says, the Kilauea volcano has offered some of most extreme amounts of “obnoxious gases” he has ever encountered. “Some were the strongest and most noxious I’ve ever experienced,” he says.

The same goes for the reverberating sounds of rocks and lava exploding out of the volcano. “It makes your heart skip a beat.”

“To be able to completely wrap your five senses around it — as a kid growing up being super passionate about volcanoes, it’s something I’ve dreamt of,” he says.

Barrios says he’s received a great deal of criticism for his up close and personal live streams from the burning volcano. But it doesn’t shake the “lava chaser,” who introduced his 4-year-old son to the thrills of seeing volcanos two years ago. In fact, Barrios says he has a connection with volcanos that runs deeper than government warnings against them. Chasing lava may be dangerous, but he points out that driving a car can also be deadly. You just have to learn how to do it in a safe way.

To stay safe, especially from the toxic gases, Barrios wears a respirator. He also wears a helmet, to protect himself from falling lava, and carries water and snacks in a backpack. “It’s like anything that’s dangerous in life — if you practice it well, you should be there in a safe manner.”

After nearly two decades of experience in tracking lava, he has honed an instinct for knowing when to exit a dangerous situation or press on for a great shot

“I feel really comfortable, but am always able to put myself close enough to where I want to be, but not in a dangerous spot,” he says. “Everyone has a different threshold. I have a higher comfort level than most people.” 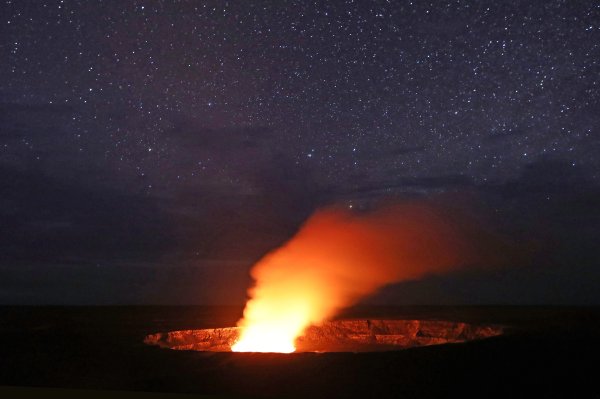 Hawaii's Kilauea Volcano Is Still Erupting. Here's What to Know if You're Traveling to Hawaii
Next Up: Editor's Pick