Looking back on last year’s fire season, experts have ample explanations for why flames became historically destructive in California, consuming thousands of structures throughout the state. Some, like strong Santa Ana winds and a slow recovery from a long drought, are more natural forces. Others, like a growing population that has been pushing development into wild areas, are distinctly human. As one expert told TIME, for many homes in forested places, “it’s just a matter of time” before fire will arrive.

John Davis and Lorrie Brown, who run an architecture firm in Ojai, Calif., knew they were constructing a home in a dangerous spot when they decided to live on 27 acres in the hills of Ventura County, where the Thomas Fire destroyed more than 1,000 structures last year. But unlike many of their neighbors, the couple had a home to go back to after evacuations were over. They had designed it with fire in mind: rather than a typical wooden frame, the home has bones of steel. The decking is made out of a hardwood that burns little better than concrete. Where other homes might have grass, they have gravel, with landscaping setting the home back from ground cover that carries blazes from place to place. There are even fire doors that can be pulled like barn doors to create a “hard shell” protecting the structure from hot embers.

Filmmaker Nicholas Weissman profiled the project with hopes that the many people who may be rebuilding or retrofitting homes in California — particularly in areas that are part of wildland-urban interface — will take note. He lives in the same area and evacuated multiple times as flames came within a quarter mile of his own home. “Know what the place is,” Weissman says. “It’s very much a reality check that we had the worst fire season in California history last year.” And the 2018 fire season will be here soon. 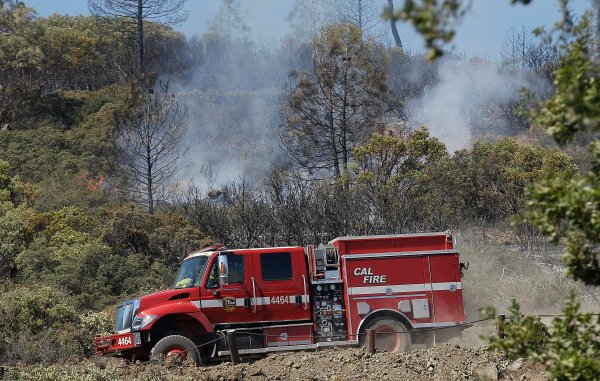