Amy Schumer hosted Saturday Night Live this weekend, starring in a pointed mashup skit of the dystopian Hulu drama The Handmaid’s Tale and HBO’s famous Sex and the City, appropriately called “Handmaids in the City.”

Pretending to be a combination of the two most famous women from each show, Schumer portrays a Carrie Bradshaw-as-Offred character, sitting at a lunch table with the other handmaids in the typical Gilead garb of red robes and off-white bonnets.

The skit’s voiceover opens in standard Sex and the City fashion, saying “Let’s face it, ladies. In 2018, The Handmaid’s Tale is basically our Sex and the City,” a nod to the current state of politics and cultural clashes surrounding women’s issues. “You’ll laugh, you’ll cry, you’ll say, ‘Oh this so could be me and my friends — you know, with the way things are going.”

Schumer imitates Carrie Bradshaw’s well-known inner monologues, thinking: “As I waited for the girls in downtown Gilead, I was feeling like an uptown gal-ead, and I couldn’t help but wonder, are women allowed to do anything anymore?”

Cecily Strong, Aidy Bryant and Kate McKinnon play the other handmaids, with Bryant joining the other women for lunch with the standard handmaid’s greeting, “Under his eye.”

“Under his eye,” Schumer replies, “Under his eye? What about under my eye? Look at these bags,” as all four of the “handmaids in the city” crack up.

“This is what I get for reading a newspaper,” laments McKinnon pointing at her eye as she impersonates Ofwarren, a handmaid whose eye is removed after she is disobedient to her commander.

The skit’s promo jokes that show critics are calling Handmaids in the City “more uplifting than the news.”

SNL‘s musical guest was country singer Kacey Musgraves. You can watch the full skit below: 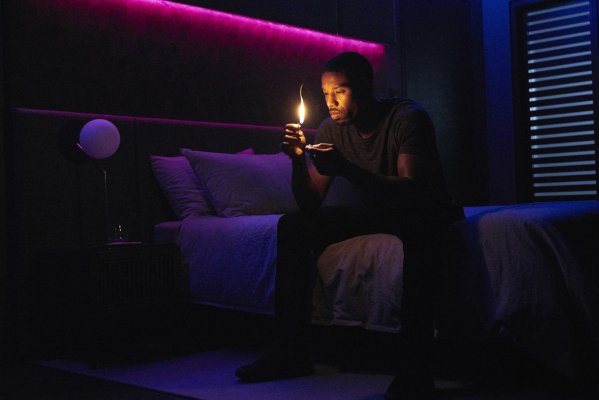 HBO’s Fahrenheit 451 Extinguishes What Made the Book Great
Next Up: Editor's Pick