Protesters in Yerevan on May 2 wave the Armenian flag from a truck displaying a photograph of opposition leader Nikol Pashinyan, who was appointed interim Prime Minister days later
SERGEI GAPON—AFP/Getty Images
By Kate Samuelson

On May 8, pro-democracy protester Nikol Pashinyan was appointed interim Prime Minister of Armenia, the tiny Moscow-friendly former Soviet state bordering Turkey, Georgia, Iran and Azerbaijan. Pashinyan, 42, has been praised for staging a peaceful revolution to topple a long-term leader. Now he must grapple with the reality of governing in Russia’s shadow.

Pashinyan first received attention as a student journalist in the 1990s, railing against corruption and an entrenched elite. He later founded and edited the country’s leading opposition newspaper and was briefly imprisoned in 2009 for his involvement in street protests. Pashinyan went on to found his own party, Civil Contract, which was elected to parliament as part of an opposition coalition in 2017.

In April, Pashinyan led 10 days of peaceful demonstrations across the country against Serzh Sargsyan, who was appointed Prime Minister after spending a decade as President. Protesters said Sargsyan, who has close ties to Russian President Vladimir Putin, had abused the system to cling to power. Armenia’s “velvet revolution” came to a head on the eve of April 24, Genocide Remembrance Day. Sargsyan resigned, admitting, “I was wrong.” Two weeks later, parliament elected Pashinyan Prime Minister.

Although Russia said intervening in the mass protests would be “inappropriate” and praised Sargsyan for resigning, it is unclear whether the Kremlin will warm to the self-styled revolutionary who now leads the country. With a population of just 2.9 million, Armenia depends heavily on Russia for economic support and security, as it is locked in a decades-old conflict with Azerbaijan over disputed territories. But left-leaning Pashinyan may be more inclined to forge links with the E.U., a move that would likely displease Putin. Pro-democracy activists will hope that Armenia’s revolution does not go the bloody way of those in ex–Soviet states like Georgia and Ukraine. 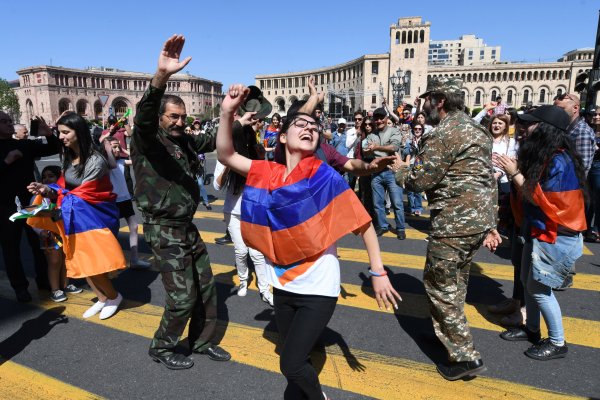 Armenian Protestors Block Key Roads To The Capital
Next Up: Editor's Pick