Gabrielle Union: How We Can Fix Hollywood’s Representation Problem

Union working on the set of Breaking In, out May 11
Hilary Bronwyn Gayle
Ideas
By Gabrielle Union
Union is an author and actor.

When I first started acting, I was always cast as the sassy, asexual black best friend. My peers were shoved into similar, limiting boxes, as there weren’t a lot of opportunities for actors of color. The available roles were oftentimes racist, sexist or woefully underdeveloped. I would read certain scripts and think, You can’t be serious.

But if you dared to speak up, you–not the source of the prejudice–would be the problem. Many writers’ rooms were painfully white and male, and if you called out a racist joke, you would be accused of being overly sensitive. The message was clear: Shut up and thank your lucky stars that you have a job. People of color just weren’t valued.

Films like Black Panther, however, have demonstrated not only that people of color have immense talent, but also that they can be wildly successful at the box office. Still, parts haven’t gotten that much more diverse. The opportunities to see yourself reflected on the big or small screen should not be limited to the pillars of communities or harmful stereotypical tropes. What about the beautiful stories in between?

I want to play average characters with average problems. We should be able to appear in the same nonsensical and mundane stories as white men and women. I want there to be a black Seinfeld, a show about literally nothing. I would love to see more films like Juno or Lady Bird, deliciously nuanced coming-of-age stories that women of color just don’t get to tell. It’s not that we don’t have the material–those books have been written, those articles have been published, and those web series exist. But those projects don’t get funded.

There are few people willing to take a chance on stories written by and that center on people of color. White creatives can fail miserably for years and still be given platform after platform and opportunity after opportunity. Meanwhile, it’s incredibly challenging for us to even get to step one.

That’s why I started the production company I’ll Have Another. I wanted to create a diversity of opportunity–both on- and offscreen. The Time’s Up initiative has sparked conversations about the inequity of opportunities for marginalized groups in every field. When we gain that equity across the board, we’ll see more diverse stories.

But for all of our narratives to be reflected on the screen, we have to fight for all underrepresented groups at once. There has to be intersectionality in any movement. We can’t have separate conversations about racism and sexism. We can’t say, “I’m here to tell women’s stories and stories for women of color.” There shouldn’t be a pecking order–we shouldn’t give white women their due now, and then address everyone else later. The choices we make as creatives are important in the broader fight for equality. Representation–both in front of and behind the camera–matters, and it’s why I work so tirelessly on everything that I take on. For Breaking In, I line-produced, worked with wardrobe, made sure the lodging was sufficient and helped production stay on schedule. It’s important for me to be visible in these roles, and to take more control of the creative process.

L.A.’s Finest, for example, an upcoming TV spin-off of Bad Boys and I’ll Have Another’s first project, has a bigger budget than that of most films I’ve worked on over the past 20 years. It has people of color and women in every position, from the writers’ room to the crew. And for the first time in my career, that wasn’t something I had to fight for.

We are finally realizing that inclusion isn’t just the right thing, it’s lucrative–and time’s truly up. For my part, I’m going to put people to work, and we’re going to tell the stories we’ve long been dying to tell.

Union is an actor, activist and producer 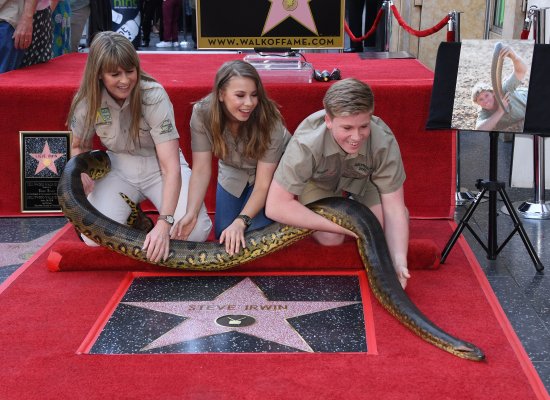 Steve Irwin Remembered With Star on Hollywood Walk of Fame
Next Up: Editor's Pick