At 5:06 p.m. on May 8, Michael Avenatti, the ubiquitous lawyer for adult-film star Stormy Daniels, tweeted a bombshell. Avenatti, whose client is suing President Trump, said he had obtained a list of alleged wire transfers dating from October 2016 to January 2018 into and out of a company controlled by Michael Cohen, Trump’s personal lawyer. Among the alleged inflows to Essential Consultants LLC: half a million dollars from a firm controlled by an aluminum baron close to Russian President Vladimir Putin and hundreds of thousands of dollars from companies with business before the Trump Administration, including telecom giant AT&T and Swiss pharmaceutical behemoth Novartis. Going out, Avenatti claims: the now famous $130,000 mystery-money payment to Daniels, hundreds of thousands of dollars to Cohen’s own bank accounts and millions of dollars in unaccounted for payments to unknown parties.

In the hours following the tweet, several of Cohen’s clients confirmed the payments, and it became clear that a new front had opened up in Trump’s legal and political battlefield. For the past year, Trump had railed against the investigation led by special counsel Robert Mueller as a witch hunt into nonexistent election collusion with Russia. Avenatti’s disclosures, coming just a month after an FBI raid of Cohen’s temporary residence and office, showed that the Justice Department probe has expanded to encompass the business and political activities of Trump’s inner circle during the transition and under his presidency, including payments allegedly made in the President’s personal interest. The broadening investigation is a problem for Trump that firing Mueller can’t solve.

Later that evening, Trump’s lawyers Jay Sekulow and Rudy Giuliani left a message for the President–they didn’t want to take Trump away from monitoring his Secretary of State’s negotiations over the release of three Americans from North Korea, so they said it wasn’t urgent. At around 8:30 p.m., Trump got on the phone. “I don’t know anything about it,” Trump told his lawyers, and after about 15 minutes spent going over the details, Giuliani told TIME, Trump signed off. “It doesn’t involve him,” Giuliani said. “Nobody’s concerned about it.” Giuliani denies that the company was used for payouts on Trump’s behalf. Cohen did not respond to TIME’s requests for comment.

In the perverse pay-to-play world that Washington has become, it’s not clear that any of the Essential Consultants transactions were illegal. It’s common for powerful corporations to hire Washington insiders to influence government decisions: Fortune 500 companies spend hundreds of millions of dollars each year on efforts to revise pending rules or regulations, halt or shape new legislation, and otherwise sway lawmakers to serve their interests. Nor do the documents make clear whether Cohen, who is reportedly under federal investigation for possible bank fraud and violation of election laws, was simply enriching himself without Trump’s knowledge. Cohen reportedly used the company to pay for his own luxury expenses, like a Mercedes-Benz and private club dues. Cohen did not respond to TIME’s requests for comment, but on May 9 his attorney filed court papers challenging portions of Avenatti’s account.

But in the larger sense, the payments to and from the President’s personal lawyer may well be damaging to Trump on a number of fronts. They validate the continuing Justice Department probe and raise a host of questions that any prosecutor in the nation would feel compelled to answer: Was Trump aware of payments made on his behalf? Did he know where the money came from? Did he do anything in return, either in a personal or an official capacity?

Moreover, the revelations underscore Trump’s disregard for presidential ethics, despite his campaign pledge to drain the swamp. They threaten to erode Trump’s grip on supporters who don’t much care about Russia but may have less patience for influence peddling. Democrats certainly hope so. “This investigation has completely metastasized,” says Zac Petkanas, a Democratic strategist who is tracking the investigation. “It has many different heads, and not all of them are Russian heads.”

For a multimillion-dollar company, Essential Consultants has a light footprint. It has no website, no board and no employees. Cohen, the sole owner of the firm, legally established it in mid-October 2016, about a week after the Access Hollywood tape that captured Trump bragging about grabbing women’s genitals upended the presidential race. About 10 days later, Cohen allegedly used the company to make the $130,000 payment to Daniels, through her then lawyer Keith Davidson in an effort to keep her from talking about the affair she says she had with Trump in 2006, shortly before the birth of Trump’s son Barron.

That was just the beginning. Cohen received or disbursed at least $4.4 million between late 2016 and into this year. Some of the largest payments to Essential Consultants came from companies that appeared to have tangible financial interests pending before the U.S. government at the time. In 2017, for example, AT&T stood to gain enormously if the Justice Department approved its proposed merger with Time Warner. Avenatti contends that AT&T began a series of payments to Essential Consultants in October, which totaled $200,000 by January 2018. In a May 8 statement, AT&T said it had hired Cohen “to provide insights into understanding the new Administration.”

Another major payment to Cohen’s company arrived in November 2017 from Korea Aerospace Industries. The aircraft manufacturer is bidding for a multibillion-dollar contract to provide trainer jets for the Air Force, alongside American defense contractor Lockheed Martin. Korea Aerospace paid Essential Consultants $150,000 for what it says was advice on accounting standards on production costs–an area of expertise that appears outside Cohen’s bailiwick.

Swiss pharma giant Novartis also has a particular set of interests in the workings of the new U.S. Administration. In March 2017, a court ordered the company to turn over records related to a long-running federal investigation into alleged kickbacks and bribes paid to U.S. doctors. Former Novartis CEO Joe Jimenez met with Trump in late January 2017. Starting in February that year, the company paid Essential Consultants $100,000 a month for services focused on “U.S. health care policy matters.” After Novartis executives met with Cohen in March, the company “determined that Michael Cohen and Essentials Consultants would be unable to provide the services that Novartis had anticipated,” a spokesman said on May 9. Novartis nevertheless kept up the payments for a full year, until the contract expired.

What, if anything, it received in return is unclear. Last year, the FDA approved Rydapt, a mast cell disorder and leukemia drug, and the Centers for Medicare and Medicaid Services approved limited reimbursements for its rare-blood-cancer drug, Kymriah, which runs $475,000 for a course of a treatment. Incoming chief executive Vasant Narasimhan was also invited to an exclusive sit-down dinner with Trump at the World Economic Forum in Davos in January 2018.

On May 9, the company confirmed that its arrangement with Essential Consultants has attracted the attention of Mueller’s team, which questioned the company over its payments to Cohen. “In hindsight, this must be seen as a mistake,” Novartis spokesman Michael Willi told Reuters.

Perhaps most intriguing, though, are the $500,000 in payments to Essential Consultants from Columbus Nova, a New York investment firm whose biggest client is the Renova Group, which is, in turn, controlled by the Russian oligarch Viktor Vekselberg. Vekselberg and Renova are both under U.S. sanctions imposed in retaliation for Russia’s meddling in the 2016 election. Earlier this year, investigators with special counsel Mueller reportedly questioned Vekselberg about his investments in Columbus Nova’s private equity funds. A lawyer for Columbus Nova wrote in a statement May 8 that the firm’s payment to Essential Consultants had no connection to Vekselberg.

The White House brushes off the Avenatti allegations. “This is yet another irrelevant thing that is made into a big thing,” Giuliani told TIME. Avenatti, for his part, says more is coming. “We’ve only begun to scratch the surface relating to the information we have,” he tells TIME. “We have a whole host of additional information relating to Essential Consultants.”

That’s bad news for Trump. “There’s certainly a corruption angle here,” says former federal prosecutor Renato Mariotti, noting that it is not clear what Cohen was being paid to do. “He doesn’t appear to have any set of skills that can answer [that].”

The disclosures make clear that the Justice Department’s investigations are in fact expanding and accelerating into territory Trump has previously said the lawmen have no business looking at. Experts were quick to place the range of possible legal liabilities from negligible to catastrophic: possible lines of inquiry include bank fraud, campaign-finance or Lobbying Disclosure Act violations, and even bribery. “If the money passed through a shell to Trump,” wrote Harvard law professor Noah Feldman in Bloomberg, “it will look as if Trump’s fixer set up a shell company to accept bribes on the President’s behalf.”

Trump campaigned against Washington corruption, and the work of Cohen’s company may be a particularly stark example of it: money flowing in from foreign interests and big corporations with business before the President, producing undisclosed results on the other side. Which means that when it comes to questionable behavior by Trump and his allies, the President is no longer liable just to the traditional square-jawed work of Justice Department prosecutors, but also to the slash-and-burn tactics he himself rose to power employing.

Avenatti is the first to acknowledge he is turning Trump’s playbook against him. The California lawyer says that back when he was in college at the University of Pennsylvania, he took a class where Trump’s longtime hard-knuckled political adviser Roger Stone made a memorable guest appearance. “You could say that Roger Stone taught me a lot of the skills I’m using today,” Avenatti says wryly. Whether that ends up being more damaging to Trump than the traditional legal investigation remains to be seen, but it’s clear now that the President faces a whole new kind of fight. 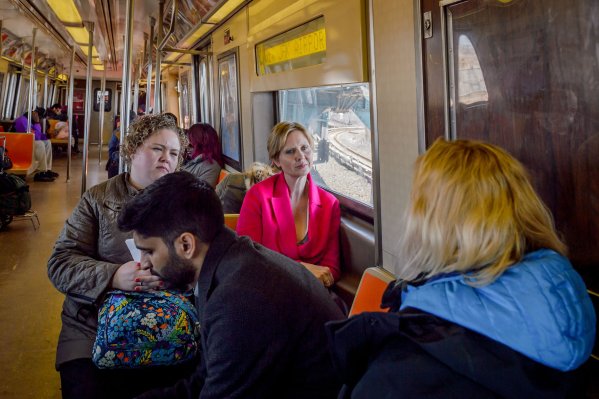 Sex and the City’s Cynthia Nixon Says She's a 'Candidate of This Time.' How the Actor Is Carving Her Role in Politics
Next Up: Editor's Pick