There was a buzz around Malaysia Thursday as the nation came to terms with one of the most dramatic political shifts in its history. Overnight, around 3 a.m., the ruling party that had fiercely retained power for all 61 years after independence fell; an opposition bloc swept the parliamentary elections.

The national polls, once seen as a pro forma exercise rolled out every five years to hand Barisan National (BN) another term, had suddenly, and decisively become an opportunity to catalyze change.

“I’m so happy for my country right now. Never in a million years would I have imagined this would happen,” says Chan, a retiree from outside the capital Kuala Lumpur. “Maybe in KL [Kuala Lumpur] we would win every seat. But to win a majority in parliament? Astounding.”

Independent pollster Merdeka Center had predicted a close race, but said ultimately, Pakatan Harapan, the four-party opposition alliance, would not be able to pull off what no faction has previously done: defeat BN.

Read More: Could Malaysia’s Mahathir Mohamad Become the World’s Oldest Leader? He Speaks to TIME About What Sparked His Political Comeback

“The people have said enough is enough,” Bridget Welsh, an associate professor of political science at John Cabot University tells TIME. “This was a rout of Najib,” she adds.

In his bid to secure a third term, incumbent Prime Minister and BN chairman Najib Razak had sought to weather accusations that he siphoned millions from a state fund. He faced a formidable challenge after his erstwhile mentor and Malaysia’s longest-serving premier, Mahathir Mohamad, came out of retirement and united the fractured opposition. Najib, who has golfed with President Donald Trump and was invited to the White House, referred to Mahathir as a “recycled candidate.”

When he is sworn in by the king, 92-year-old Mahathir will become the world’s oldest head of state.

“This is a new chapter in Malaysia’s history,” says Mohamad Fazly Hussein, 40, a hotelier in Langkawi, where Mahathir won a parliamentary seat.

Fazly, a former member of the ruling party’s youth branch, noted that it was good for Malaysia to experience its first transition of power. “The ruling party has been in power so long they have become rusty,” he says.

While the opposition had counted on a “Malay tsunami” — cutting into the ruling party’s ethnic Malay voting bank — Welsh said the election prompted a broader, Malaysian-wide tsunami.

Najib, Welsh says, was a “liability”; Mahathir a “pull factor” offering continuity in change after having previously governed the country from 1981-2003.

“If the people prefer to be ruled by Tun Mahathir again then that’s the choice we just have to live with,” Nur Sara Mohamad, a BN supporter from a suburb outside of Kuala Lumpur, says, striking up the accepting, if remorseful tone of many ruling party backers on Thursday.

Yet Najib remained defiant in his concession speech. While he promised to accept the will of the people, he cast doubt on Mahathir’s appointment as the next prime minister, insisting it would be the king who decides.

Uncertainty about the transfer of power, when it might happen, and to who, caused an atmosphere of apprehension, says James Chin, director of the Asia Institute Tasmania, University of Tasmania. “Najib is literally fighting for his life,” he says.

Najib could face criminal charges under the new regime, which has promised to set up in an inquest into the $4.5 billion missing from the investment fund he started, 1Malaysia Development Berhad (1MDB). While Najib denies all wrongdoing, at least 10 countries, including the U.S. Justice Department, are investigating.

“If the law says Najib has done something wrong, then he will have to face the consequences,” Mahathir said at press conference on Thursday, insisting he will bring back rule of law to the country.

A vanguard of the establishment, Mahathir helped centralize the powers that Najib exploited.

“The system is O.K., so long as you don’t abuse it,” he told TIME in a recent interview in which he also blasted critics who call him a dictator.

During his campaign, Mahathir apologized for putting Najib in power in the first place, and vowed to return to fix his “biggest mistake.”

Debbie Ambok, a resident of Langkawi, says she stayed up all night to watch the election results trickle in, praying that Mahathir would win.

“As a Malaysian, I’m so proud. I’ve been waiting so many years for this moment. Finally no more GST [goods and services tax], no more corruption, no more burden,” she says, fighting back tears.

There’s much work to be done as Mahathir once again takes up the reins in Putrajaya, the federal administrative capital he engineered from swamp land south of Kuala Lumpur. There’s a new cabinet to appoint, a tax to cancel and a fuel subsidy to launch, among other promises for the first 100 days.

“I’d also expect to see a significant shift in how the nation understands itself and its place in the world,” says Amrita Malhi, a visiting fellow at Australian National University’s Coral Bell School of Asia Pacific Affairs. “Mahathir has talked about the history of colonialism and the importance of sovereignty all the way through his campaign, and with China’s rise and Malaysia’s attempts to work out its response, that discussion will have a way to run.”

But first, there’s a two-day holiday to celebrate, to reflect and to adjust to the landslide changes underfoot.

“Mahathir made Malaysia proud,” says Fazly, “and he’ll do it again.” 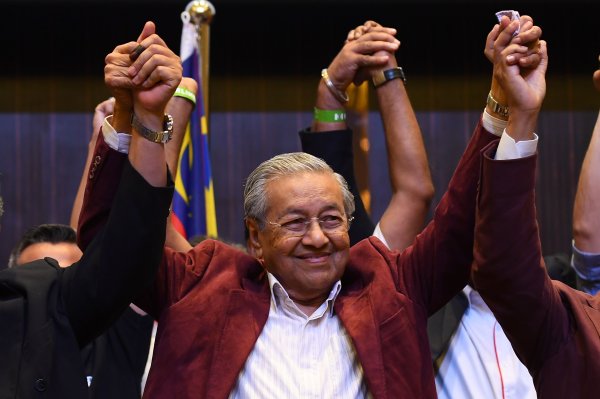 Malaysia’s Mahathir Triumphs in Election Win
Next Up: Editor's Pick