The Ethics of Climbing Everest: Double Amputee Xia Boyu’s Feat Fuels Debates About Who Belongs on the Roof of the World

On Apr. 2, the Chinese climber Xia Boyu stood at the entrance of a Buddhist monastery in Kathmandu, awaiting his turn for a blessing. For the throngs of cross-legged pilgrims thumbing prayer beads on the temple porch, the day was the last day of an annual purification ritual. For the tourists in khakis, the chanting monks and vividly colored silks presented a stunning photo opportunity. And for dozens of Sherpas and their clients, like Xia, who were about to embark on the annual Everest climbing season, it was a chance to pray that they would make it back from the mountain alive.

Xia needed every prayer he could get. Six weeks after the blessing — at 8.26 a.m. local time on May 14 — he finally made it to the top of the world’s highest peak. He was 69, had failed to summit on four previous occasions, and was a double amputee, missing both his lower legs, which were amputated after suffering frostbite in a failed Everest expedition when he was just 25. He also used prosthetic limbs that one expert described as “exactly what does not belong on Everest” because they were modular and liable to freeze up (ever tried to thread a screw at 26,000 feet?).

But his epic triumph has called attention to a small subset of the tight-knit climbing fraternity: disabled climbers. The Nepalese government has been trying to ban disabled climbers from the slopes of Sagarmatha (“Mother Goddess of the Earth”), as Everest is known locally.

Xia is not the first double amputee to conquer Everest — New Zealander Mark Inglis claimed that title in 2006. Santiago Quintero, a climber from Ecuador who is missing parts of both his feet and listed as a double amputee in the Himalayan Database, summited from the Nepal side in 2013. But Xia’s triumph has exacerbated an ethical debate that has been raging for several months: Who belongs on the roof of the world? Many say Xia should not have been allowed to make the attempt in the first place. His critics argue that, in his condition, he posed unacceptable risks not only to himself but to his support team of 12 Sherpas, without which he wouldn’t have stood a chance. (Inglis had to be carried down from the summit on the back of a Sherpa, after developing frostbite.)

Last December, authorities attempted to bar climbers who are disabled, blind, below the age of 16, or intending to climb solo, from undertaking these dangerous expeditions. An outcry ensued, and a group of disabled climbers launched a legal action, citing a violation of the United Nations’ convention on the rights of persons with disabilities, which protects the disabled from discrimination before the law. The nation’s highest court agreed to put the ban under review — a hiatus that Xia took advantage of to make his attempt at the summit that had eluded him so many times in the past.

Trekkers and porters gather at Everest Base Camp on April 25, 2018. Hundreds of climbers cleared to scale Everest were acclimating there, officials said, including a record number of Nepali women climbers.
Prakash Mathema—AFP/Getty Images

Disabled climbers have realized incredible feats. In 2001, Erik Weihenmayer was the first blind climber to summit Everest. In 2016, Jeff Glasbrenner, an American single amputee, summited. But it is hard to argue with the official preoccupation over safety. Never mind legless Chinese men nearing 70: ultimately, none of us belong on the mountain. Everest kills. At 29,029 feet, its jagged ridgeline tears at the troposphere, where climbers must endure subzero temperatures, jet stream winds that roar at the speed of category five hurricanes, and air that contains just a third of the oxygen at sea level. Once human beings enter the infamous Death Zone (above 26,250 feet), coughing caused by the cold air becomes so severe that it can crack the ribs and lung lining. Hypoxia, or lack of oxygen, impairs cognitive function, sometimes with lethal results. Digestion stops, climbers can suffer crippling headaches, and fluid build up in the brain or lungs (cerebral and pulmonary edemas) can become fatal. Rescue, if it is even possible, proceeds slowly and at great risk to the rescuers, who are themselves battling the same horrific conditions.

At the same time, three decades of commercialized mountaineering have created the illusion that anyone, more or less, can touch the sky. Everest has become an antidote to mid-life crises — a quotidian item on the bucket lists of superannuated dentists and CFOs. Every year, hundreds of climbers flock to base camp, many of whom have never put on crampons or set foot above 20,000 feet. Still others climb for the sake of breaking some record.

The Nepalese government has a long history of making hasty regulations in an attempt to reduce the fearsome risks that Everest poses, but none have provoked quite as much emotion as its latest attempted ban.

“You can’t just take certain people’s rights away,” says Hari Budha Magar, a former British Gurkha Rifles soldier, who lost both of his legs above-the-knee in an IED attack serving in Afghanistan. Magar helped spearhead the legal action, and wants to be the first above-the-knee double amputee to scale Everest.

Renaud Meyer, of the United Nations Development Program Nepal, agrees. “It is a human rights issue. Everyone is entitled to travel and exploration,” he says. “We shouldn’t look at it from a disability or a non disability.”

Not so in eyes of the Nepalese authorities.

“We need to protect the right of people to live,” Dinesh Bhattari, the director-general of Nepal’s department of tourism, tells TIME. “If a person is unable to see, he needs to rely completely on a [Sherpa]. If anything happens, that will jeopardize the lives of both.”

The government is not alone in its frustration. In 2013, Rishi Bhandari, managing director of Satori Adventures, helped the armless Sudarshan Gautam reach the summit. The Nepalese-Canadian succeeded, only to require rescue while descending at 23,000 feet, where he fell ill to exhaustion. Gautam had to be extracted via longline in the highest altitude helicopter evacuation ever — an operation fraught with danger, because the thinner air affects the ability of the chopper’s rotors to provide lift. Since that emergency, Bhandari says taking climbers with major disabilities is not worth the risk.

Xia Boyu crosses a ladder in the Khumbu Icefall in May.
Courtesy Xia Boyu

Although he grew up at the northeastern ridge of the Tibetan plateau, in China’s Qinghai province, Xia knew nothing about mountaineering until 1974, when, at the age of 25, he got wind of a recruitment drive for the Chinese Mountaineering Team. They were conducting free physical examinations, which appealed to a young Xia, who dreamed of entering professional soccer. He never actually expected to be selected, but he was.

“Everest was my first mountain,” he tells TIME.

For Xia though, the climb went terribly wrong. He was part of a 20-man detachment whose mission was two-fold: establish the highest camp and then summit. The team made it to 28,215 feet — just over 800 feet away from the summit — when a storm forced them to bivouac. One of the men had lost his sleeping bag. Xia, whose remarkable ability to tolerate cold had earned him the nickname ‘the Fire God,’ selflessly decided to lend his sleeping bag to his teammate.

They were stranded for two days and three nights in the death zone and aborted their summit attempt. When they eventually managed to return to camp at just over 22,300 feet, Xia was found to have severe frostbite. He was evacuated to Beijing, where his lower legs were amputated.

Xia is as tough as a man could possibly be. He has won awards in China’s National Games for the Disabled in a range of events from shot put to wheelchair basketball. He survived cancer in 1996. In 2011, he won two golds at the Paraclimbing World Championships in Italy. He’s also hiked crossed the Tengger Desert and the Gobi Desert, and scaled several peaks ranging as high as 26,246 feet.

Neither were his previous Everest failures due to his lack of ability. During Xia’s second expedition to Everest in 2014, climbing season was cancelled after an avalanche ripped down the western shoulder and killed 16 Sherpas. In 2015, a 7.8 earthquake devastated Nepal, triggering avalanches that killed 18 people on the mountain and destroyed Base Camp. On Xia’s fourth attempt in 2016, he got to 300 feet from the summit — but a sudden blizzard forced him to retreat.

Xia’s persistence and ultimate success has given ammunition to opponents of a blanket ban on disabled climbers. “Everyone has their own climbing ability and your disability may or may not play into that,” says Garrett Madison, founder of Madison Mountaineering, who successfully led Glasbrennerthe American single amputee, to the summit in 2016 without any issues. If anything, Glasbrenner “performs at a higher level because of his commitment to training and preparation,” says Madison. “It’s just a very gray area.”

‘The real problem is inexperience’

Rather than target potentially capable climbers like Glasbrenner or Xia, many in the climbing community say more effort could be made to regulate expedition companies who create the illusion that Everest is within anyone’s reach. There are no qualifications required to attempt an Everest climb, and Nepal’s lucrative climbing industry is self-policed. That spells trouble if the local industry decides to prioritize revenue over safety — a temptation, in a country where a quarter of the population lives below the poverty line.

“The real problem is inexperience,” says Russell Brice, founder of Himalayan Experience and a renowned expedition leader. “This is the problem of the operators who encourage and accept these members.”

Some operators offer bargain expeditions — as low as $20,000 compared to the median price of $41,500 — flooding the mountain with travelers who want the bragging rights of having been up Everest, but who are unprepared for the dangers. One notorious low budget operator, Seven Summit Treks, has also started targeting the high end of the market. It offers a VVIP Mount Everest Expedition, open to anyone who wants “to experience what it feels like to be on the highest point on the planet,” and who has a “strong economic background to compensate for your old age, weak physical condition or your fear of risks.” The price? A cool $130,000.

Xia Boyu waves as he sits on an ambulance upon his arrival, after successfully climbing Mount Everest, in Kathmandu, Nepal, on May 16, 2018.
Navesh Chitrakar—Reuters

“Everest is not only for people with experience. Everest is all ours. Everybody can go there,” says Mingma Sherpa, chairman of Seven Summit Treks, tells TIME. The company will lead about 100 climbers on Everest attempts this season and he maintains that inexperience is no barrier. “If I pay $100,000, who is stopping me? No one can. It’s my choice. If go there, and my commission is good, I can climb. If not good, I will die.”

Xia’s triumph now means that the conflict has only become harder to resolve. Shortly after Xia made the summit, his son sent out a jubilant post on the Chinese social media platform WeChat. “My Dad … has realized his 40 years dream!!!” it read. The hope must be that the dreams of other disabled climbers don’t turn into disaster. 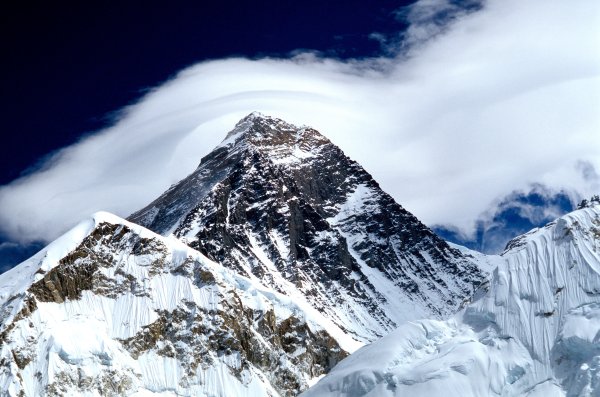