President Donald Trump has fulfilled his promise to withdraw the U.S. from the Iran nuclear deal. For a man about to stare down Kim Jong Un over a near-identical issue, it’s a gutsy move. The rest of the signatories (Germany, France, the U.K., Russia, China) have vowed to uphold the terms of the agreement. Iran has signaled a desire to do the same. We now live in an “America First,” post–Pax Americana world — one in which the U.S. doesn’t play a lead role, but a participatory one. It’s a world, in other words, in which an Iran deal, even if it’s not this Iran deal, might survive without the U.S. aboard. At least, that’s what supporters in Iran and Europe have to hope.

There are plenty of reasons why the U.S. would be better off remaining part of the Joint Comprehensive Plan of Action (JCPOA), even if it does have some glaring flaws (like its failure to rein in Iran’s ballistic missile program and to outline what happens after the terms of the deal begin expiring in 2025). Withdrawing Washington from the agreement further isolates the U.S at a particularly precarious moment in global politics. China and Russia have spent years attempting to convince countries that they are stable and preferable alternatives to the U.S.; Trump made a compelling case for them in a single press conference.

Another issue: If Iran decides the deal is indeed dead, it will kick out International Atomic Energy Agency inspectors and begin enriching uranium. If you’re worried that Iran is determined to get a nuclear weapon, it’s better to have the inspectors inside the country. Trump’s Iran decision also drives the wedge between the U.S. and Europe still deeper. Following his announcement, the U.K., France and Germany issued a joint statement that expressed regret and concern in response to Trump’s decision: “Together, we emphasize our continuing commitment to the JCPOA. This agreement remains important for our shared security.” Europe is already incensed that Trump has offered only temporary exemptions on the steel and aluminum tariffs it threatens to impose on the E.U.

French President Emmanuel Macron is trying to keep the deal alive. “We will work collectively on a broader framework, covering nuclear activity, the post-2025 period, ballistic activity, and stability in the Middle-East, notably Syria, Yemen, and Iraq,” he tweeted in response to Trump’s announcement. But it’s hard to see how he can persuade Trump that Iran will no longer be “the leading state sponsor of terror,” as Trump said today.

Trump’s decision to nix the Iran deal will also hurt U.S. consumers. The price of oil has already reached a three-year high on speculation Trump was preparing to abandon the nuclear deal. As U.S. sanctions come back into force, Iran’s oil production will take a hit, as will the world’s supply of the critical commodity. If a spike in oil prices pushes gasoline prices higher, there will be political repercussions for Trump and his allies — just in time for the summer driving season and then the midterm elections.

During his run for the White House, candidate Trump vowed to withdraw the U.S. from this agreement. As president, he has warned repeatedly that he considers having “no deal” better than having “this deal.” We’re all about to find out whether he’s right. 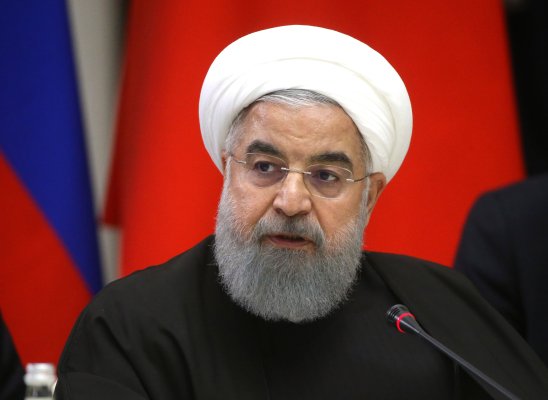 Rouhani Warns U.S. of 'Historic Regret'
Next Up: Editor's Pick