Ever since President Donald Trump tapped Gina Haspel as his choice to lead the CIA nearly two months ago, a fierce debate has engulfed Washington over her suitability to run the agency. Haspel, a 33-year intelligence operative who would become the first woman to lead the CIA, remains embroiled in controversy because of her role in the agency’s controversial interrogation and detention programs in the wake of the Sept. 11, 2001 attacks.

The topic is expected to be of intense interest Wednesday when she appears before the Senate Intelligence Committee in a much anticipated confirmation hearing. Nearly all of her career remains shrouded in secrecy to the public, a fact that has drawn fire from Democrats.

What is known is that Haspel ran a secret “black site” in Thailand where two al-Qaeda suspects were subject to an array of harsh techniques, including simulated drowning, which have been widely labeled as “torture” by critics, in an effort to glean intelligence on terror plots.

The CIA refuses to say whether Haspel had direct involvement in the use of those techniques, or what her role was in drawing up orders to destroy videotapes that documented the employment of the techniques. For the past two days, Haspel engaged in closed-door discussions on Capitol Hill telling lawmakers that she will not reinstitute the detention and interrogation programs, according to U.S. officials familiar with the discussions.

Nonetheless, retired military leaders, anti-torture organizations, faith leaders, and other groups have continued to pressure Senators to reject her nomination. Haspel, who has been acting director at the agency since Mike Pompeo was selected to become Secretary of State, reportedly considered withdrawing in order to avoid tarnishing the CIA.

Meanwhile, the president has repeatedly used his Twitter account to praise Haspel. As a candidate, Trump advocated simulated drowning, more commonly known as waterboarding and other harsh techniques on terror suspects.

The CIA has engaged in an unprecedented public relations campaign supporting her appointment by selectively releasing general information about her career as an officer, details about her personal interests and other material that’s beneficial to her nomination. For instance, the agency declassified a 2011 memo by then-CIA Deputy Director Michael Morell that found “no fault” with Haspel’s actions regarding the destruction of the tapes and concluded that she acted “appropriately.”

The public relations campaign has rankled some of the CIA’s former rank and file, saying that advocating on her behalf casts the agency in a bad light since it has offered little insight into areas of her career that have raised concern.

Glenn Carle, a retired CIA officer and author of “The Interrogator,” a memoir describing his involvement in the interrogation of a black site detainee, said it was a “shock and disturbing for our democracy” that the agency was wading into pushing for its own boss.

“Gina’s merits or demerits in the torture issue are important, but actually secondary to the larger issue that the agency’s advocacy on her behalf raise,” Carle said. “That the agency has taken on a public advocacy role on a political issue is another chip in the foundations of our democracy. And most people will not notice the slow, subtle harm this action causes.”

Cindy Otis, a former CIA analyst primarily specializing in Europe and the Middle East, said she is glad the agency has released some information about Haspel, but warned against going too far.

“The agency has to be careful to make sure it maintains objectivity in conversations that matter,” she said. “What we have seen with Gina has gone a little bit further than that.”

Nada Bakos, a former CIA analyst and targeting officer, said it’s tricky to inform the public about Haspel’s three-decade long career because nearly all of it was spent undercover. “There’s nothing wrong with them trying to get that information out there,” she said. “But at the same time: Can they speak for everyone inside the agency in advocating for her appointment? Probably not.”

The CIA has used media distribution lists to send out glowing quotes from politicians and national security experts about Haspel. The agency also released a brief biography on their website and Twitter, which stated she was a globe-trotting officer whose career was like something “right out of a spy novel.” The abridged version is: Haspel served in dangerous places, learned foreign languages and faced down the communist threat during the Cold War.

The CIA said Haspel later “requested a transfer to CIA’s Counter Terrorism Center. Her first day on the job was September 11, 2001. She walked in amid the commotion, sat down at a computer, and got to work. She didn’t let up for three years, often working seven days a week.” The agency did not publish information pertaining to the Thailand black site.

When the attacks happened, the CIA had little experience in detention and interrogation, and initially the agency’s efforts were a disaster. The worst abuses took place at a hastily established, dungeon-like site in Afghanistan called the Salt Pit after the U.S. invaded in 2001. One detainee died overnight in a near freezing cell; others were beaten, hung by their arms and forgotten about. Still others suffered hallucinations and paranoia that drove them to self-harm and attempts at suicide.

In 2002 the CIA formalized its detention and interrogation program with the blessing of George W. Bush’s White House and Justice Department. Convinced more attacks were imminent, the agency hired two former Air Force psychologists, James Mitchell and Bruce Jessen, who like Beale had worked in the SERE program. The CIA program was run at black sites abroad. Initially paid by the day, Mitchell and Jessen eventually formed a private company that was paid $81 million by the CIA for managing most of the detention and interrogation of the agency’s 119 detainees. A tranche of heavily redacted documents related to the controversial interrogation program was publicly released in December 2014.

Before Haspel’s arrival in Thailand, Abu Zubaydah was waterboarded 83 times during a three-week period in August 2002. According to his lawyer, he was “suspended from hooks in the ceiling, forced into a coffin for hours at a time in a gathering pool of his own urine and feces, crammed into a tiny box that would’ve been small even for a child, bombarded with screaming noise and cold air, compelled to stay awake for days on end, and ‘rectally rehydrated.’” Another man Abd al-Rahim al-Nashiri was waterboarded three times while Haspel was at the site.

“Given that Ms. Haspel, as the current Acting Director of the CIA, is in the conflicted position of serving as the classification authority over potentially derogatory information related to her own nomination, we can think of no more appropriate situation for you to serve as the relevant authority,” the letter says.

On Monday, the CIA delivered two boxes of classified documents marked “HAND CARRY” to the Senate related to Haspel’s career. It now sits in a secure reading room to help Senators formulate their questions ahead of Wednesday’s hearing. 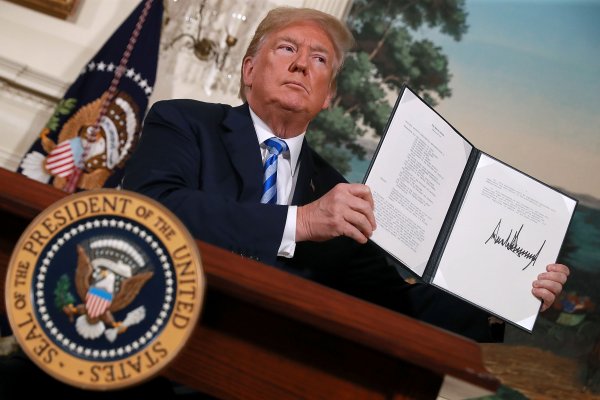 Trump Scrapped Iran Deal Because of Korea
Next Up: Editor's Pick