How Donald Trump Could Make History by Pleading the Fifth

If he pleads the Fifth Amendment to avoid answering a question from Special Counsel Robert Mueller, Donald Trump would make history.

Experts say that no previous president has ever used the constitutional right to avoid self-incrimination while in office, a possibility raised by Trump lawyer Rudy Giuliani in TV interviews this week.

While Trump has the same rights as any other citizen to avoid incriminating himself in a legal probe, the move could still hurt him.

“The benefits are all legal, but I think the detriments are political,” says Saikrishna Prakash, professor at University of Virginia Law School and Senior Fellow at UVA’s Miller Center, which has a partnership with TIME. “If he pleads it, there will be many people who say that he’s hiding some kind of crime. Of course, the court can’t infer guilt from this, but we’re free to draw whatever inferences we want as members of the public.”

Trump attorneys have said they fear Mueller’s investigation into Russian meddling in the 2016 election could amount to a “perjury trap” in which the president might make an untruthful statement. That pitfall has already claimed two former Trump aides — former National Security Advisor Michael Flynn and former campaign advisor George Papadopoulos — who pleaded guilty to making false statements to federal agents.

Giuliani even likened it to lifestyle guru Martha Stewart, who got in trouble during an investigation into suspicious stock trades.

“I’m going to walk him into a prosecution for perjury like Martha Stewart?” he said.

Former President Bill Clinton might have been served better by taking the Fifth too, since his inaccurate answers to a grand jury about a relationship with White House intern Monica Lewinsky led to impeachment charges in the House.

But to many Americans, taking the Fifth is tantamount to confessing, even though legal experts caution against this interpretation. Trump himself even pushed this view when he was running for president in 2016, referring to Hillary Clinton aides who refused to answer questions about a private email server.

“The mob takes the Fifth,” he said at an Iowa rally. “If you’re innocent, why are you taking the Fifth Amendment?”

Still, over the past three years, Trump has largely proven himself immune from conventional laws of politics. Incidents that likely would have sunk other politicians, such as the release not long before the 2016 presidential election of the “Access Hollywood” tape in which Trump brags about grabbing women’s genitals, didn’t bring him down. So it’s hard to predict how invoking the Fifth Amendment would affect Trump.

“The political fallout might be considerable or it might not, given that pretty much everyone in the country seems to have made up his or her mind one way or the other,” says Jon Michaels, professor at UCLA School of Law.

The unusual politics of the Trump-era, coupled with the President’s reported resistance to legal coaching, mean that pleading the Fifth might not be a bad move for Trump. “Is the political fallout from invoking the Fifth higher than the risk of him perjuring himself, divulging stuff [or] losing his cool, all these things that any seasoned prosecutor would seize upon?” asks Michaels. “This might be the best instance in our political history where the President should invoke the Fifth.”

It’s not yet certain that Trump and his legal team will do this. In the past, Trump has said he would “love” to talk to Mueller and is “looking forward” to an interview. And for now, there’s reason to believe both sides might simply be taking pages out of Trump’s negotiating playbook.

“The Administration’s lawyers want to make it seem like they’re not going to cooperate with Mueller, and Mueller wants to make it seem like he’s going to ask a bunch of questions,” says Prakash. “They both want to stake out extreme positions … I think the idea is they perhaps will meet in the middle somewhere.” 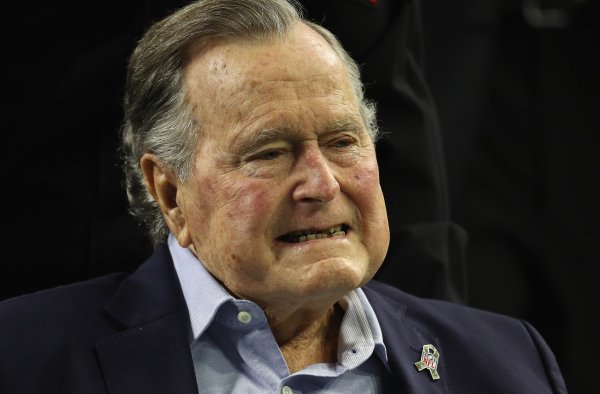 George H.W. Bush Has Been Released From the Hospital and 'Is Doing Well'
Next Up: Editor's Pick