As Secretary of State Mike Pompeo arrives in Pyongyang to lay the foundation for a historic summit between President Donald Trump and North Korean leader Kim Jong Un, South Korean officials are hopeful that the two leaders can secure a deal in the weeks ahead that would lead to complete denuclearization of the peninsula in exchange for regime security.

“The details have to be worked out at the negotiating table, but generally it will be a comprehensive package of denuclearization in return for regime security and, if we go further, the well-being of the regime,” South Korea’s Deputy Minister of Foreign Affairs and Ambassador for Public Diplomacy Enna Park told TIME in an exclusive interview in Hong Kong Tuesday.

Park, who took part in previous negotiations between former Korean leaders Kim Jong Il and Kim Dae Jung in 2000, said conditions are ripe for progress, and that the U.S. and its ally South Korea must offer “a deal Mr. Kim cannot refuse.”

“We have high expectations that they may produce very applicable outcomes, setting a road map toward denuclearization,” Park said, adding that Seoul would be playing the role of “navigator, to steer the success of the U.S.-North Korea summit.”

Trump said Friday that a date and place have been set for the summit but details have not been announced. Reports say the rendezvous could be set in Singapore and that it is likely to take place in June. The historic meeting comes on the heels of a landmark Inter-Korean leaders summit, the first such meeting in 11 years, that saw Kim become the first North Korean leader ever to set foot inside the South.

South Korean President Moon Jae In and counterpart Kim announced after the summit that they agreed to pursue a treaty that would bring a long-awaited close to the Korean War, which began in 1950 and ended in armistice three bloody years later. They also agreed, for the first time in their countries’ shared history, to the common goal of complete denuclearization. Park described the moment as “very emotional,” telling TIME that it was “a declaration of the opening of a new era of peace.”

Enna Park, South Korea’s deputy minister for foreign affairs, is pictured during her interview with TIME in Hong Kong on May 8, 2018. Park's four-day visit came on the invitation of the Asia Society Hong Kong Center.
Liam Fitzpatrick—TIME

‘We Have a Real, Unique Opportunity in Front of Us’

When Trump meets Kim, the scene will be less sentimental. Trump entered office on a gale of bellicose rhetoric, suggesting early on that a “military option” such as a preemptive strike wouldn’t be ruled out to counter the threat of Pyongyang’s escalating nuclear and ballistic missile tests. His administration quickly shifted from his predecessor’s policy of “strategic patience” to one of “maximum pressure and engagement,” piling on new sanctions targeting the country’s trade and financial partners while leaning on its neighbors to enforce U.N. resolutions.

South Korea, which would bear the costs either of another war or of propping up its neighbor as it hobbles out of isolation and poverty, is counting on the U.S. to be both decisive and reasonable. Kim wants the growth that could be offered by the South — the two sides have drawn plans for a “new economic map” merging them into a single market — but the sanctions regime must be lifted before blueprints can be implemented. Such a seismic shift depends directly on America’s successful negotiation of genuine denuclearization.

“South Korea cannot give North Korea what it wants: regime security,” Park said. “Without the U.S. we cannot proceed with the denuclearization process. The U.S. is the key player.”

Park said she had confidence in the Trump administration, and characterized the U.S.-Korean alliance as being at its “strongest ever.”

This moment, she said, required the kind of “top-down leadership” Trump and Kim are expected to demonstrate, and she described the president as “actually quite open to hearing the views and suggestions of South Korea on many issues.”

Even if Trump and his envoys say the right words and secure a deal, many will have reservations about its sincerity.

“I can’t imagine the [North Korean] leadership ever believing promises of ‘regime security’ or ‘legal immunity’ in any form, to be credible,” Daniel Pinkston, an East Asia expert at Troy University in South Korea, tells TIME in an email. But, he adds, “Trump seems to have no problem saying anything and lying everyday. So I suppose it’s possible for him to say or promise anything.”

Park acknowledged that past attempts failed to bring peace or disarmament, but she says that right now, “we have a real, unique opportunity in front of us.” In her view, the door is open for engagement so long as Pyongyang can verifiably change its course.

“If we let the past bind us, we won’t make any progress. We have to try, we have to trust, and we have to verify,” said Park. “That’s what we have to do — doing nothing is a very bad option.” 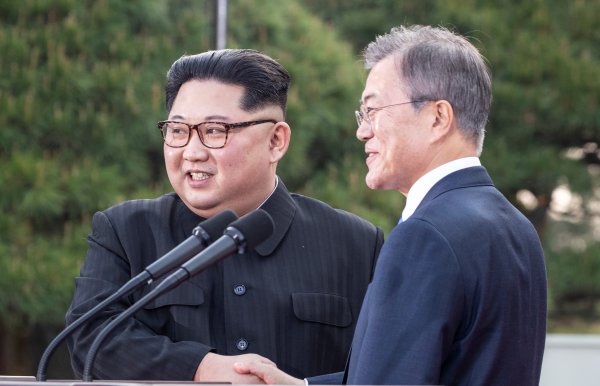