Even in her absence, the internet felt Beyoncé’s presence at the 2018 Met Gala.

You couldn’t take a step on the 2018 Met Gala red carpet without rubbing shoulders with a major player on Monday at the Metropolitan Museum of Art in New York City. There was Rihanna dressed in her bedazzled Pope topper, and here was Jared Leto channeling the coming of Christ.

Exciting though they were, Beyoncé’s highly anticipated arrival never happened, and she was sorely missed. But leave it to the internet to praise the “appearance” of her “holy ghost” anyway. After all, the 2018 Met Gala theme was Heavenly Bodies: Fashion and the Catholic Imagination so it makes sense.

Fans shared images of absolutely no one on the carpet to recognize that if she wasn’t there in body, she most certainly had arrived in spirit. Some even proclaimed she was the best dressed.

Beyoncé skipped the 2017 Met Gala as well after announcing she was pregnant with her twins. She kicks off her “On the Run” world stadium tour with her husband Jay-Z on June 5, Cardiff, U.K.

See a selection of the Beyoncé Met Gala ghost memes below. 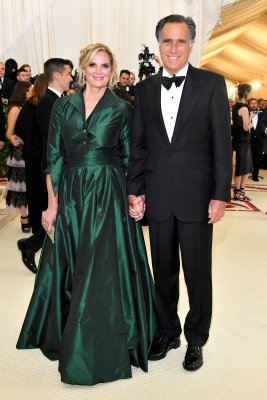 People Are Surprised That Mitt Romney Rolled Up to the 2018 Met Gala
Next Up: Editor's Pick