A woman reads a copy of the English-language Phnom Penh Post at a news stand in Phnom Penh, Cambodia on August 8, 2008. One of Cambodia's leading newspapers, the Post was bought by Malaysian businessman Sivakumar Ganapathy this past week, raising concerns for its editorial freedom.
Tang Chhin Sothy—AFP/Getty Images
By Eli Meixler / Phnom Penh

I still remember my first day on the job as an intern on the photo desk at the Phnom Penh Post.

“Want to go to a land protest?” asked my editor.

I was 23 years old, and I had barely managed to leave an imprint on a newsroom chair, at the Post or elsewhere. I grabbed my camera and hopped on the back of a motorbike to Boeung Kak, a 220-acre lake in the center of the capital city that had been drained to make way for commercial developments. Authorities were trying to build a military police station in the middle of a lakeside village, and local residents feared losing the very land their houses stood on. I remember feeling stunned to be reporting on conflict between a people and their government over an issue as basic as having a place to live.

For 26 years, the Phnom Penh Post has operated at the center of conflicts like these. But the future of Cambodia’s last truly independent paper is in peril.

Upon announcement of the paper’s sale Saturday to Malaysian businessman Sivakumar S. Ganapathy, the new owner said in a press statement that he was committed to the paper’s “26 year old legacy and editorial principles/independence.” But it didn’t take long for him to end up at loggerheads with its editors; the fallout was almost immediate after the Post reported that Ganapathy’s public relations firm, Asia PR, had links to the increasingly authoritarian government of Cambodian Prime Minister Hun Sen. The firm’s official website, now cited in news reports across the globe, lists “Cambodia and Hun Sen’s entry into the Government seat” among its government-related projects. Ganapathy demanded the story be removed from the Post’s website. Editors stood firm.

Phnom Penh Post Editor-in-Chief Kay Kimsong (left) and chief of staff Chhay Channyda, after Kimsong was fired on May 7, 2018.
Stringer—Reuters

In a statement announcing the termination of the editor-in-chief and two reporters, Ganapathy condemned the report as “a disgrace and an insult” that “borders on internal sabotage.” His criticisms included the authors’ omission of his middle initial, S., and the misidentification of his role at Asia PR as “an executive,” rather than “CEO and managing director.” A counter-statement signed by 23 members of the Post‘s current and former staff defended the report as “an attempt to maintain the transparency and integrity of our paper as we have done for more than 25 years.”

On Monday morning, the Post‘s newsroom was “ashen faced,” one staffer said. Editor-in-chief Kay Kimsong was fired, six other editors and reporters resigned in protest, as did the CEO. “At some point, we just agreed to disagree about the definition of editorial independence,” Brendan O’Byrne, the Post‘s former business editor and co-author of the report, told TIME after his resignation. Shaken by their editor’s dismissal, what remained of the staff crowded into the Post’s conference room Monday demanding explanations, but with families to support and an already gutted media landscape, few can afford to risk their jobs out of principle. Nonetheless, eight more reporters gave their notice Tuesday, leaving the Post‘s news desk completely stripped of foreign staff and its Khmer journalists facing an uncertain future. “What happened made us very afraid that we may not be able to continue our journalistic work,” Yon Sineat, a Post reporter who covers labor, told TIME. “We don’t know what will happen next.”

Ganapathy has not replied to multiple requests for a comment.

‘This is a purge’

Cambodia once enjoyed an extraordinarily free press by regional standards, but its domestic media has suffered a series of recent blows. Journalists and human rights groups have accused Hun Sen’s government of targeting critics and putting intense pressure on the media in the lead-up to nationwide elections in July, warning that accountability and access to information are critically at stake. “Make no mistake, effectively decapitating the Post’s independent minded newsroom is the entire point of this hostile takeover,” Phil Robertson, Deputy Director for Human Rights Watch’s Asia Division, told TIME. “This is a purge and among the victims is what little remains of press freedom in Cambodia.”

The Cambodia Daily, the Post‘s chief competitor, was shuttered last September after failing to pay a $6.3 million tax bill that the paper’s editors claimed was politically motivated. (The Post also faced a $3.9 million tax bill, which was reportedly settled by the sale.) Dozens of independent radio stations have been shut down. Last year, Cambodia dropped 10 places in an annual World Press Freedom Index by Reporters Sans Frontières, amid what the group called a “climate of terror that has drastically curtailed press freedom.”

Read more: What It Was Like to Work at the Crusading Cambodia Daily

An English-language daily edition of the Post was eventually launched in 2008, and a Khmer-language edition followed by a year. The Post — as well as the Daily — became known as an incubator for generations of journalists. Many who got their start at the paper went on to staff newsrooms around the world, others became national correspondents for leading news wires. The Post also earned a reputation for fearless coverage of issues like corruption, deforestation and political malfeasance. To date, it has been honored with more than 20 international awards.

But Hun Sen’s crackdown has reached far beyond the country’s newsrooms and production studios. As elections near, human rights advocates and political opposition figures have been harassed, imprisoned and driven into exile. The Cambodia National Rescue Party, the only credible challenger to Hun Sen’s government, was legally dissolved last year. The party’s former president, Khem Sokha, is in prison, while two of its prominent leaders, Mu Sochua and Sam Rainsy, are in exile along with scores of their pro-democratic colleagues.

The now jobless Kimsong, the Post’s former editor-in-chief, said he believes “it’s necessary to have press freedom” at this critical juncture in the democratic process. “We’re not sure about the future of the Post, but I believe that our colleagues there will continue their spirit of 21st Century journalism, and the new boss may understand that in this country it is necessary to have accurate information,” he told TIME. “People need the truth.” 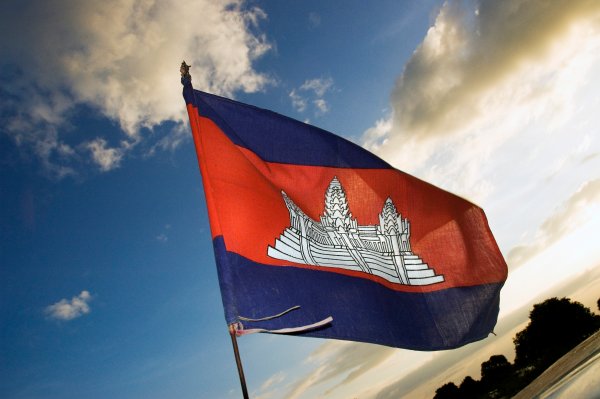