The Nazi Shadow Behind the World's Youngest Billionaires

Their grandfather was said to be Nazi Germany’s richest man after building a weapons empire on the backs of slave labor.

Their father was involved in one of postwar Germany’s biggest political scandals. He almost frittered away the family fortune.

Enough remained for Viktoria-Katharina Flick and twin brother Karl-Friedrich Flick to lay claim, at 19, to being the world’s youngest billionaires. Each has $1.8 billion, according to the Bloomberg Billionaires Index.

Behind the riches, discreetly managed by their family office in Austria, lies a dark history of one of Germany’s wealthiest industrial dynasties.

The Flicks’ wealth traces its roots to Friedrich Flick, who spent three years in prison after he was convicted by the Nuremberg war crimes tribunal of using slave labor to produce armaments for the Nazis, among other crimes. He created a steel empire, which expanded by seizing companies in Nazi-occupied territories and in Germany through Aryanizations—the expropriation and forced sale of Jewish-owned businesses. As many as 40,000 laborers may have died working for Flick companies, according to a study of his Nazi-era businesses published in 2008.

Flick was released from prison in 1950, after the U.S. high commissioner for Germany granted controversial pardons to German industrialists. The U.S. and U.K. returned his money and business properties, including one Aryanized asset. He sold his coal businesses and invested the proceeds in numerous companies, including Daimler-Benz AG, eventually becoming the carmaker’s biggest shareholder.

“Leaving aside all moral standards, Friedrich Flick had the genius ability to become the richest person in Germany—twice,” said Thomas Ramge, author of “The Flicks,” a family history.

Other German business dynasties whose fortunes partly stem from the Nazi era, such as the Quandts and the Oetkers—and even some Flick family members—have made some form of restitution for using slave labor. Friedrich Flick and his youngest son, who became sole owner of the conglomerate, never did.

Friedrich Flick maintained his innocence and said that he had neither a legal nor a moral obligation to pay restitution. The son “just didn’t have the intellectual ambition to deal with the complexity of German history and how his family was involved,” Ramge said.

That son, Friedrich Karl Flick, took the reins of the family business upon his father’s death in 1972. He became sole owner of what was then Germany’s largest closely held conglomerate after buying out three family members in 1975. He also sold the remaining Aryanized asset, the Luebeck blast furnaces in northern Germany, to U.S. Steel Corp. that year.

In the 1980s, he was mired in a scandal involving illegal political donations that led to the resignations of Germany’s minister of economics and the parliamentary president. Friedrich Karl Flick denied knowledge of the payments and was not indicted. In 1987, his closest associate was fined for tax evasion and given a suspended jail sentence.

Friedrich Karl Flick sold the businesses to Deutsche Bank AG for 5.36 billion deutsche marks ($2.17 billion) in 1985, at the height of the scandal. After that, he withdrew from public life.

Almost a decade later, Flick moved to Austria, home of his third wife, Ingrid Ragger, 32 years his junior. They met while she was working as a hotel receptionist in a ski resort. He died in 2006, when Viktoria-Katharina and Karl-Friedrich, her younger brother by a minute, were 7 years old.

He “retreated to a safe mix of stocks, bonds, real estate and whatnot,” Ramge said in an interview. “Although there was still plenty to leave to the twins and his two other daughters.” When Flick died, he left behind $1 billion for each child, according to the Bloomberg Billionaires Index.

Today the twins’ fortune is overseen by the Flick Privatstiftung, a Vienna- and Velden am Woerthersee, Austria-based family office. Stefan Weiser, a board member, declined to comment on Bloomberg’s tally of the family wealth.

“As we are a single-family office we do not divulge any details to outsiders,” Weiser said in an email. The twins were not made available for interviews. Their two half-sisters, Alexandra Butz, 50, and Elisabeth von Auersperg-Breunner, 44, from Friedrich Karl Flick’s second marriage, are based in Munich and Austria. The sisters’ net worth is also $1.8 billion each. They declined to comment.

The twins’ lives have remained intensely private; no photographs of them have gone public. Karl-Friedrich won a regional junior sabre-fencing title in 2017. Little is known about his sister.

Their mother has said she tried to make their childhoods as normal as possible.

“They’ve been getting pocket money since second grade, age-appropriate, not more than their friends,’’ Ingrid Flick told Austrian newspaper Kronen Zeitung in 2009. “This is how they’ll learn how to deal with money and its significance. I want them to be no different from their friends.”

Ingrid Flick once said she withheld a credit card from her teenage daughter, telling Germany’s Bunte magazine: “The kids have to learn that they’re nothing special, but that the name Flick obliges.”

The twins attended public high school in southern Austria, yet they’ve grown up with the trappings of wealth. When they were 13, they moved into their own villa on the grounds of Ingrid Flick’s Austrian estate. The residence had a disco, a playground and a tennis court, according to the Austrian newspaper Kleine Zeitung. The court was inaugurated by Ilie Nastase, a former world No. 1-ranked player.

They leave the management of their money to three executives with decades of experience in wealth management, investment banking and legal affairs. The investment goals of the family office seem modest. Friedrich Karl Flick’s goal was a 4 percent annual return after taxes, inflation and expenses. “Sounds little, doesn’t it?” he told Austria’s Trend magazine in 1998.

Yet even in death, Friedrich Karl Flick couldn’t escape the family’s notoriety. In 2008, grave robbers removed a coffin containing his body from a mausoleum in the lakeside town of Velden. They demanded a 6 million euro ($7.5 million at the time) ransom. Three men were convicted in the case. Flick’s remains were later recovered in Hungary and reburied in Austria.

“Finally, my husband is back home,” Ingrid Flick told Bunte magazine. “The hope and fear is over. The prayers were answered.” 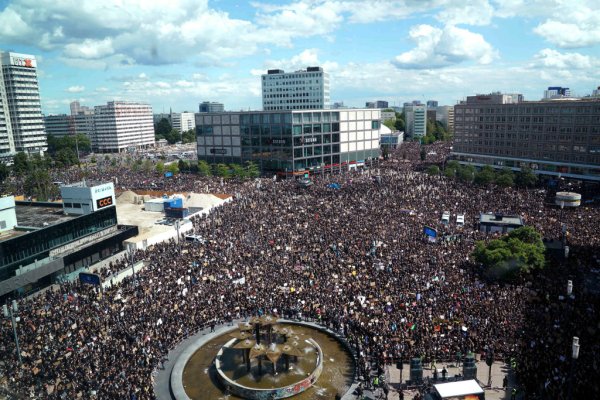 Germany Takes to the Streets Against Racism
Next Up: Editor's Pick