Michelle Knight has worked hard to move on with her life in the five years since she was freed after more than a decade of brutal captivity in a Cleveland house. But some things still draw her back to that dark time in her life.

“I do have triggers. Certain smells. Light fixtures with chain pulls,” she said in a recent interview for NBC’s Megyn Kelly Today.

The smells are all things that viscerally remind her of her captor, Ariel Castro, and the brutal beatings he often inflicted on her after he kidnapped her off a street in 2002.

“One of the meals he made for us was hot dogs, rice and eggs, all cooked in bacon grease and all served together in a bowl,” Knight, 37, said. “I get a nauseous feeling when I smell that.”

Knight, Amanda Berry and Gina DeJesus were all abducted by Castro and kept locked in his house on a residential street in Cleveland. The women said that they were kept locked up and chained when Castro was away and said they endured repeated beatings and rape. Knight said Castro impregnated her five times and beat her so badly each time that she miscarried. Berry had Castro’s child, who lived the first six years of her life in captivity until all four were freed on May 6, 2013.

Castro committed suicide in prison in September 2013, a month haver pleading guilty to more than 900 charges.

Knight has since married and has written her second memoir, Life After Darkness.

“I have found joy in my life,” she said. 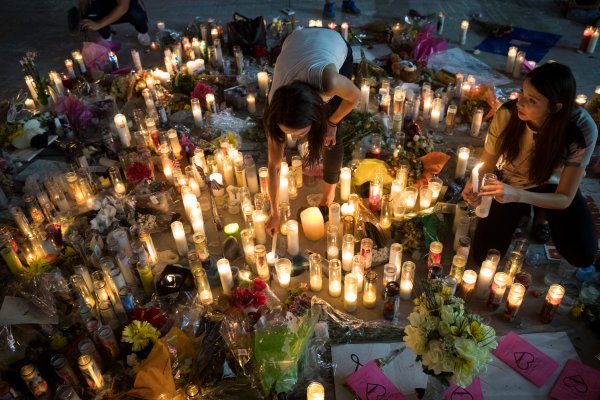 2017 Was a Record for Active Shootings
Next Up: Editor's Pick