Riding the Rails: Phnom Penh's Airport Train Is a Milestone for Cambodia

Roth Puthy doesn’t have a plane ticket or a suitcase. Nor does she intend on catching a flight. But on a recent Sunday afternoon, she boarded Cambodia’s new airport shuttle train anyway — just for fun.

The single-car train that connects commuters in Cambodia’s capital Phnom Penh with its international airport 10 km away has attracted some unusual patrons since opening last month. Seated among tourists in flip-flops and briefcase-toting foreign investors, Cambodian teenagers and families seek respite from 90 degree-plus temperatures. In a city sorely lacking in public space, the air-conditioned train, which is free to ride until August, offers a rare retreat.

“I’ve never see anything like it before,” says Puthy, 20, planted on a banquette beneath an air conditioner. She’s caught the train twice already, and says if she weren’t studying, she’d ride more often. Her 12-year-old niece, Sok Mean, agrees: “It’s so fun.”

The fact that trains are rolling again in Cambodia marks a major milestone in the country’s rapid development — from 1994 to 2015, the economy grew by an average of 7.6% a year and the poverty rate dropped from around 50% to 13% from 2007 to 2014. Transport Minister Sun Chanthol labeled the airport train’s launch last month a source of “national pride.”

Cambodia has a national railway network, built in the 1930s. But the Southeast Asian country’s trains gradually fell into disuse following the rise of the Khmer Rouge, a genocidal agrarian regime that killed an estimated 20% of Cambodia’s population between 1975 and 1979, many at the infamous Killing Fields. For decades after the regime’s fall, ambushes by vestigial Khmer Rouge squads and other guerrillas were a regular menace on Cambodia’s train lines. Carriages were outfitted with armored plates, and kidnappings weren’t unheard of. Service ceased in 2002.

It took 11 years and millions of dollars to get the trains running again, much of it courtesy of a $143 million grant from the Asian Development Bank and the Australian government. Construction was beset by delays and cost overruns; a withering 2014 report by ADB’s internal watchdog found “major design flaws” in the undertaking, including a failure to adequately compensate nearly 4,000 families displaced by its construction. Many were already among the country’s poorest, living in slums beside the derelict tracks.

Since 1993, the tracks played host only to the occasional handmade, bamboo lorry, an interim fix to help transport locals, goods, and U.N. officials between remote villages. The bamboo carts remain, but these days its cargo is mostly tourists riding the tracks for fun. Freight service resumed from the capital to the southern port of Sihanoukville in 2013. Passenger services followed in 2016. A 241-mile line under construction will extend to the Thai border and on to Bangkok, bridging a segment of China’s long-planned Kunming-Singapore regional rail network, which is hoped to one day link national railways from Yunnan province to the tip of the Malaysian peninsula and from Myanmar to Vietnam. Still, completion is a long way off.

Road space is at a premium as the train shuttles to the airport in Phnom Penh.
Eli Meixler—Time

And then there’s the airport tram, intended to relieve the capital’s traffic-choked roads and cut a 6-mile, hour long journey down to just 15 minutes.

It was closer to 45 minutes on a recent trip. The sole, rattling coach, more like a city trolley car, stopped for lorries and livestock as it ground past fields and factories in Phnom Penh’s outer suburbs.

Residents along the path are less than pleased by the progress, and the round-the-clock cacophony of a tram chugging through their neighborhood every 30 minutes, 24 hours per day. There’s also been a dramatic uptick in traffic accidents as drivers contend with a new challenge — the tracks. Many are unsure how to negotiate the metal rails embedded in the pavement without getting a wheel stuck. On a recent morning, at least a dozen motorbikes topple over in the course of about two hours.

Sem Channimol, 30, runs a roadside pharmacy along the rail’s final leg in a populous neighborhood beside the airport. In recent weeks, she says, her counter shop has become something of an emergency trauma ward, as the victims of motorcycle accidents pile up in her doorway, “all scratched up, with broken bones.”

“I want to move away from this area, but this is all I have,” Channimol says. “Everyone around here is angry but there’s nothing we can do it about it.”

“I think a lot of it was just the first three or four weeks of everyone getting used to everyone,” he tells TIME.

But the railways have historically had a deadly impact on the communities they traverse. A woman was struck and killed by the airport train on May 18, according to local media reports. Dozens more have been injured or killed in road accidents with trains in Cambodia’s rural provinces. People being run over after falling asleep on the tracks is also not uncommon.

“It should be all good news, and then someone goes and has an accident,” Guiry says. “Every time…something goes wrong, your heart’s in your mouth.”

Guiry hopes that safety will improve with the arrival of three carriages en route from Mexico, which will endow drivers with a better view of the road. The new carriages will also be equipped with Wi-Fi, restrooms, and televisions but whether the selfie-snapping regulars will stick around after the novelty wears off and ticket prices are imposed is up for question.

For those whom the train was intended: travelers going to and from the airport, the convenience makes all the difference.

“The next generation [wants] to reduce traffic and air pollution, so maybe they will support the train,” Kim Sokun, 38, tells TIME on the tram on a recent weekend. On his way to pick up a nephew from the airport, Kim was racing relatives who opted to take the family car. He beat them comfortably. 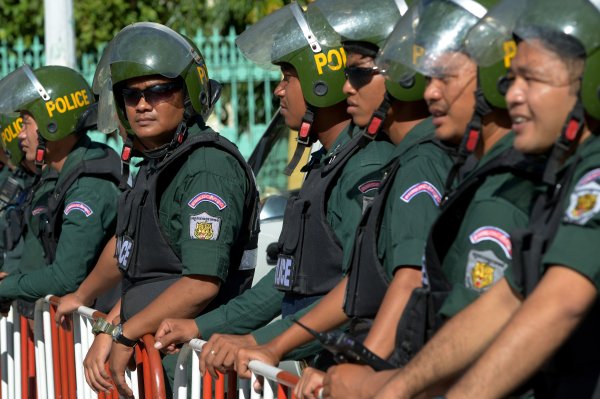