Childish Gambino in 'This is America'
YouTube
By Jennifer Calfas

While hosting and performing on Saturday Night Live over the weekend, Donald Glover dropped a new song and music video under his stage name Childish Gambino.

Titled “This Is America,” the visually remarkable music video, which contains some graphic imagery, is a stirring commentary from Childish Gambino on the state of America as he dances with children in a warehouse in one moment then guns down a gospel choir in the next.

Hiro Murai, a longtime collaborator with Glover on his FX hit Atlanta and his music videos, directed “This Is America.” The video follows Childish Gambino traveling through the warehouse as a multi-layered and constantly shifting scene unfolds behind him.

“This Is America” is the first song and video Childish Gambino has released since his 2016 Grammy-nominated album Awaken, My Love! Fans took to social media in the hours after the video’s release, praising Childish Gambino for his social commentary and artistry.

Along with the debut of the music video, Glover performed the song as Childish Gambino during his Saturday Night Live performance.

Glover hosted Saturday Night Live for the first time over the weekend ahead of the release of Solo: A Star Wars Story, in which he stars as Lando Calrissian. The multi-talented artist, who joked about his many passions in his SNL monologue, made history last fall at the Emmy Awards when he became the first black person to win a best-directing comedy award. He also won the Emmy for Best Actor in a Comedy. Earlier this year, he won a Grammy as Childish Gambino for Best R&B Performance with his hit “Redbone.” 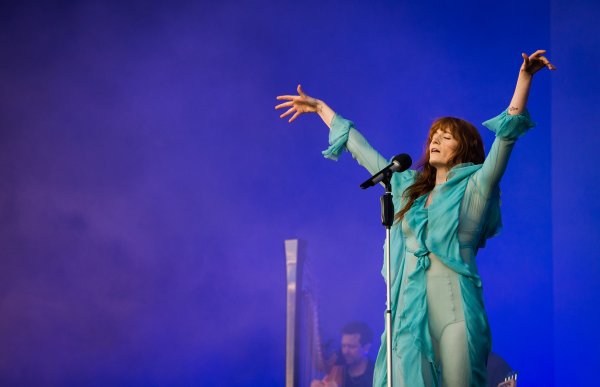