'This Island Is So Crazy.' Why Living on the World's Most Active Volcano Doesn't Scare These Hawaiians

Almost a year ago, Stacy Welch began building her home in the small community of Leilani Estates in Hawaii, on the most active volcano in the world. Then the lava came.

The 48-year-old restaurant worker and her daughter were among more than 1,500 people who had to evacuate their homes Thursday after Hawaii’s Kilauea volcano erupted, causing lava to flow onto the streets and high levels of sulfur dioxide gas to fill the air.

“I could see the orange glow through the trees,” Welch told TIME. “I knew it was erupting really close.”

As sirens sounded, warning residents to evacuate the neighborhood, panic spread among neighbors.

“I couldn’t breathe. I was super stressed. I was shaking really bad,” said Welch’s 19-year-old daughter, Maddy. “I walked to the end of the driveway and looked at everybody. We live next to some people who own a local restaurant in town. You could tell they were freaking out. They were loading up their safes.”

“It was crazy to see everybody scrambling,” Maddy added. “Cars speeding, sirens everywhere.”

The teen packed her family’s emergency gear and their pets, including two dogs and a goose. They left their home and headed to the Pāhoa Community Center, one of two shelter sites for those who had to evacuate from Leilani Estates and the Lanipuna Gardens Subdivision because of Kilauea’s eruption.

The Kilauea volcano is the youngest volcano in Hawaii and the most active volcano in the world, according to the U.S. Geological Survey. It has been erupting nearly nonstop since 1983.

“It’s always been considered a danger,” said Mike Poland, a geophysicist with the USGS. In the 1990s, a flurry of lava flows destroyed the village of Kalapana. More recently, lava almost inundated the village of Pahoa in 2014, the last time Kilauea had a major eruption prior to Thursday.

“It had been known that this was a high-hazard area,” Poland said. “And frankly, it was known it was only a matter of time.”

There have not been any reported injuries or deaths after Thursday’s eruption. But Poland said it’s unclear how long the eruption could last and how much lava could come out of the ground. The volcano was still erupting Friday morning local time, with lava spattering around the fissures. Poland said the eruptions could evolve to become more rigorous.

This photo provided by Shane Turpin shows results of the eruption from Kilauea Volcano on Hawaii's Big Island Friday, May 4, 2018.
Shane Turpin—AP

Welch said she understood the risks when she built her home in Leilani Estates, but never believed the worst would happen. “We’ve been preparing for this, knowing that we bought in Lava Zone 1,” Welch said, using the technical name for an area where lava flows are most likely to occur. “I didn’t think there would be any chance.”

Welch began building her solar-powered small home only 10 months ago. Now, like hundreds of other neighbors, she doesn’t know if it’s still standing.

“It’s kind of nerve-wracking,” she said. “I just built it. It’s like my baby. I built it without a mortgage so it’s paid off. It’s everything I own.”

“This island is so crazy. You have death around every corner,” her daughter, Maddy, added. “You have flash floods, tsunamis. Now we have lava. But I love it. I wouldn’t change it for the world. Hawaii is a community. People are just happy out here.”

That includes Tristan Rice, a 50-year-old carpenter who has been living in Lanipuna Gardens for about three years. Rice said he was swimming in the ocean when the evacuation was ordered. He left the area before he even had time to change out of his swimming shorts. Still, he could not be shaken.

“It should be easy to rebuild,” he said. “Most people get scared and leave. I’m going to stay.” 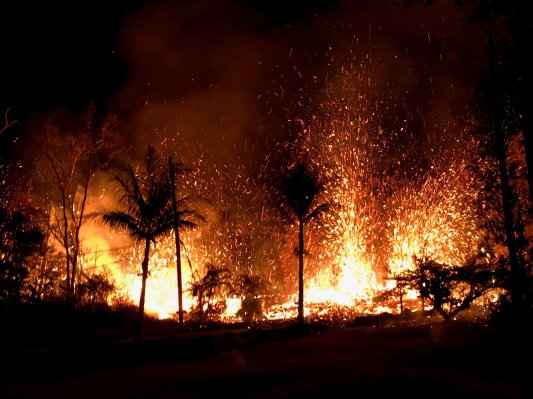 Hawaii Volcano at Risk of Explosive Eruptions That Could Eject 'Ballistic Projectiles': The Latest on the Kilauea Volcano
Next Up: Editor's Pick