Why Venezuelan Migrants Are Making Handbags Out of Worthless Banknotes

In the dusty Colombian town of Maicao, four men and women huddle along a shady patch of concrete and form an assembly line. One unpacks a rubber-banded heap of banknotes. The next person folds each bill in half. Another performs a few more folds. Finally, the last one in line makes the braid that turns the finished product into a handbag. The process takes about eight hours, and each bag is made up of 500 banknotes worth less than 50 cents in total. They retail for $12.

“I’d be so hungry if it weren’t for these bags,” says Orlando Silva, the young man in charge of the business, who asked TIME to use a pseudonym because he fears for his safety. In January 2017, Silva showed up on the streets of Maicao, a northern Colombian town just 7 miles from Venezuela’s border, with no passport, no money and no place to sleep.

Like so many other Venezuelans fleeing their country’s economic crisis, the 26-year-old spent months broke and hungry, roaming northern Colombia’s mesquite-cloaked region of Guajira. And then, a year after he arrived, Silva finally found an opportunity that would make him some cash: the handbag-making business.

Orlando Silva sells handbags made out of braided banknotes, like this one, for about $12 each.
Wes Michael Tomaselli

Except instead of using soft leather or fine silk threads, he turned to a different material. Braiding together worthless banknotes of bolivares, Venezuela’s failed currency, to create purses, handbags and wallets, Silva now earns just about enough money to eat. He uses two or three denominations for each bag—the 500 banknotes are usually worth between 25,000 and 50,000 bolivares, which today amounts to 10-20 cents.

His customers come from Bogota, Medellin and other parts of the country to Maicao, a town notorious for its flood of cheap contraband goods. (When requesting anonymity, Silva and others claim Venezuela’s national guard roam Maicao, looking for dissidents; he also worries that his new business could affect his chance of returning to Venezuela.)

Silva’s new trade shows the tragic state of Venezuela’s inflation, which currently stands at an annual rate of 10,500%, according to a local Bloomberg index, and is projected by the International Monetary Fund to soar to 13,000% by the end of the year. Venezuela’s economic collapse is the result of years of over-reliance on oil revenues, and over-spending on social programs. Under Nicolas Maduro, who was elected in 2013, the country printed currency to make up for a shortfall in public spending—“a perfect cocktail for hyperinflation,” says financial analyst Henkel Garcia of the Caracas-based Econometrica. “The bolivar is dead. Venezuela will need a new currency.”

The crisis since Maduro’s election has forced some 1.5 million people to flee because of political persecution, chronic food shortages, and scarce medical supplies. “I left because the economy in my country destabilized to a point where you had to work so much just to have a little money and that would barely get you by month-to-month,” says the gangly Silva, dressed in dirty clothes and worn-out sandals.

The situation in Venezuela means Colombia is now facing a humanitarian crisis on its border. The United States in April pledged $16 million in humanitarian aid to the UNHCR for the Venezuela crisis, but the agency says it needs about another $30 million to meet the needs of migrants and refugees. The U.N. Refugee Agency (UNHCR) in Colombia fears another 1.7 million Venezuelans could flee this year alone, more than double the estimated 1.5 million who left during 2014-2017. “I think hyperinflation is definitely exacerbating the situation,” says Jozef Merkx, Representative for the UNHCR in Colombia.

People wait to withdraw money from an ATM at a bank in Caracas on Feb. 21, 2018.
Roman Camacho—SOPA Images/LightRocket/Getty Images

Crisis at the Border

The streets of Maicao paint a desperate picture. Not far from where the handbags are made, a group of Venezuelan prostitutes shoot glances at passers-by. At night, jalopies brimming with poor, exhausted migrants pull into town after hours spent snaking through the desert on one of more than 100 illegal trails. The most recent wave of migrants—those who started arriving in early 2017—are more hungry, more impoverished, and therefore more vulnerable, according to the UNHCR.

Border officials say they’re hearing reports of discrimination, sexual assault and violence along the illegal routes, including one young girl who filed a report saying she was sexually assaulted by armed groups on the trails and then forced to watch the execution of another migrant. A census is underway in Colombia to better profile the crisis. Still, the UNHCR says it has concerns about the increasingly invisible condition of these Venezuelans and emphasize the growing need to protect them.

In neighboring Brazil, the UNHCR has set up a shelter and nutrition response for about 50,000 to 70,000 who have already crossed into northern Brazil. But Colombia is bearing the brunt. The country suffers one of the highest rates of inequality in the world—its unemployment rate is 9% and over 50% of the labor force is informal. That makes the absorption of poor, job-starved Venezuelan migrants a challenge for Colombia’s leaders.

An estimated 550,000 Venezuelans have already crossed into the country. Of those, about 60% are classified as ‘irregular,’ like Silva. They lack a passport and therefore cannot apply for formal documentation here. The Colombian government provided around 170,000 passport-holding migrants with a special status that guaranteed them basic rights—including access to Colombia’s health services and the right to work. However, those without passports are left hanging in the balance. In February, Colombia started deportations of anyone found without documentation. Silva fears he could be next.

Maduro’s government insists there’s a U.S.-sponsored economic war being carried out against Venezuela. Behind the rhetoric, Maduro has raised the minimum wage three times this year and plans to launch new banknotes this June. Those measures appear to mean pumping up the monetary supply even more – a.k.a. higher inflation. If that happens, it seems migrants like Silva will have plenty of worthless banknotes for making their handbags.

On a gritty sidewalk in Maicao, Silva claims that with the handbags, “I can defend myself,” but adds that he still doesn’t make enough to afford a place to sleep. He’s been sleeping on the streets since he showed up over a year ago. The money he makes off the bags gets split among his crew. “At least it’s enough to eat,” he says.

Still, he’s afraid of getting caught. With a jolt of paranoia in his voice, he says he is risking 10-30 years in prison because it’s against the law to show the devaluation of the Venezuelan currency. “It’s a crime against Venezuelan patriotism.” 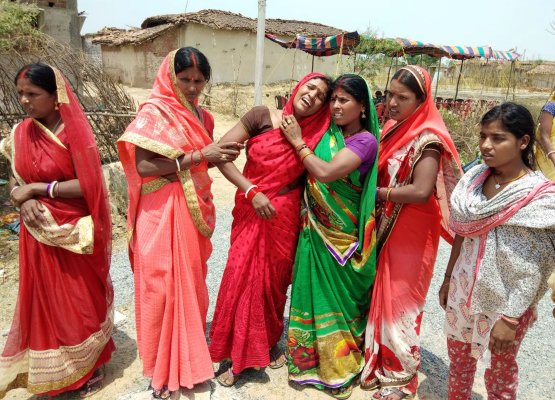 A Second Teenager Has Been Raped and Set on Fire in India
Next Up: Editor's Pick