Ayn Rand in front of Grand Central in midtown Manhattan in 1957.
New York Times Co.—Getty Images
By Olivia B. Waxman

Fans of Ayn Rand’s The Fountainhead consider the novel timeless, with its themes of individual freedom and the heroism of the creator. But the story — about an innovative architect of skyscrapers who grows frustrated by critics skeptical of his vision — is also a direct product of the historical moment leading up to its publication 75 years ago Monday, on May 7, 1943.

Rand experts note that she wrote the book in response to what she saw as a very specific threat to liberty at that point in time — and that the evolution of that threat helped keep the book popular among her fans for decades following.

Indeed, as she worked on the book during World War II, the threats to liberty were clear. Rand was watching closely the advances of the Nazis as well as that of communism in her native Soviet Union. She had come to the U.S. in 1926 aspiring to be a screenwriter and hoping to make a fortune, a goal she adopted after her family never recovered when their property was seized during the Russian Revolution.

But she was even more concerned about what she saw as a subtler form of fascism within the U.S.: the work of President Franklin Delano Roosevelt, architect of the New Deal.

She initially started writing The Fountainhead as “a meditation on popularity,” a response to the actors and fellow screenwriters trying to make it in the golden age of Hollywood in the ’30s. But the more she listened to the way her fellow artists and thinkers talked about communism, the more she thought they were “very misinformed,” tending to “idealize and romanticize it,” says Jennifer Burns, author of Goddess of the Market: Ayn Rand and the American Right.

“She felt people needed to know the truth about communism, so The Fountainhead is the beginning of that project,” says Burns. “As she grew more disenchanted with the New Deal and more and more concerned about what she saw as communist influence in American life, she stops writing the book midway through and dives into Republican politics.”

She volunteered for Wendell Willkie’s 1940 presidential campaign. Though he lost to Roosevelt, she gained connections to a group of people who believed in limited government, and who are considered the earliest generation of the 20th century conservative movement. (Some conservatives, however, had trouble with her because of her atheism.)

The Fountainhead turned out to be a sleeper hit. Its popularity spread by word of mouth. In fact, Burns says the first printing of the 700-page book was deliberately small because paper was rationed at the time, so reprints were ordered in response to the demand. Rand would become even better known in 1949 when the Warner Bros. film adaptation of the book, starring Gary Cooper and Patricia Neal, hit theaters. But TIME’s original reviewer thought the film was so bad it might have the opposite effect of what Rand intended: “Apparently aimed at Communist and other critics of the American way, Fountainhead will provide some of the corniest grist for Soviet propaganda mills that Hollywood has produced in a long time.” (Rand herself wasn’t crazy about the film either, according to Jeffrey Britting’s 2004 biography.)

What was going on in the years following helped the book catch on even more. “It anticipates a broader discussion in the postwar era about the dangers of ‘mass man,’ the danger of white collar conformity. There will be a whole rash of books by other thinkers worried about conformity in mass society and how does one maintain one’s individuality,” says Burns.

Rand’s second book, Atlas Shrugged, came out in this period, in 1957. David Boaz, executive vice president of the Cato Institute, puts Jack Kerouac and Ayn Rand in the same boat, as writers of the ’50s who were “part of a nonconformist rebellion against postwar conformity.” He says their work points towards the cultural revolution of the ’60s and ’70s and even the entrepreneurial revolution that starts in the ’80s.

Rand thought President Kennedy’s famous request in his 1960 inaugural address, the instruction to “ask not what your country can do for you; ask what you can do for your country,” was “fascist,” Boaz says. “She thought both halves were wrong. You don’t owe anything to your country, and you shouldn’t be asking for money,” he explains. Though Rand’s political preferences didn’t match that of the electorate — she and Barry Goldwater, who lost in a landslide in 1964, were mutual fans — the progressive government philosophies of Kennedy and his successor Lyndon B. Johnson drove many American conservatives to appreciate Rand’s message. As the “Great Society” programs expanded the role of government in people’s lives, she found a readership on college campuses, as a counter to the counterculture, through her Objectivist newsletter, reading groups and classes. Burns describes her as a “gateway drug to life on the right.”

And as trust in government began to fall, trust in her ideas rose. Many Americans who had seen what Boaz calls “big government” as helpful, during the New Deal and the prosperous years following World War II, began to change their minds. “In the late ’60s and early ’70s, people see the failure of Vietnam, the corruption in Watergate, and the ‘stagflation’ economy,” Boaz says. “All those things pushed people into a libertarian direction; you see a flowering of libertarian scholarship around that time.”

Though Rand died in 1982 at 77, her ideas get new life whenever fears of expansion of government hit a new level. Most recently, she saw a surge in popularity in 2008, the year of the market crash and President Obama’s election. TIME noted then that “The bad economy has been good news for Rand’s legacy”; for that year, combined sales of The Fountainhead, Atlas Shrugged and We the Living reached a whopping 800,000.

Burns says Rand’s arguments can also be seen in conservative talking points even when she’s not name-checked, for example in rhetoric about homeowners being bailed out for irresponsible behavior or even in Mitt Romney’s famous 2012 gaffe remarking that 47% of people “are dependent upon government.”

“This idea that the world can be divided into looters and moochers, people who are productive and people who are not productive, that was a narrative device she erected in Atlas Shrugged,” says Burns. “It became a founding narrative of modern conservatism that there are some people who seek to free ride on the effort of others, that they’re either incompetent, or bad people scheming or trying to be lazy.”

Her ideas have guided many of the most famous entrepreneurs in Silicon Valley, a place notoriously fearful of government regulation, and some of the highest offices in America are now held by Randians. Speaker of the House Paul Ryan, who has been known to give copies of Atlas Shrugged to staffers, has called Rand “the one thinker” who’s “the reason” he went into public service, and President Trump told USA Today in April 2016 that he identifies with The Fountainhead’s protagonist. The book, he added, relates to “everything.” 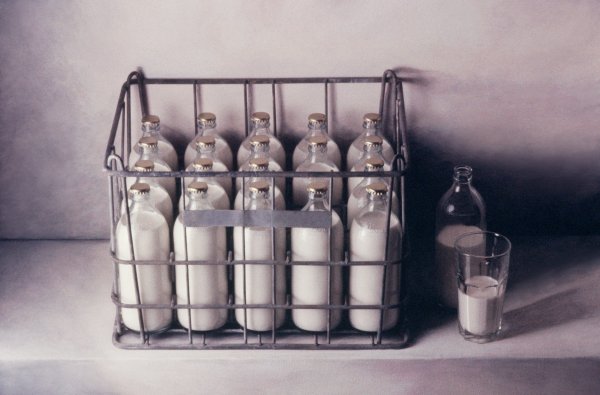 Why We've Been Fighting About Milk for 10,000 Years
Next Up: Editor's Pick