Could Ocean’s 8 Mark the Return of the Great Glam Caper?

The big selling point of Ocean’s 8, a riff on the Ocean’s Eleven guys-pulling-off-heists series, is its all-women cast. In the trailer, Cate Blanchett and Sandra Bullock cook up a jewel heist while striding along a New York City sidewalk, looking as if they own not just the sidewalk but the whole city. Their pockets may be empty, for now, but they’ve got the million-dollar look. Bullock wears a drapey trench coat that’s the color of money, Blanchett a tailored cheetah-print wrapper, whose every blurry black dot whispers class. But what’s most striking about this movie isn’t that it stars a bunch of women–among them Sarah Paulson, Mindy Kaling and Rihanna–in the types of cool-crook roles that would normally go to men. It’s how unapologetically glamorous the whole thing looks. And though we may cling to the illusion that today’s movies are filled with glamour, we’re actually slogging through a serious cashmere shortage, moviewise. Why can’t we have more champagne and châteaus in our movies? Will Ocean’s 8 be the movie that revives the glam caper?

Fantasy is a multibillion-dollar business in Hollywood, but much of that money is poured into–and, eventually, flows out of–movies based on comic books. Meanwhile, fantasies of luxury, escape and intrigue, with stories for grownups that feature attractive individuals getting away with preposterous crimes, have become as rare as a flawless emerald.

There’s no good reason for these pictures to be so scarce. Great directors have contributed to the genre. In Alfred Hitchcock’s 1955 dazzler To Catch a Thief, Cary Grant and Grace Kelly swerve and glide through the French Riviera in search of a jewel-snatching cat burglar. A later but no less stylish specimen is Norman Jewison’s The Thomas Crown Affair, with Steve McQueen as a wily, thieving millionaire and Faye Dunaway as an even sharper insurance investigator. The picture’s ’60s-luxe vibe–including a teasingly erotic chess game between the two stars–makes it pure pleasure to watch, though John McTiernan’s 1999 remake, with Pierce Brosnan and Rene Russo, is even better. In the updated version, the always-dashing Brosnan steals not money but a priceless Monet. Jewels and art always make for better visual movie totems than mere cash.

This time around, the target of the heist is Daphne Kluger (Anne Hathaway)
Barry Wetcher—Warner Bros.

The element that truly distinguishes the glam caper from the ordinary heist movie–even great ones like Rififi (1955) or The Italian Job (from 1969, but remade, respectably, in 2003)–is the pronounced presence of women. In the 1999 Thomas Crown, Russo is both elegant and sensuous, but it’s her dusky wit that really makes the performance. More recently, in 2015, Alicia Vikander brought mod magnificence to Guy Ritchie’s The Man from U.N.C.L.E., based on the ’60s TV show. The picture, which also stars Armie Hammer and Henry Cavill as Cold War–era spies from opposite sides of the Iron Curtain, ticks off nearly all the necessary glam-caper boxes, including luxurious locales and good stunt driving. But as handsome and funny as the male leads are, it’s Vikander–with her voice a mingling of silk and smoke–who holds our attention.

You could argue, if you wanted to be unimaginatively reductive, that the characters played by Russo and Vikander are just eye candy, svelte hangers for beautiful clothes. But that–aside from demeaning the actors–misses the deeper ways that even seemingly light entertainments can speak to us. Flattened, rigid applications of the notion of the male gaze have done more to damage our understanding of how movies work than to further it. What about the human gaze? And the fact that both men and women, gay and straight, find pleasure–if not always the same kind of pleasure–in looking at women? These movies provide escape, but not necessarily the mindless kind. We’re all just coming to terms with how much toxic masculinity hurts men. It’s all the more reason for men to relax and let women do more of the driving. The glam caper, as a genre, offers infinite possibilities for female characters whose problem-solving capabilities are at least as good as, or better than, those of their male counterparts.

That’s not to say clothes are unimportant. Any glamorous heroine’s allure lies in great costuming. But there, too, we’ve been left hungry. Truly beautiful contemporary clothes have become a rarity in the movies–and it will count for something if, in Ocean’s 8, costume designer Sarah Edwards redresses even just that single wrong. Our ideas of glamour have become distorted by our definition of what gives a garment or accessory value: we know how to read the meaning of logos and brands, but we’ve lost the gift of assaying the more rare value of, say, a suit that falls from the shoulder line with impeccable propriety, or of the way a suede boot can take on almost liquid form as it’s unzipped. Russo’s wardrobe in Thomas Crown, an assortment of supple coats and sexy yet businesslike turtlenecks, are a case in point.

Good movie clothes speak movie language, not brand language. They’re like lines of dialogue written in folds and shadows; the way they move with, or against, an actor becomes part of the performance. A good glam caper needs great clothes, ensembles that inspire not “How much is it and where can I get it?” acquisitiveness but something deeper and less tangible, a kind of moody yearning. That’s a tall order for a bunch of cheetah spots. But it’s never too late to learn how to read their secret language. 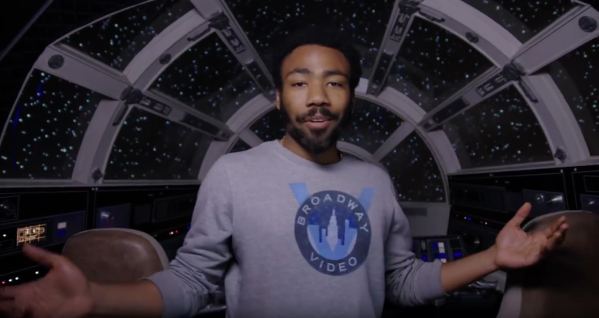 Let Donald Glover Be Your Tour Guide Through Lando's Millennium Falcon
Next Up: Editor's Pick