A customer gets a shave at a barber shop illuminated by the torch function of a mobile phone in a village on the outskirts of Alwar, Rajasthan, India on April 17, 2018.
Anindito Mukherjee—Bloomberg/Getty Images
By Kate Samuelson

Every village in India now has access to electricity, Prime Minister Narendra Modi said on April 29, one day after a remote village in Manipur, northeast India, was added to the national grid. It was a symbolic victory for Modi, who promised in August 2015 to electrify every Indian village within 1,000 days. He described April 28 as a “historic day in the development journey of India”–but more work is needed to bring the country fully into the electric age.

Indian workers install a new electric pole for power lines on the outskirts of Ajmer, in the Indian state of Rajasthan on April 14, 2018
Himanshu Sharma—AFP/Getty Images

Modi was elected in 2014 on the back of pledges to modernize rural areas and improve living standards. At that time, roughly 270 million people in India lacked electricity–accounting for just under a third of the global access deficit. The gap hindered economic growth, education and health care. But while Modi has hit his target, the government only requires 10% of a village’s houses and public places to be electrified to count. By that standard, nearly 97% of India’s roughly 600,000 villages already met the criteria in 2014.

Millions of Indians, particularly in remote villages, still rely on dangerous kerosene lamps. Just six of India’s 29 states, including Kerala and Gujarat, have all homes on the grid, according to recent government data. In poorer states such as Jharkhand, more than half of households have no power lines, while those that do experience hours of blackouts every day.

Modi has announced a $2.5 billion plan to electrify all households by the end of December 2018–just a few months ahead of parliamentary elections. The challenge is steep: poorer Indian households struggle to afford the high cost of electricity; the Modi government would need to install connections at a much faster rate; and state-owned power companies are already saddled with debt. But with states like Uttar Pradesh, where 44% of households lack electricity, holding the biggest representation in Parliament, Modi is hoping that fulfilling his promise of “Power for All” will lead his party to a bright political future. 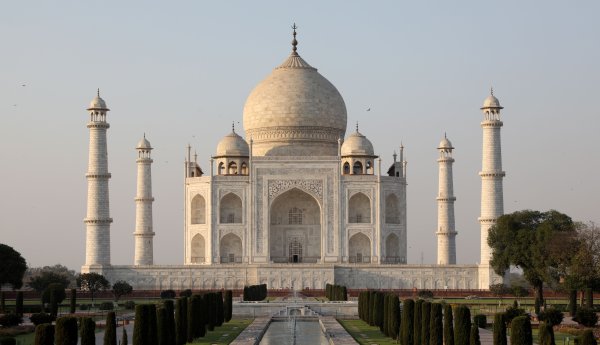 Pollution Is Turning the Taj Mahal Brown and Green
Next Up: Editor's Pick