A Catholic high school in Michigan has ended a plan to make female students wear “modesty ponchos” at prom if they are dressed inappropriately.

After some parents and students at Divine Child High School in Dearborn, Mich. said the “modesty poncho” plan was body shaming toward girls, the school’s principal said they would not be handed out at the prom.

Principal Eric Haley said in a statement through the Archdiocese of Detroit that the ponchos were not intended to make students feel uncomfortable, but were instead being used to remind them of the school’s dress code. The ponchos had previously been put on display in the school with a note warning that they would be given to girls who wore prom dresses that broke the dress code.

The Associated Press reports the length of the ponchos suggested they were made to mask cleavage. According to the school’s dress policy for the prom, dresses cannot have super-low necklines or any cutouts that fall below “the traditional bra line,” the AP reports. Exposed cleavage and visible midriffs are also against the rules for the May 12 dance.

While “modesty ponchos” will no longer be a part of any female students’ prom outfits, Haley warned that students may still have to cover up if they don’t meet the dress code.

“We encourage our students to tailor their outfits or provide their own wraps or shawls that would meet our requirements,” he said. “If necessary, we may also provide wraps and shawls, as we have done at school functions for many years.” 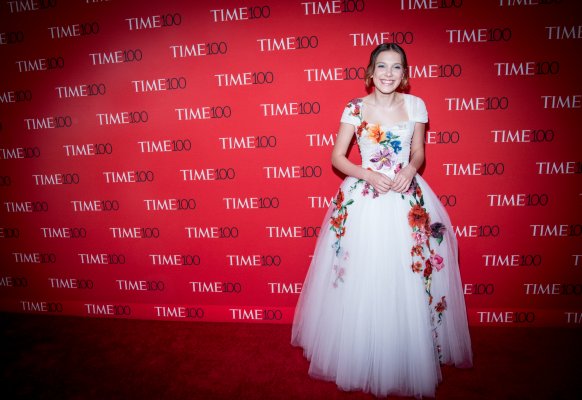