We now have the first look at Prince Harry and Meghan Markle as official newlyweds.

Their elegant, star-studded ceremony on May 19 at St. George’s Chapel in Windsor Castle was viewed by millions around the world and culminated in the couple reciting their vows and tying the knot.

Prince Harry, Duke of Sussex and Meghan, Duchess of Sussex emerge from the West Door of St George's Chapel, Windsor Castle, in Windsor, on May 19, 2018.
Ben Birchall—AFP/Getty Images

The couple took their vows at St George’s Chapel in Windsor Castle under the purview of Archbishop of Canterbury, Justin Welby. They were joined at the church by relatives and friends, including Harry’s best man Prince William, his father Prince Charles and grandmother Queen Elizabeth II. Markle and the prince then took part in a carriage procession through the town of Windsor, which was watched by a select number of guests invited from across England.

The ceremony and carriage ride will be followed up with a reception within the castle complex. It’s the same location where Harry’s father also had his own marriage reception to Camilla, Duchess of Cornwall, in 2005. Later in the evening, the group will decamp to the nearby property of Frogmore House for an even more intimate reception. 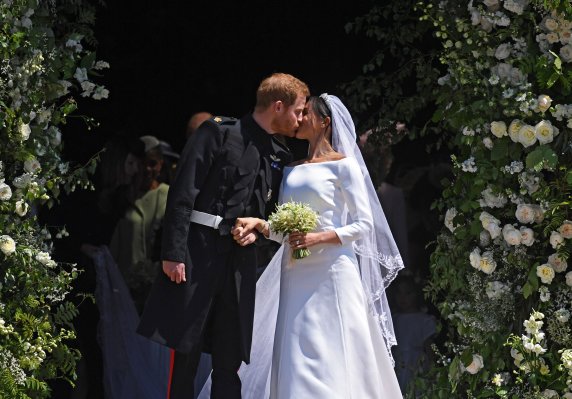 Prince Harry and Meghan Markle's Royal Wedding Kiss Was a Smooch to Remember
Next Up: Editor's Pick