The Boss: Preethi Herman Is Helping Women Gain Equality Around the World

I grew up with a terrorizing fear. From the time I was nine, the Indian movies I watched told me that if a girl was sexually assaulted, she would have to kill herself to save her family’s honor. A girl’s virginity and ‘purity’ were paramount.

This was a central theme of the pop culture movies in my home in south India. I remember arguing with my neighbors about this when I was 11 years old, and being told that women just have to be ‘subservient’ since being born a woman was punishment for a transgression in a past life. I was told that my biggest duty in this world was to be a dutiful wife.

I didn’t have access to the internet or even a library for a reference point or a different reality check. But I still believed, however, that the arrangement society had decided for me was unfair. I wanted to be able to wear clothes I liked, have access to an education and not have to seek permission from my father, and later a husband, to do what I wanted. I thought women who were sexually assaulted should not have to kill themselves. I shared these thoughts and got laughed at and was told I would bring shame to my family.

And so, at the age of 11, with a deep sense of sadness that kept me bawling the whole night, I promised myself that even at the cost of my family, community and maybe even my life, I would do all the things I wanted to achieve in life.

This must have been the fire I needed to spark my rebellion against subservience. Instead of becoming a dutiful wife, I went on to study communications in the city of Bengaluru in South India. I travelled alone, lived alone and supported myself — none of which got me approval ratings from the society I belonged to.

After university, in a quest to truly understand the challenges that people with less political power faced, I worked with marginalized groups including tribal communities in the eastern part of India, Dalits who are excluded due to caste discrimination and in poor neighborhoods in Karnataka, located in South India.

One of my early career highlights was working with women who were elected representatives in local government in rural India. Most of these women were illiterate and disempowered to be leaders, but showcased immense political will and leadership to their communities, especially when they were supported and motivated. They inspired and solidified my mission to facilitate and support potential changemakers to challenge oppressive power structures and create positive change in their communities. I joined Change.org in 2012, establishing it as the people’s platform in India, growing it from fewer than 200,000 members to 10 million.

Today, as the Global Executive Director of the Change.org Foundation, I lead a passionate team that aims to ensure that citizens around the world have a voice in the issues affecting their communities and countries. Our teams in Asia and Latin America help create communities of changemakers, generate media and social media attention to critical issues and work with politicians so they understand the power and importance of citizen-led activism.

In India, I started She Creates Change — a program to build a women’s community based on principles of civic organizing. This program supports women who start campaigns based on their own experiences of injustice or inequality. We work with these women to amplify their voices and build a supportive community around their mission. The result is larger, stronger movements of women champions, whose voices get featured prominently in the media and help reshape unjust national policies and practices.

Masooma, a female genital mutilation survivor and a She Creates Change participant, has been leading the largest campaign to end FGM in India and has become an international spokesperson for an issue that until recently was not even acknowledged in my home country due to cultural secrecy and repression. Masooma is just one of the hundreds of examples of highly engaged citizens taking action on underrepresented issues that need critical intervention.

From Mexico and Argentina to Indonesia and Thailand, women are leading campaigns that range from protesting gender-based violence to securing education access and ending taxes on menstrual products.

And yet, the fight for equality, for respect and dignity is far from over. The global #MeToo movement, the #NiUnaMenos protests in Latin America and everyday small and big fights that do not get the attention they deserve, remind us of this every single day.

We are working towards providing the She Creates Change program and similar support interventions to countries around the world. Through their campaigns on change.org and the support we provide, more women and men will have a voice and be able to create meaningful change for their communities.

More than 25 years have passed since an 11 year old cried her heart out through several nights, as she steeled herself to live life the way she wanted at a very heavy price of being isolated, shamed and physically hurt. I wish I could reassure her that she’s not alone and she will fight for her total freedom together with millions of people.

I have come a long way in understanding that this is not my exclusive story or fight. It’s a fight that a majority of the world’s population encounters every day.

I’ve also learned through my work that the struggle for gender parity, or any social change, won’t be won in one fight, but at all levels — in our communities, in the media, in our politics and in our laws. We have powerful new online tools and platforms that can create opportunities for people-led organizing.

However, transformational change will not occur on its own. We have to create the vision, systems and engagement to help it flourish. We have to support the millions of people who are stepping up to change things positively in their communities around the globe.

That’s what I hope to inspire, serve and lead. 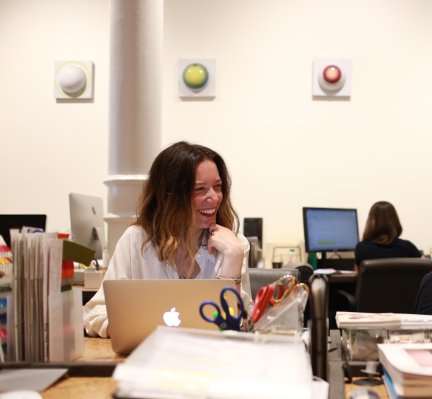 The Boss: How STATE's Jacq Tatelman Is Helping Children Around America
Next Up: Editor's Pick