What Experts Say About the Real History in Kanye West's Tweets on Republicans, Democrats and Race

Kanye West onstage at an event for Adidas in Los Angeles on Feb. 17, 2018.
Neilson Barnard—Getty Images for adidas
By Olivia B. Waxman

When Kanye West resumed tweeting this month after a social-media break, his fans and followers embraced his stream of thoughts on fashion and other topics. But, when he began focusing many of his tweets on his appreciation for President Donald Trump, the reaction was quite a bit more divided. While Trump himself thanked the Grammy Award-winning rapper and Kim Kardashian West defended her husband, others pushed back against West’s ideas. Some of his friends and professional associates, such as John Legend, attempted to get him to change his mind about Trump and U.S. politics — prompting West to share screenshots of the conversations.

Then, on Monday, West shared the historical basis for his views by tweeting screenshots of text-messages with someone named Steve:

West is right that Abraham Lincoln was a Republican who was instrumental in freeing people who were enslaved in the United States and in supporting their equality during the Reconstruction period, and that the Democratic Party supported the Southern slave owners — and later had a central role in undermining the expansion of equality. However, the story of Republicans, Democrats and race in America is more complicated than that. Which is exactly what Legend and radio personality Charlamagne Tha God told West in subsequent texts shared by the rapper:

The Republican Party was founded in the run-up to the Civil War and was the party of racial justice and equality during the Civil War and Reconstruction in the late 19th century. As Kanye West and Steve discussed in a conversation that the artist tweeted later on Monday, the Republican Party in the executive branch and in Congress undertook serious efforts to gain rights for African-Americans.

But, as Chance the Rapper wrote on Twitter after President Trump praised his defense of Kanye West, while it’s true that black people do not have to be Democrats — and that the history definitely bears that out — experts say that focusing solely on the name of the party doesn’t tell the whole story.

For one thing, says Philip A. Klinkner, an author of The Unsteady March: The Rise and Decline of Racial Equality in America, it’s important to remember that, while one hopes that political parties are motivated by ideals and philosophies, they are also motivated by power. The equations of political power in the U.S. have shifted dramatically since then, and so have the parties’ ideas about how to take equality into account when it comes to seeking power.

For example, Klinkner says, as more Western states entered the Union in the late 19th century, it became less politically important to the Republican Party to court Southern votes from the newly enfranchised freedmen, so it was easier for them to turn away from the cause of furthering equality through Reconstruction plans. “Republicans are figuring out they can still maintain political power without having to rely on propping up these Reconstruction regimes in the South,” he says. Meanwhile, as early as the 1910s and 1920s, African Americans migrated to Northern cities for better job opportunities, and these areas were controlled largely by Democratic Party machines that became especially attentive to their needs to court their votes.

The ways of getting votes changed just as norms about equality changed, and the parties changed their attitude toward ensuring equality for voters, as rapper Talib Kweli told Kanye West in another tweeted conversation.

With the coming of the Great Depression and the New Deal, an even greater shift took place, as black voters were drawn “from the party of Lincoln into the party of Roosevelt,” as Klinkner puts it. First Lady Eleanor Roosevelt advocated for anti-lynching legislation, and President Franklin Delano Roosevelt created the Fair Employment Practices Committee by Executive Order in 1941. But not everyone in the President’s party agreed with those moves. Many Southern Democrats were not on board with the changes, and eventually South Carolina Senator Strom Thurmond led the creation of the spinoff “Dixiecrat” party in reaction to the party’s presidential nominee Harry S. Truman’s pro-civil rights platform for the 1948 election.

The period from then into the 1960s Civil Rights movement has sometimes been called the Second Reconstruction, but — as John Legend explained in his text to West — the parties identified with the two sides had switched from their orientation during the original Reconstruction Era.

“When Lyndon Johnson (a Democrat) signed the voting rights act and civil Rights act into law, he acknowledged that the Democrats would probably lose the south for a generation. And eventually he was right,” wrote John Legend in his text to West. “White Southerners eventually left the Democratic party because it became known as the party that fought more equal rights for people of color.”

“We see an accurate discussion about LBJ,” says Shayla C. Nunnally, author of Trust in Black America: Race, Discrimination, and Politics. “Even as a southerner, LBJ saw his support of the Civil Rights Act would be a part of what would be an eventual realignment of white southerners from the Democratic Party and indeed that is what happened.”

The history leading up to President Lyndon B. Johnson signing the Civil Rights Act of 1964 is complex. President John F. Kennedy, prior to his assassination, had aligned himself with Martin Luther King Jr. But Johnson, who was Kennedy’s VP, had voted with Southerners in Congress against civil rights between 1937 and 1957 and even gave a segregationist speech against an anti-lynching bill on the Senate floor. Still, after he became president, the optics of children and civil rights activists being attacked by fire hoses and police dogs in Birmingham, along with the bombing of the 16th Street Baptist Church within the same six month period in 1963, gave Johnson a sense that calm and order must be restored. With the 1964 act he began to oversee a series of civil rights advances that would change the country — but even then he hadn’t solidified the association of his party with the cause of civil rights. In fact, a bigger percentage of Republicans in Congress voted for the 1964 Civil Rights Act than Democrats did.

One of the Republicans who voted against it was the leader of the party, Barry Goldwater, the Republican nominee for president that year. Though he only carried six states, in what’s considered one of the biggest landslides in U.S. history, his vote was a key moment, says Klinkner. “Even though there are more Republicans who vote for it as a percentage in Congress, the leader of the party famously says no, so you begin to see the switch in the votes,” he says. “Southern states that had never gone Republican at least since Reconstruction [switch], and the black vote goes up for the Democrats and it’s been there ever since.”

Among elected officials, many Southern Democrats became Southern Republicans, starting with Dixiecrat Strom Thurmond’s defection. This laid the groundwork for the “Southern Strategy” that Richard Nixon pioneered during his successful campaign for the White House in 1968. Nixon’s platform of law and order and states’ rights was a response to rioting in American cities, adds Nunnally, and his language “invited” white voters who were opposed to civil rights advances to vote Republican instead. By the period that followed, though there remained many different reasons why a person would vote for a particular candidate, the Democratic Party had become the major political party associated with federal support for civil-rights causes.

Today, the percentage of African Americans who identify as Democrat hovers around 80-90%. 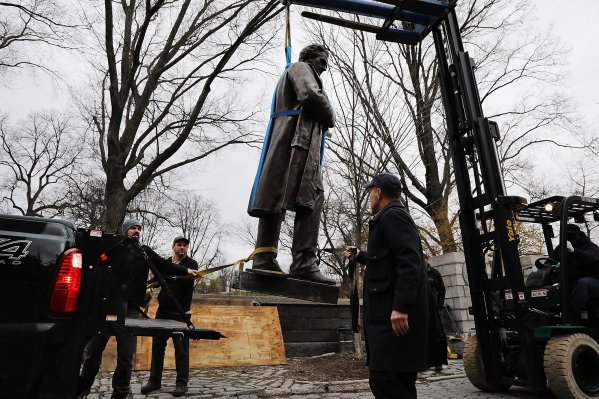