The official royal wedding order of service for Prince Harry and Meghan Markle’s nuptials at St. George’s Chapel in Windsor Castle is officially out.

The royal wedding order of service includes a break down of Markle and Harry’s wedding service events, from what time members of the royal family like Queen Elizabeth, Prince Charles and Prince William will enter the church to the music that will be played during the wedding service. The order of service also reveals the Harry and Meghan’s vows, the reading from the Song of Solomon that Princess Diana’s sister Lady Jane Fellowes will give and that Karen Gibson and The Kingdom Choir will sing “Stand By Me” at the end of the service.

In another nod to Princess Diana, the order of service says the hymn “Guide Me, O Thy Great Redeemer,” which was played at Princess Diana’s funeral, will also be played during the service.

You can see the full order of service PDF here.

The service for Markle and Harry’s royal wedding begins at 12:00 p.m. G.M.T. — 7:00 a.m. ET — and will be officiated by the Archbishop of Canterbury Justin Welby.

As the wedding date neared, Kensington Palace provided regular updates about details regarding the ceremony and procession. While Meghan Markle and Prince Harry kept their guest list under wraps, Kensington Palace announced that 2,460 people will be invited to “watch the arrivals of the Bride and Groom and their guests and the carriage procession as it departs from the castle.”

After the ceremony ends, Prince Harry and Meghan will begin a Carriage Procession from the chapel through Windsor Town and back to Windsor Castle, according to Kensington Palace. 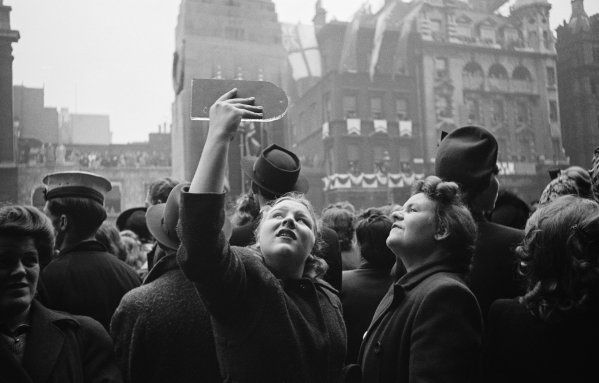 How to Watch the Royal Wedding Like a 1940s Londoner
Next Up: Editor's Pick