A police officer in Myanmar who testified that police were to “entrap and arrest” two Reuters reporters is now himself facing up to two years in prison under disciplinary charges, Reuters reports.

Capt. Moe Yan Naing told a court in Yangon on April 20 that he was instructed to frame Reuters journalists Wa Lone and Kyaw Soe Oo, who were investigating a massacre of Muslim Rohingya men and boys, by giving them documents related to security operations in Rakhine state. The reporters were arrested and charged under Myanmar’s Official Secrets Act, under which they face up to 14 years in prison.

According to Moe Yan Naing, police officers were threatened by a superior with imprisonment if they failed to “get” Wa Lone.

The officer’s testimony invigorated press freedom activists and civil society groups following the case, with the Embassy of Denmark calling for Myanmar to “bring the shameful process to an end and release Wa Lone and Kyaw Soe Oo now.”

“The truth has finally come out,” the Embassy said in a statement.

On Sunday, a police spokesperson said the officer had been punished “according to police disciplinary act,” but did not elaborate on the specific charges. In court, Moe Yan Naing said he was charged under two sections of Myanmar’s Police Disciplinary Act. Each charge carries up to a one-year sentence, but it is not clear how long he will serve. He has been detained since the journalists’ arrest in Dec.

Moe Yan Naing’s wife and children were also evicted from a police dormitory in Nay Pyi Taw, the country’s capital, less than a day after his testimony, Reuters reports.

Over 700,000 Rohingya have been displaced from Rakhine state into neighboring Bangladesh since August, fleeing scorched-earth military operations that the U.N.’s rights envoy warned bear the “hallmarks of genocide.”

This weekend, U.N. Security Council envoys traveled to Bangladesh to speak with humanitarian workers and Rohingya refugees. On Sunday, they visited the sprawling Kutupalong refugee camp in Bangladesh, now the largest in the world, home to an estimated 500,000 people. On Monday, the U.N. delegation is meeting with Bangladeshi Prime Minister Sheikh Hasina before traveling to Myanmar to speak with Aung San Suu Kyi, Myanmar’s de facto head of state.

In a separate inquiry, the U.S. State Department announced last week that it was gathering interviews and documentation to investigate allegations of atrocities committed against the Rohingya that could ultimately be used to prosecute members of Myanmar’s military for crimes against humanity. 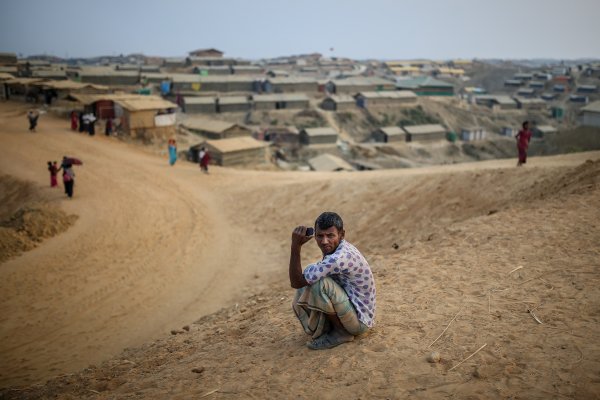 U.S. Investigates Allegations of Atrocities Against Rohingya
Next Up: Editor's Pick