Rep. Patrick Meehan (R-Pa.), who came under scrutiny after it was revealed he used taxpayer dollars to settle a sexual harassment case, announced his resignation Friday from the House of Representatives, effective immediately.

“Though I wish my time in Congress would have finished in a more satisfying manner, I am proud of our accomplishments and thank the residents of my District for their confidence in me over the last eight years,” he said in a statement. “I recognize that there are constituents who are disappointed in the manner in which I handled the situation that lead to my decision not to seek re-election and wish I had done better by them.”

The New York Times reported in January that the congressman used thousands of taxpayer dollars to settle a claim of sexual misconduct. Meehan’s accuser, a former aide, alleged that he had professed romantic feelings for her, the Times reported, and he grew hostile when she did not respond in kind.

Following that report, Meehan, who is currently serving his fourth term in Congress for Pennsylvania’s 7th district had announced he would not seek reelection. “With the knowledge I would not be standing for another term, I have decided that stepping down now is in the interest of the constituents I have been honored to serve,” he said Friday.

At the time of the Times report, Meehan was on the House ethics committee, investigating other allegations of sexual misconduct in the chamber. House Speaker Paul Ryan promptly removed him from his position.

Meehan said Friday that he would give $39,000 to the U.S. treasury as reimbursement to tax payers for the severance payment, a payment he said would be made within a month his resignation.”I did not want to leave with any question of violating the trust of taxpayers,” he said.

Under Pennsylvania law, Governor Tom Wolfe will announce the date for a special election within ten days after Meehan’s resignation. In February, Pennsylvania’s Supreme Court reworked the Congressional map following a gerrymandering lawsuit which experts say favor Democrats, rendering it unlikely that Meehan’s seat will remain in Republican hands. 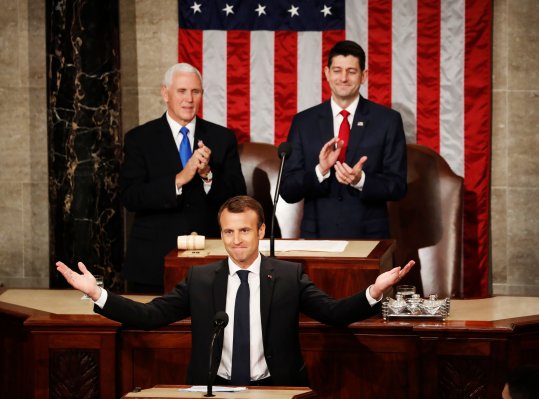 Emmanuel Macron's Address to Congress Was Full of Criticism for President Trump
Next Up: Editor's Pick