What America Must Do Now, After North Korea's Summit with South Korea

North Korean leader Kim Jong-Un (R) signs his name in the visitors' book before an inter-Korean summit with South Korean President Moon Jae-In at the Peace House at the south side of the truce village of Panmunjom in the demilitarized zone
Aflo—Shutterstock
Ideas
By James Stavridis
Admiral Stavridis (Ret.), a TIME Contributing Editor, was the 16th Supreme Allied Commander at NATO and is an Operating Executive at The Carlyle Group. His new book is 2034: A Novel of the Next World War. His previous nonfiction book was Sailing True North: Ten Admirals and the Voyage of Character

We are witnessing a new chapter in the long, contentious post–World War II history of the Korean Peninsula, and President Donald Trump deserves a significant measure of credit. Whether by plan or happy circumstance, the combination of his aggressive military posturing (“fire and fury”), sharply edged name-calling (“little rocket man”) and pressure on China to enforce extant United Nations sanctions has helped bring both South Korea and North Korea further along the path to meaningful dialog than we have seen before. The two nations have now declared their intent to work together to remove nuclear arms from the peninsula and formally end the Korean War.

This moment of diplomatic rapprochement was helped by three other crucial factors. Kim Jong Un has rapidly consolidated a viable nuclear weapons program that, in his mind, opens the door to negotiate a way to finally enter the club of recognized nuclear states — and makes negotiations overall more advantageous for him. The fortuitous timing of the Olympic games provided a kind of psychological “firebreak” in the superheated rhetoric at the end of last year. And while often overlooked, South Korean President Moon Jae-In has shown consistent willingness to negotiate — a sound strategy when the alternative would be millions of Koreans dead on both sides of the demilitarized zone.

Will this work? Shall there be champagne and Nobel Prizes for all my friends? While I would assess the far most probable outcome as being a successful long-term negotiated solution, there is a smaller but significant possibility that we return to pre-Olympic levels of tension and an even smaller chance of a “wheels come off the car” war on the peninsula. The world is at a vastly better moment than six months ago. But sadly, the fundamentals are still dangerous.

In the interim, America should spend less time focusing exclusively on North Korea and more time listening to the South Koreans. We tend to see Kim in a single dimension — a semi-crazy dude with a really bad haircut. They understand him in three dimensions and have a clear-eyed view of the dystopian kingdom over which he rules with cruelty and harsh despotism.

This expansive and inclusive mindset should also extend to getting more nations involved in our discussions with Kim. Despite a natural tendency to want to get all the credit if we can solve this, we need to get China to the table with us. A minimum of four-party talks (U.S., North Korea, South Korea and China) will be required to get this deal done. And bringing Japan and Russia to the table for six-party talks is not a bad idea. This cannot be a U.S.-North Korea confrontation.

To that end, while President Trump will bring a lifetime of negotiating skill to the table, he needs professional backup on this one. The stakes are just too high. Our professional diplomats and military team have to fully engage. Selecting Admiral Harry Harris, the outgoing commander of U.S. Pacific Command, as the new U.S. Ambassador to South Korea — instead of to Australia, as had been the plan — is a superb choice. I know him well and would bet on his talent and touch to be an enormous force for good here. (It is a bit of a bummer for the Ambassador personally that he must give up Shiraz for Soju, but such is life.)

When looking at our own interests, we need to decide what North Korean weapons plan we are willing to accept. Despite much happy-feeling talk from Pyongyang, it seems highly unlikely Kim will give up all his nuclear weapons. While I believe we should accept a limited arsenal, with an inspection regime and a diminution of the ballistic missiles to deliver them, if we are not going to do so (which President Trump has said already), we should be prepared to walk away from the table.

That said, we do not need to rush away. We will need to be patient. We will not have a few more handshakes and photo-ops and then all part as friends. Kim will more than likely continue to operate from the playbook of his father and grandfather before him: get the West excited about peace, extract concessions, then either walk away or hide the remnants of the program. If “yes” truly means zero nuclear weapons on the peninsula, getting there will probably require a multi-year negotiation and an even longer period of dismantlement, verification and inspections — perhaps lasting five to ten years.

All the while, we should hope for the best, but plan for the worst. Solving this with soft power and diplomacy is the objective, but we better be ready to “fight tonight” if necessary. This is no time to reduce U.S.–South Korean training and exercises. We need close military coordination with other Pacific allies, including notably Japan and Australia. NATO needs to remain firm and prepared to engage. We have detailed military plans (so-called “contingency plans” and “operational plans”) that need to be validated and resourced.

Whatever our red lines, though, we need to commit to them and see real action from North Korea before we reduce sanctions. Whichever way this goes, there will be an ever higher premium on intelligence and surveillance. This means more aggressive cyber penetration (working closely with South Korea), new exquisite satellite surveillance capabilities and pooling intelligence with our regional allies and possibly even with China (the latter obviously in highly compartmented ways). This is not Ronald Reagan’s “trust but verify,” given the North Korean record of grabbing the football just as we are about to kick it — or the champagne glasses just before we are about to cheers to peace. A better approach would be “verify, then start to trust.” 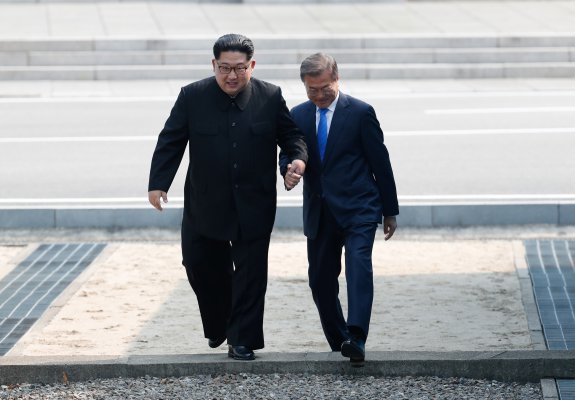 Here's What Kim Jong Un and Moon Jae-In Said to Each Other in Their Historic First Meeting
Next Up: Editor's Pick