President Donald Trump hosted American athletes who competed at the 2018 Winter Olympics and Paralympics at the White House on Friday — but some of the PyeongChang games’ most famous faces opted to skip the ceremony.

Ice skater Adam Rippon, skier Lindsey Vonn and snowboarder Chloe Kim are among the marquee names who skipped the trip to Washington. Five American Olympians — including cross-country skier Jessie Diggins, freestyle skier David Wise and biathlete Maddie Phaneuf — made the trip to Washington to meet with Congressional leaders on Wednesday about their climate change advocacy work with Protect Our Winters Alliance. But they won’t attend the White House celebration because they made the “Congressional briefing their priority,” a spokesperson for the athletes told USA Today.

Some athletes cited Trump’s politics as their reason for skipping the White House meeting, while others said they had scheduling conflicts. Almost 200 athletes were expected to attend the event, according to the Washington Post.

President Trump did not mention the absences in his remarks at Friday’s event. Instead, he lauded some of the other athletes in attendance, including figure skater Vincent Zhou, the gold medal-winning women’s hockey team and the men’s curling team, which also took home gold at the 2018 Olympics.

Here are some of the big names —including Adam Rippon, Lindsey Vonn and Chloe Kim — who chose to skip the 2018 Winter Olympics celebration at the White House this year:

Rippon, a 2018 TIME 100 honoree and the first openly gay American athlete to qualify for the Winter Olympics, told TIME last month that he wouldn’t attend.

The figure skater, who won a bronze medal as a member of the U.S. figure skating team in PyeongChang, famously said he didn’t want to meet with Vice President Mike Pence before the 2018 Olympics and criticized the Vice President’s views on gay marriage.

Bronze medallist Lindsey Vonn of the United States celebrates during the victory ceremony for the Ladies' Downhill on day 12 of the PyeongChang 2018 Winter Olympic Games at Jeongseon Alpine Centre on Feb. 21, 2018 in Pyeongchang-gun, South Korea.
Matthias Hangst—Getty Images

Vonn, who won a bronze medal in PyeongChang in downhill skiing, told CNN in December 2017 that she would “absolutely not” go to the White House after the 2018 Olympics, which took place in February.

“Well I hope to represent the people of the United States, not the president,” Vonn told CNN at the time. “I want to represent our country well. I don’t think that there are a lot of people currently in our government that do that.”

Kim, the 17-year-old snowboarding sensation who won a gold medal at the 2018 Olympics, also didn’t attend Friday’s ceremony. She told the Washington Post she had a wedding to attend.

Kim, who was also a 2018 TIME 100 honoree, has spoken out about causes aligned against Trump in the past. In March, she tweeted her support for March for Our Lives, the massive gun control rally organized by the survivors of the deadly Parkland, Fla. shooting earlier this year.

Freestyle skier Kenworthy, who is also openly gay, opted not to make the trip to Trump’s White House.

Kenworthy has spoken out about Trump in the past, telling TIME in July 2017: “I think we had been two steps forward with Obama. And it’s a step back with the Trump administration.”

Hamlin, who served as the flag bearer for Team USA in the 2018 Opening Ceremony, didn’t attend Friday’s festivities, according to USA Today. The luger said she planned on visiting the Johns Hopkins Children’s Center on Friday morning instead.

Shiffrin, who won a gold medal in giant slalom at the 2018 Olympics, chose not to visit the White House, according to the Washington Post. She did not speak publicly about her decision, but told CNN in 2016: “The value that [Trump] portrays to everyone is not ideal… I don’t think women are going to be looking to him. I think they still look to Hillary [Clinton].”

Shaun White, the legendary snowboarder who took home a gold medal in the halfpipe event in PyeongChang, was another notable name who skipped Friday’s festivities, according to the Post. He told the Post he was attending a wedding.

The figure skater, who became the first American woman to land a triple axel in PyeongChang, told the Washington Post that she was too busy with rehearsals for Dancing With the Stars to make the trip to Washington. 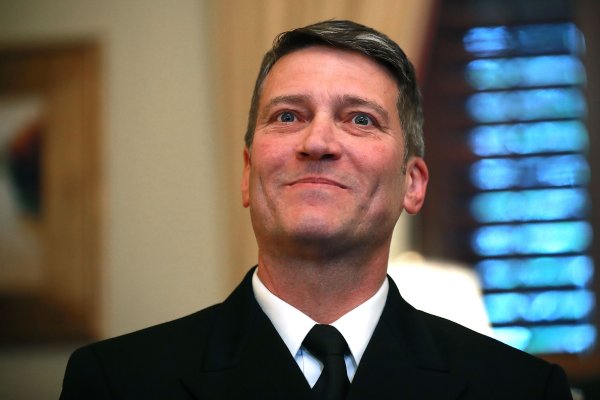