“[I]t is very much to be regretted that so remarkable an animal should be yet without a full ‘biography.’” -John Woodhouse Audubon

This year marks the 170th anniversary of the beginning of the California Gold Rush. James Marshall’s discovery at Sutter’s Mill in 1848 dramatically changed not only the social and political environments of the west coast of North America but its natural environments as well. For that reason, mining in the Mother Lode Gold Belt today is limited to a fraction of what it could be. Yet before processes like hydraulic mining scarred hillsides and polluted rivers, fur hunters had stripped California’s near shore places of animals that once numbered in the tens of thousands. Some 49ers were witnesses to the damaged marine mammal populations, and one in particular left behind a haunting tribute to the fur rush that first stimulated global interest in the Golden State.

John Woodhouse Audubon, the youngest son of famed naturalist John James Audubon, came to California in October of 1849 with a group of miners, but he also had hopes of continuing his father’s work in collecting natural history specimens and illustrating western nature. Unfortunately for the younger Audubon, the trip proved a bust both in terms of striking it rich in the diggings and for plant and animal collecting. Yet he did document an important local species in The Quadrupeds of North America, in the series’ third volume published in 1854 (after his father died). The book describes a sea otter that Audubon reportedly saw while traveling the San Joaquin River on his way to the gold fields. The creature was shot at on two occasions by members of the party before disappearing toward an opposite riverbank. If it truly was Enhydra lutris they encountered, then it was likely one of the last individuals of the species to inhabit the inland waters and tributaries of the San Francisco Bay.

Nearly half a century of sea otter hunting in California by Russians, conscripted Alaskan natives, and Americans had decimated the local population and reduced otters to near extinction. Spanish officials were unable to stop foreign poaching; later Mexican authorities attempted to regulate hunting, but it was too little, too late. Sea otters had paid greatly for their beautiful, dense furs — the thickest hair of any animal on earth.

In the second half of the 19th century, United States citizens continued to pursue the animals that first called Americans to the Pacific coasts of North America. By the 1860s and 1870s, geopolitical and commercial changes in the region shifted the sea otter hunt into an ocean-wide quest to find and kill the last members of the species. Marine mammals were vigorously pursued throughout both the Aleutian and Kuril island chains, particularly following the purchase of Alaska by the United States in 1867. The hunt was finally banned during the Progressive Era in the early 20th century, but the damage to Pacific wildlife had already been done, and may never be fully reversed.

Audubon’s description of one of the last northern California sea otters was accompanied by his painting “Enhydra marina,” and it is undoubtedly the most beautifully textured and life-like image of the animal to that time, silky, glistening fur and all, but it displays it uncharacteristically clutching a fish. Otters typically don’t do that.

The work suggests the often-tragic blend of human fascination with and lack of knowledge about the marine mammals that has historically plagued them. We tend to see images of sea otters today and think of them as cute and cuddly critters that float on the water at Pacific tourist destinations or frolic in aquarium exhibits. Yet envisioning them as endearing coastal icons obscures a bloody past, a history that almost saw them become totally extinguished from the western coasts of North America. We should therefore think more about the sea otter and its complex history, for as Audubon noted over a century and a half ago, the animals still need a full biography.

Richard Ravalli is Associate Professor of History at William Jessup University in Rocklin, California. His first book, Sea Otters: A History, will be published by University of Nebraska Press later this year. 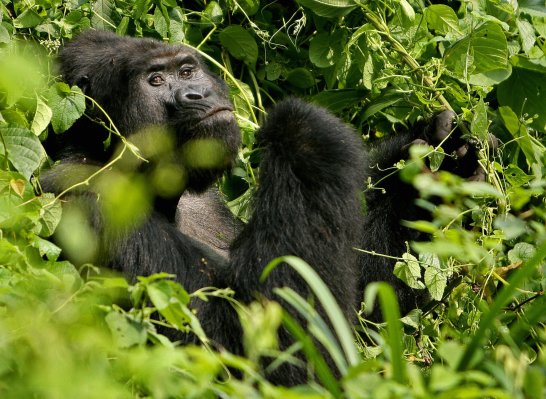 New Study Reveals There Are More Gorillas Than We Thought
Next Up: Editor's Pick