A video of 12 bodyguards running alongside North Korean leader Kim Jong Un’s limo as it drove away from the first session of the landmark inter-Korean summit, the first for more than a decade, has gone viral on social media.

The bizarre footage shows the 12 suited men jogging as they surround the unmarked car as it heads down a main round and around a corner. The clip, which is just over a minute long, quickly made waves on Twitter, where people took advantage of its meme-worthy content.

Much of the world’s attention has been focused on the historic meeting between Kim Jong Un and South Korean President Moon Jae-in which is taking place today at the peninsula’s demilitarized zone (DMZ).

The meeting is historic for many reasons, most significantly because Kim Jong Un become his dynastic regime’s first ever leader to visit the South when he stepped over the raised concrete slab marking the border between the two Koreas, who are still technically at war.

Earlier Friday, President Donald Trump tweeted “KOREAN WAR TO END!” in response to the meeting. “The United States, and all of its GREAT people, should be very proud of what is now taking place in Korea!” he added.

Correction: The original version of this story misstated North Korean leader Kim Jong Un’s title. He is the supreme leader, not the president. 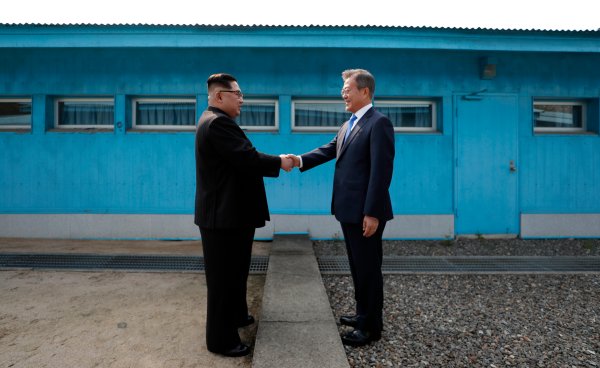