'A Once-in-a-Lifetime Opportunity.' This Woman Shares What It Means to Attend the Royal Wedding With Her Mom

Catherine Cooke and her daughter Julie-Ann Coll (right) from Londonderry, Northern Ireland, received an invitation to the wedding of Prince Harry and Meghan Markle at Windsor Castle on May 19.
Michael Cooper/WPA Pool—Getty Images
Ideas
By Julie-Ann Coll
Julie-Ann Coll, a mother of four from the Waterside in Londonderry, Northern Ireland, was shocked to receive an invitation to Prince Harry and Meghan Markle's wedding in the mail. The 35-year-old runs a support group called Life After Loss, specifically aimed at people affected by the loss of a baby. Coll's mother, Catherine Cooke, 53, who works at the Londonderry-based Foyle Women's Information Network, also received an invitation. The Foyle Women's Information Network encourages the cooperation of women's groups and individuals from diverse socio-economic, political and cultural backgrounds.

I was out shopping for an outfit with my 12-year-old son for his confirmation when my husband texted me saying I had a letter from the Lord Lieutenant. I texted him back asking him to open it and see what it was about. I couldn’t wait to hear the answer — two seconds later I phoned to ask: ‘Well, have you opened it?’ The phone went quiet and then my husband told me in a shocked voice that I had been invited to Harry and Meghan’s royal wedding.

I sat in stunned silence in the changing room with my son. My husband then began to read me the letter word for word — so I knew he wasn’t making it up. I couldn’t believe it. I had met Prince Harry at a royal garden party in 2017 and I’d been joking with friends that I’d get an invite to the royal wedding… but I never actually thought I would! When I told people I was really going they didn’t believe me; I had to show them the letter to prove I wasn’t making it up.

Immediately I phoned my mom and asked her to be my plus one, but about an hour and a half later she got her own invitation! I think she truly deserved to be invited — she has worked so hard for so many years, whereas I’m relatively new to the charity sector. When my mom got invited I decided to take my mother-in-law as my plus one instead. She lost her husband in January, and as she really loves the royals we thought it would be a nice thing for her to look forward to. It was a no-brainer. My 17-year-old daughter was a wee bit annoyed she wasn’t my plus one — but I’m sure she’ll get over it!

I received an invitation to the wedding because of my work for a support group called Life After Loss. I lost my son at 22 weeks in 2004 — he was just too small and too weak to survive, but I still had to give birth and went through labour. I always wanted to do something in his memory, but work and life and having more children got in the way. In 2012, I saw a poster advertising a support group called Life After Loss based near Belfast. They wanted to expand over in Northern Ireland and I decided to give it a go. Four years ago I started up my own Life After Loss group.

The group is basically just a few people who sit around a table with a cup of tea and chat and are there for each other. The most we’ve ever had turn up is 14 people and there have been nights when I’m there on my own. I still go though, as I think it’s important for someone to be there. I’m hoping we’ll expand in the future and get bigger and better. The media attention I’ve received for being invited to the royal wedding has really helped raise the profile of the group; I’m actually going this afternoon to pick up a cheque from someone who read about Life After Loss in the paper.

I’ve picked out my outfit for the wedding already. It’s a turquoise dress with flowers on and I think it’s classy and comfortable. It was hard looking for a dress for the royal wedding as you really have to dress appropriately! We’ve had an offer from a local business who want to make our hats for the big day, which is great. My mom, my mother-in-law and I are going to make a weekend of it; we’ll fly to Windsor on the Friday and come home on the Sunday. It’s a once in a lifetime opportunity and I can’t wait.

As told to Kate Samuelson. 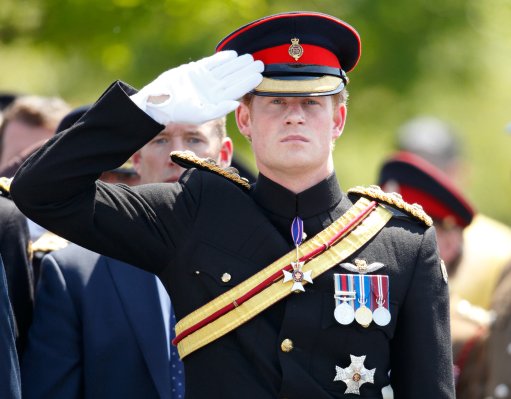 Prince Harry's Army Comrades Are 'Pretty Excited' About Their Royal Wedding Role
Next Up: Editor's Pick