As North Korea's Kim Jong Un Makes a Historic Trip to the South, Here's What to Expect

On Friday, history will be made as North Korean leader Kim Jong Un crosses the border for a highly-anticipated summit with the South’s President Moon Jae-in. Here’s what you need to know about the high-stakes summit and its potential impacts on the peninsula and beyond.

Where is the summit taking place?

Friday’s summit will take place in the Peace House in the village of Panmunjom, located in the heart of the demilitarized zone (DMZ) separating North and South Korea. A neutral, so-called “truce town,” Panmunjom was the location of the armistice signing that ended fighting in the 1950-53 Korean War, and has since been a site for inter-Korea talks and visits from world leaders. It’s also a popular tourist destination, and plays host to visitors wishing to glimpse a view over the border to the secretive North.

The two previous summits between the Korean leaders took place in Pyongyang, making Kim’s step into the South the first time a North Korean leader has crossed the border since his family’s dynasty took power 65 years ago. Kim’s venture into the South “shows balancing and reciprocity, and shows he’s ready to do things in a different way and understands the symbolism,” John Delury, Associate Professor at Yonsei University, tells TIME. A buffer between the North and the South, the DMZ is a heavily fortified, 160-mile long border, divided in two and patrolled by the armies of both countries. “The middle of the DMZ feels like the Cold War; it’s very tense and very hostile,” Delury says. “By meeting there, Moon and Kim are going right to the centre of the problem and the hostility.”

All eyes will be on the meeting between Kim and Moon, whose one-day summit schedule includes two sessions of talks, a tree planting ceremony and a joint announcement, Reuters reports. Kim will be accompanied by nine high-ranking North Korean officials, among them his sister, Kim Yo Jong, who led the North’s delegation to the PyeongChang Winter Olympics in February, and Kim Yong Nam, the North’s nominal head of state.

Kim’s meeting with Moon comes relatively early on in his tenure as the North’s leader. Since his father Kim Jong Il died in 2011, the younger Kim’s leadership has been marked by a ratcheting up of nuclear missile tests and strong rhetoric. However, the regime has been hit by international sanctions in recent months, with the intent to put pressure on North Korea’s nuclear program. “Given his long-term ambitions, he needs to get those economic sanctions lifted,” says Delury, “but on the other side of the equation is confidence, because he’s come off a great year of demonstrating nuclear missile capabilities that gives him a lot of leverage.”

A son of North Korean refugees, Moon himself helped orchestrate the previous summit in 2007, and ran for the presidency on a platform of engagement with the North. “He’s only a year into his term, is very popular and has a strong mandate, and so he comes into this meeting with a lot of political capital,” says Delury.

Have there been talks between the Koreas before?

Leaders of the two Koreas have only met twice before, in 2000 and 2007. On both occasions, Kim Jong Il hosted leaders of South Korea’s liberal government in Pyongyang. Both meetings made some progress on agreements to relieve tension on the peninsula, and former South Korean President Kim Dae-jung won the Nobel Peace Prize for his role in brokering the 2000 summit. But these agreements, part of the South’s ‘Sunshine Policy’ of engagement, involved payments of billions of dollars of aid to the North’s regime, and yielded little in return in the way of peace on the peninsula. Duyeon Kim, Visiting Senior Research Fellow at the Korean Peninsula Future Forum, says Friday’s meeting will differ from previous summits because of the North’s advances in nuclear technology, rising concerns of a U.S. military attack against the North and Moon’s ambition to be “the South Korean president to finally bring peace to the peninsula.”

What is the expected outcome?

Analysts are not expecting a major breakthrough addressing the big questions of denuclearization or reunification on the peninsula as a result of this meeting. “Moon’s challenge will be agreeing on a joint declaration that goes beyond feel-good rhetoric,” says Duyeon Kim. While denuclearization will be high on the agenda, Delury says the meeting is more likely to act as a “working summit,” where possible steps to relieve tension and end the armistice may be discussed. Delury says the summit is also more likely to touch on other “softer, lower hanging fruit on the cultural level,” such as the reunion of divided families, tourism, and cultural exchanges such as those seen at the Olympics and the South’s recent artistic delegation to Pyongyang.

The meeting will also be carefully monitored in the U.S., looking ahead to a highly-anticipated potential summit between Kim and President Donald Trump, slated to take place within the next two months. “The real game will be between Trump and Kim on the nuclear issue,” says Duyeon Kim. “The Americans aren’t looking for a revelation, but an indication that Kim is serious,” Delury agrees. Moon’s task will be to welcome Kim in historic style, while testing whether or not the North’s leader has the substance to live up to his word. 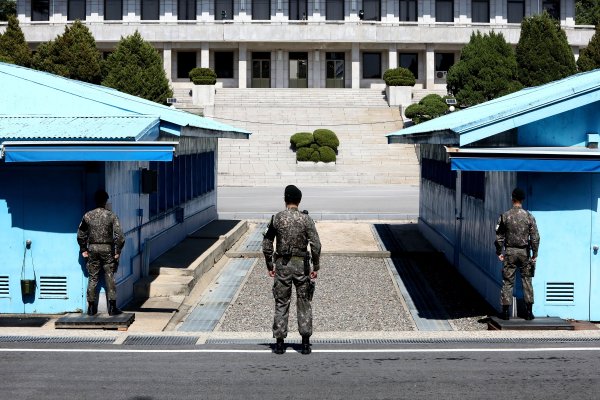