By Katie Reilly and Philip Elliott

McCain announced he was diagnosed with brain cancer in July 2017, after doctors discovered an aggressive brain tumor called a glioblastoma. On August 24 of this year, he announced he was discontinuing medical treatment; he died a day and a half later, surrounded by his family.

Prior to his death, McCain, said his current term would be his last and freely discussed the implications in his memoir, The Restless Wave, released in May. “I’m freer than colleagues who will face the voters again. I can speak my mind without fearing the consequences much. And I can vote my conscience without worry,” McCain wrote.

But even before his diagnosis, McCain, who served in the Senate since 1987 – he was reelected for a fifth time in 2016 – was viewed as a “maverick,” someone who refused to heed to party orthodoxy. Consequently, he was a key vote for both sides of the aisle: in the last year alone, he helped Senate Republicans ensure their tax reform legislation passed the chamber and sank Majority Leader Mitch McConnell’s health care proposal – which would have repealed much of Obamacare – by voting against it.

Consequently, his death – and the seat that is now open – has the potential to reshape both the U.S. Senate and Arizona politics. Here’s what will happen to McCain’s Senate seat.

Arizona Gov. Doug Ducey, a Republican, will appoint a temporary replacement to represent the state in the U.S. Senate until the next general election. Arizona is one of 36 states where Senate vacancies are handled this way, according to the National Conference of State Legislatures.

Under Arizona law, Ducey must appoint someone in the same political party as the vacating senator — which means McCain’s seat must be filled by a Republican. Ducey won’t be making any announcements about McCain’s replacement until after the late senator is laid to rest, his office told the Associated Press Sunday.

“Now is a time for remembering and honoring a consequential life,” Ducey said in a statement.

At the same time, Arizona Sen. Jeff Flake has decided not to seek reelection, and his seat is already up for a contested election this year. Due to election deadlines, it is unlikely that there will be also an election for McCain’s seat in 2018 – which means Ducey’s appointment could serve through 2020.

The deadline for candidates to qualify for primaries in Arizona was May 30. State law does not require that an election for a vacant Senate seat take place this year, says Eric Spencer, director of election services for the Arizona Secretary of State.

Who could succeed John McCain in the Senate?

Ducey has said he won’t consider appointing politicians who lobbied for McCain’s seat prematurely. “To the politicians out there that have been openly lobbying for this position, they’ve basically disqualified themselves by showing their true character,” he said in a December interview with KTAR News.

When asked in that interview whether he would consider appointing himself for the seat, Ducey suggested he would rather stay in his current role. “I want to find somebody whose desire is to be in the United States Senate and can serve Arizona well. I’m going to continue to serve as governor as long as the voters will let me,” he said.

Ducey is seeking re-election but faces a challenger in the Republican primary. Ducey’s primary opponent, Ken Bennett, has tried to make the Senate appointment a reason for conservatives to balk on the governor.

In the past, dozens of women have succeeded their deceased husbands in Congress. Some speculate that Cindy McCain could join their ranks.

How does the race for Sen. Jeff Flake’s seat impact McCain’s replacement?

Complicating the discussion about who Ducey might appoint to McCain’s seat is the primary for Flake’s seat on Tuesday.

At the moment, Arizona is watching two conservative candidates vie for Flake’s Senate seat. Rep. Martha McSally is the Washington-favored candidate, while former ER doctor Kelli Ward is the darling of the hard-right corner of the party that hates McCain.

It is possible both women could wind up in the Senate if Ducey appoints the loser of the primary to fill McCain’s seat.

Some of the deeply conservative Republicans in the state — the same ones who forced the state GOP to censure McCain earlier in his career for daring to work on bipartisan immigration proposals — are reluctant to entertain suggestions that Cindy McCain take the seat.

For these hard-right voters, “McCain” is an epithet, and the Senator’s passing on Saturday changes none of that. In fact, Ward continued to hammer McCain on Saturday at campaign rallies — something that could make her appointment seem crass.

Write to Katie Reilly at Katie.Reilly@time.com and Philip Elliott at philip.elliott@time.com. 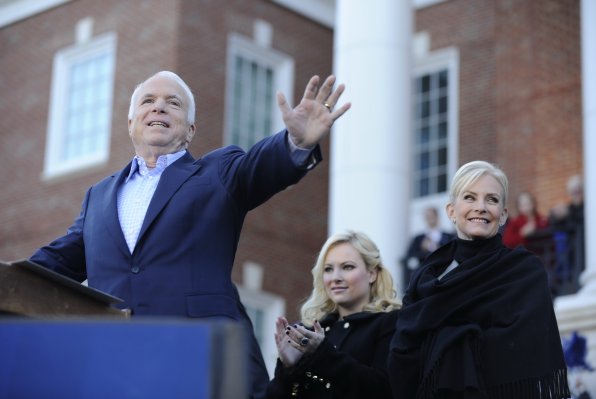 Meghan McCain Shares Emotional Tribute to Her Father
Next Up: Editor's Pick